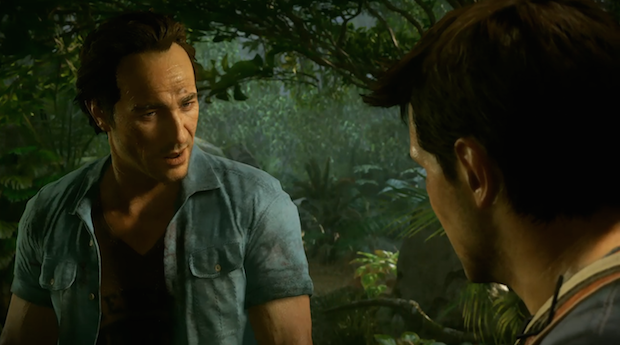 Game Informer’s coverage of Uncharted 4: A Thief’s End is rolling out, and users on NeoGAF are compiling all the information you need to know.

Naughty Dog tells Game Informer that a small team began development on Uncharted 4 almost immediately after the development of Uncharted 3: Drake’s Deception. After the completion of The Last of Us, half of that game’s team moved onto Uncharted 4 while the other half completed the Left Behind DLC.

A Thief’s End takes place three years after Drake’s Deception, with protagonist Nathan Drake having settled down with his wife Elena. Nate is then confronted by his long lost older brother Sam, who he was under the impression was dead. The story will primarily follow Nate and Sam, but series staples Elena and Victor “Sully” Sullivan will make appearances.

Throughout Uncharted 4, Nate and Sam will be competing with rival treasure hunters named Rafe and Nadine, while also dealing with internal jealousy between each other.

Naughty Dog confirmed that Nate will have access to plenty of other tools outside of the rope and piton that he used in the game’s gameplay premiere, much of which will be factored into puzzles.

A Thief’s End will also have plenty of focus on navigational freedom, with Game Informer having seen an extended demo that “showed multiple paths, one finding an extra cave, other bypassing a group of enemies.”

With Sam being alongside Nate through most of the game, Naughty Dog compared his presence in the game as akin to Ellie from The Last of Us, but more capable.

• There are 60 different animations just of Drake picking up objects.
• Talk a lot about how weight distribution plays a big role in the animations
• You can attack enemies from all sides with unique animations to them, you wont magically warp in front of them if you punch.
• Lots of talk from Druckmann on the cost of adventuring on Drake’s life, it will be a major focus of the story. Compares his addiction to treasure hunting to a drug addict.
• All the new items they added were chosen cause it can help keep the pacing and gives you a better sense of exploration and adventure.
• Cutscenes are now all real time
• Tools will be used to enhance traversal and puzzle solving
• They said the large puzzle rooms from Uncharted 3 will still be there, they say U3 had the best puzzles of the series and they want to build on that.
• TLOU moments where the characters react to what they see or read will happen in this game.
• Lots of talk about brotherly banter and building a bond between the NPC and the player, “there are some nice cooperative moments between Nate and his brother.”
• On the gigantic setpieces, this is exactly what they say “So now our concept of a set piece is ‘what’s something impactful we can do to switch expectations and how can we have it emotionally charged?’ We want to constantly surprise the player, so it can be really intimate, or really big and bombastic.”

Uncharted 4: A Thief’s End is coming to PlayStation 4 later this year. At the PlayStation Experience, Naughty Dog held a panel where it described how the studio approached bringing Nathan Drake to PlayStation 4.