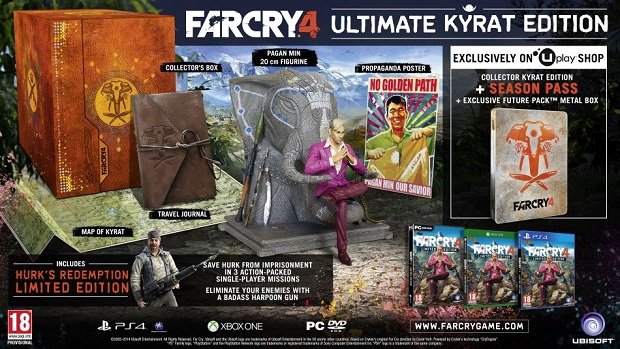 It looks like European Far Cry fans are getting a hefty special edition of Far Cry 4 when it comes out in November.

Ubisoft has announced the Far Cry 4 Ultimate Kyrat Edition, which is now available for pre-order at various outlets.

The special edition contains a collector’s box, journal, map of Kyrat, a propaganda poster and a figurine of the game’s villain Pagan Min.

Players who buy the Ultimate Kyrat Edition will get access to exclusive in-game content, including missions and weapons. If pre-ordered through the Uplay Store, the game will come in a steel case with the game’s season pass packaged in.

The Ultimate Kyrat Edition will reportedly run you £94.99.

Far Cry 4 was revealed through a Ubisoft financial meeting earlier this year. Since then, the company has showcased both the game’s villain, Pagan Min and the game’s protagonist, Ajay Ghale.

Far Cry 4 is slated for release on November 18th for PC, PlayStation 3, PlayStation 4, Xbox 360 and Xbox One.