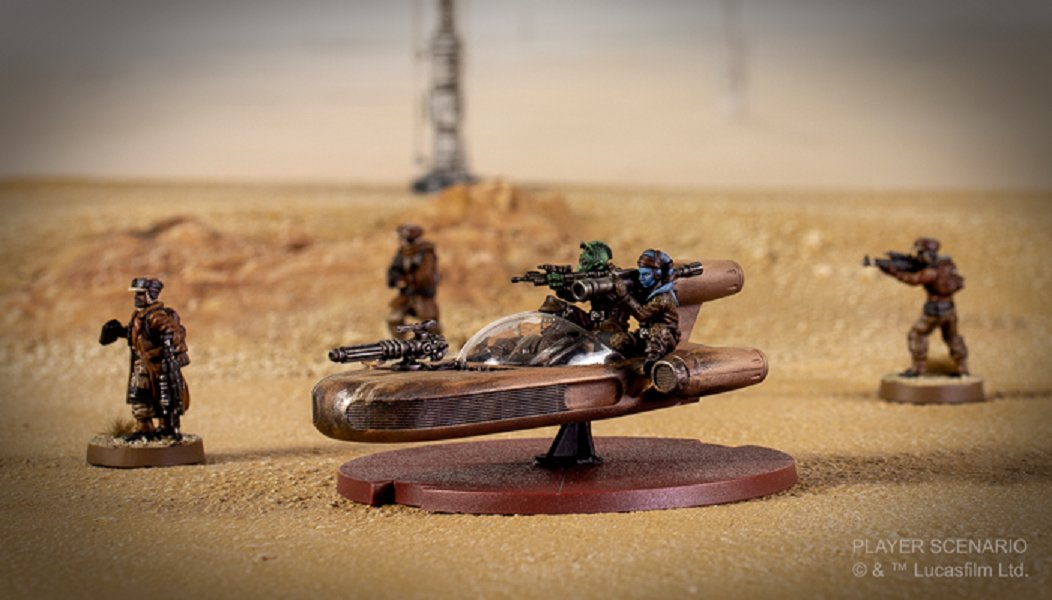 Focused more on offensive play, the TX-225 GAVw Occupier Combat Assault Tank can be equipped with both a pilot and either a DLT-19 Rifle or a RT-97C Rifle at its hardpoint, while also being accompanied with a high layer of defense, as a superior red dice can be used to block any incoming attacks.

Few symbols of Imperial occupation are more readily apparent than a TX-225 GAVw Occupier Combat Assault Tank. Heavily armed and capable of carrying either cargo or personnel, one of these tanks can be a versatile asset to stormtrooper detachments on occupation duty. With the TX-225 GAVw Occupier Combat Assault Tank Unit Expansion, you’ll find a single finely sculpted, menacing TX-225 miniature that can work in tandem with your ground troops to impose the Empire’s will wherever it’s been assigned. This beautiful miniature is accompanied by the full assortment of unit cards, upgrade cards, and tokens that you’ll need to add one to your armies.

To make do with what they can, the Rebel Alliance converts civilian vehicles into weapons of war. The X-34 Landspeeder focuses more on speed, moving at speed 2 while performing a compulsory move when it activates.

Already a speedy craft thanks to its powerful repulsor engine, an X-34 Landspeeder becomes a threat to even the toughest Imperial opponents when driven by an experienced pilot and equipped with an assortment of weapons. The X-34 Landspeeder Unit Expansion adds one X-34 landspeeder miniature—complete with two unique weapon options—to your Rebel armies. Along with the beautifully sculpted, finely detailed miniature, you’ll find a unit card and all the tokens you need to get your X-34 up and running, as well as a range of upgrade cards to customize it to your specific battle plans.

Both the TX-225 GAVw Occupier Combat Assault Tank unit and the X-34 Landspeeder unit will be released as separate expansions in Q2 2019. For more information on Star Wars: Legion, visit the official Fantasy Flight Games website.