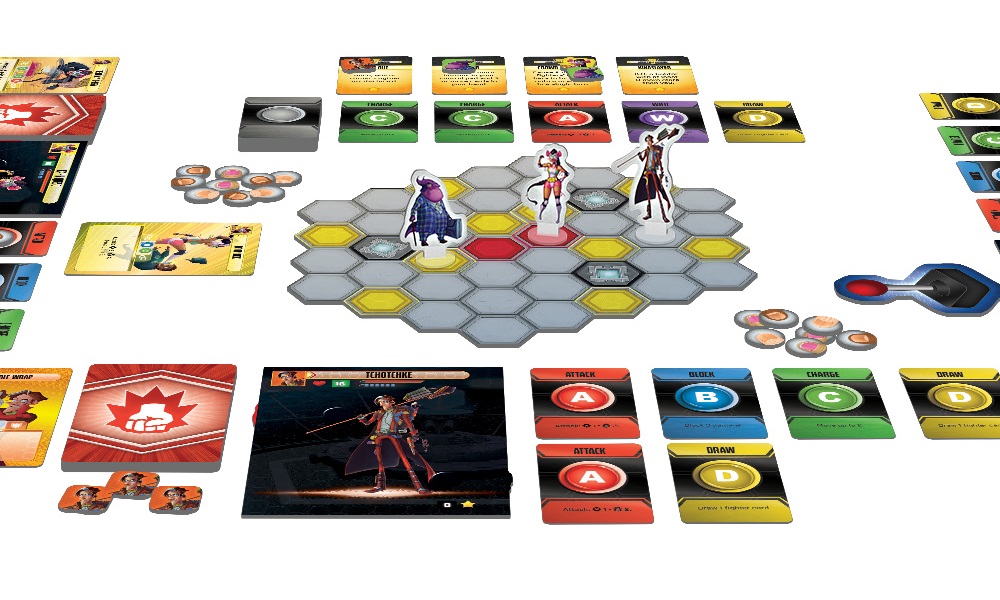 Fighting games and table top games combine to create Super Punch Fighter, a competitive game for up to six players. For players that prefer a more cooperative setting, there is also a mode of play where they take on waves of enemies.

Each fighter will have their own deck with a variety of moves. These moves can be one of five buttons: Attack, Block, Character, Draw, and Wild. The first player to reach 9 stars is the winner, and stars are earned by either knocking opponents off the stage or completing achievement cards. Like traditional fighting games, buttons can be hit together for combos.

Any fighting game pro will tell you that hitting buttons is fun, but the serious damage is found in combos! Play cards from your hand by paying the button cost of the card. Fighter cards are very powerful and unique to your fighter! You can play multiple fighter cards on your turn so long as you have the buttons to pay for them, and the best part is they can also be combo’d together! If the last button on a fighter card matches the first button on the next card you play, you only need to put a thumb token on that button once! Pick the best cards to string together for a super-powered hit!

In addition to standard mode is Minion Rush, a special mode that can be played alone or with a partner for cooperative play.

In addition to the frantic fighting gameplay of standard mode, Super Punch Fighter also includes Minion Rush, a bonus cooperative stage for 1-2 players! Test your luck and hone your skills as waves of minions try to overwhelm the board! Total your stars at the end and determine your rank, from lowly amateur all the way up to Grand Champion!