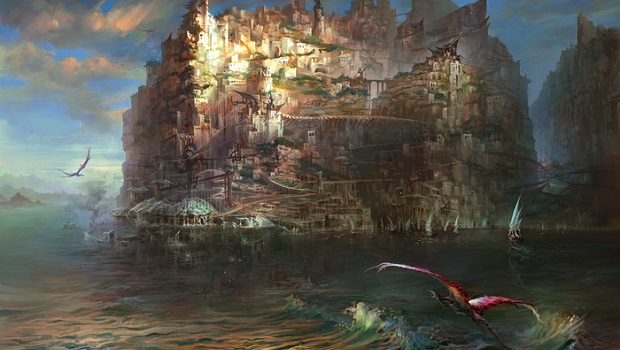 If you have any interest in old-school RPGs, you’ve probably been waiting with baited breath for news of the upcoming Torment: Tides of Numenera, the  almost-but-not-quite sequel to the legendary Torment: Planescape.  You might have been thinking, “it’s too good to be true, it’ll never get enough funding to be released.”  Fear not, my friends, for by the grace of Kickstarter will your dreams be fulfilled!  Yes, that’s right, Torment’s Kickstarter campaign is now live, and boy, is it going strong.   When I checked this morning it had over a third of it’s $900,000 goal, and it’s still rising.

Ifyou’ve never heard of Torment, you’ll find a bit of info on the game’s Kickstarter campaign.

Torment: Tides of Numenera is a game set in the world of Monte Cook’s new tabletop RPG setting, Numenera. Torment continues the thematic legacy of Planescape: Torment, a critically acclaimed role-playing game from 1999 that’s considered by many to be a hallmark for storytelling in computer RPGs. With Torment, we’re striving to create a rich role-playing experience that explores similar deep, personal themes. Here’s the scoop:

There’s also a really amusing trailer released by inXile, which lampoons the current development practices of bigger publishers before moving on to pushing why the developers are so excited to work on a new Torment game.  Be sure to check out the trailer below, and if you have any more questions, head over to the Kickstarter page, which is fairly detailed and actually a surprisingly good read.

I don’t think we need to worry about this game not making it’s goal, though. In the 15 minutes I’ve spent writing this article, over $100,000 dollars has been added to the campign total.  If you’re going to donate, you better get over there quick!