Asmodee have announced a partnership with the Breast Cancer Research Foundation, which has led to the release of Ticket to Ride: Play Pink. A portion of all sales of this new release will be given to the foundation. This limited edition train and station set is available for pre-order now. You can check out a trailer above and full details below:

Paris, France – September 27, 2021 – Asmodee and Days of Wonder, the publisher of hit board game Ticket to Ride, and the Breast Cancer Research Foundation (BCRF) just announced their world premiere partnership, with a first in the board game industry: the release of an exclusive train set in-theme with the classic pink coloring of the BCRF. All profits from the sales of this special edition will go to support breast cancer research. Ticket to Ride: Play Pink is a limited edition Train & Station Set available for preorder on the Asmodee store for $5/5€, and will ship in October. This new set of trains can be used across Ticket to Ride properties, with all trains and stations ready for use in both Ticket to Ride and Ticket to Ride Europe sporting the classic pink coloring. 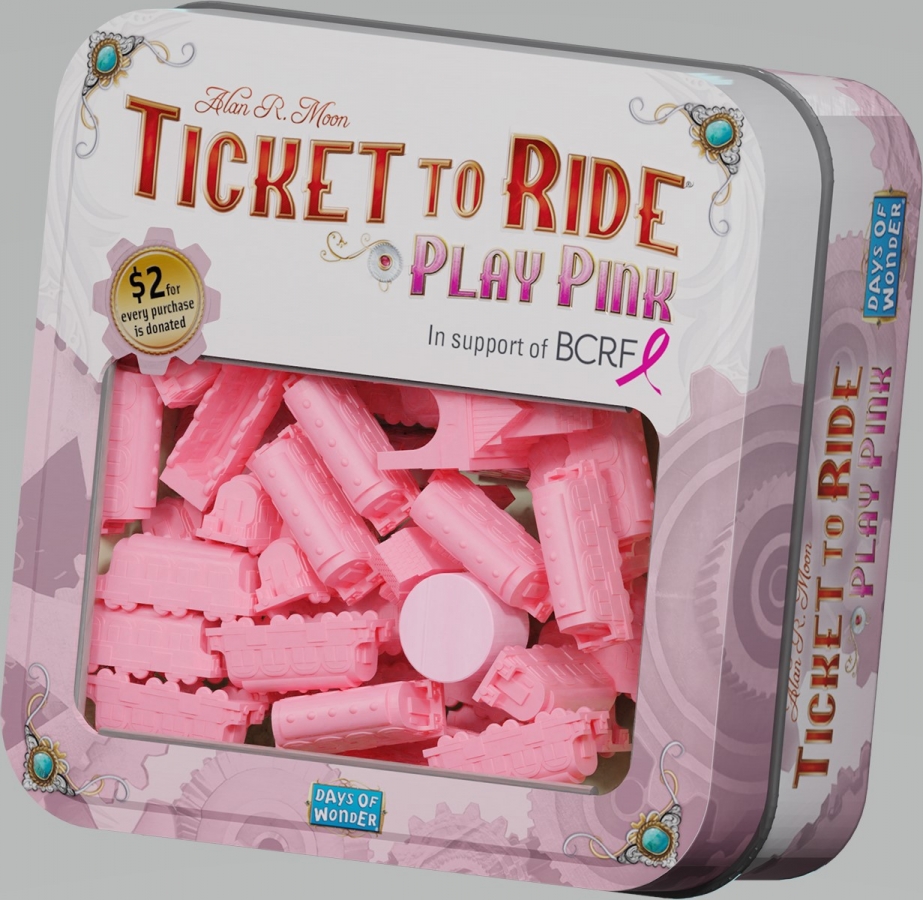 A Train Ride to the Top

Ticket to Ride, created by Days of Wonder studio, is a franchise that is enjoyed by more than 80 million players worldwide. The game has become a cultural icon, with appearances on TV shows including Big Bang Theory, IT Crowd, and Blacklist. In addition, celebrities like Emmy Rossum (Shameless), Jennifer Garner (Juno), and noteworthy pop culture icon Wil Wheaton all play and enjoy the game.

Ticket to Ride can be enjoyed by new players and experts alike with its easy-to-learn strategic gameplay, making it a staple in family board game nights. As one of the world’s most popular and critically acclaimed board games, the Ticket to Ride franchise has won more than 37 awards and accolades across all of its titles including a Game of the Year Award from Spiel des Jahres and the coveted As d’Or award from the International Games Festival.

Since Ticket to Ride made its debut in 2004, the game has expanded beyond the table and now has digital versions available on iOS, Android, PC, and home video game consoles. Overall, more than 10 millions copies of Ticket to Ride have been sold. An international phenomenon, Ticket to Ride has been translated into 33 different languages and is distributed in more than 40 countries. 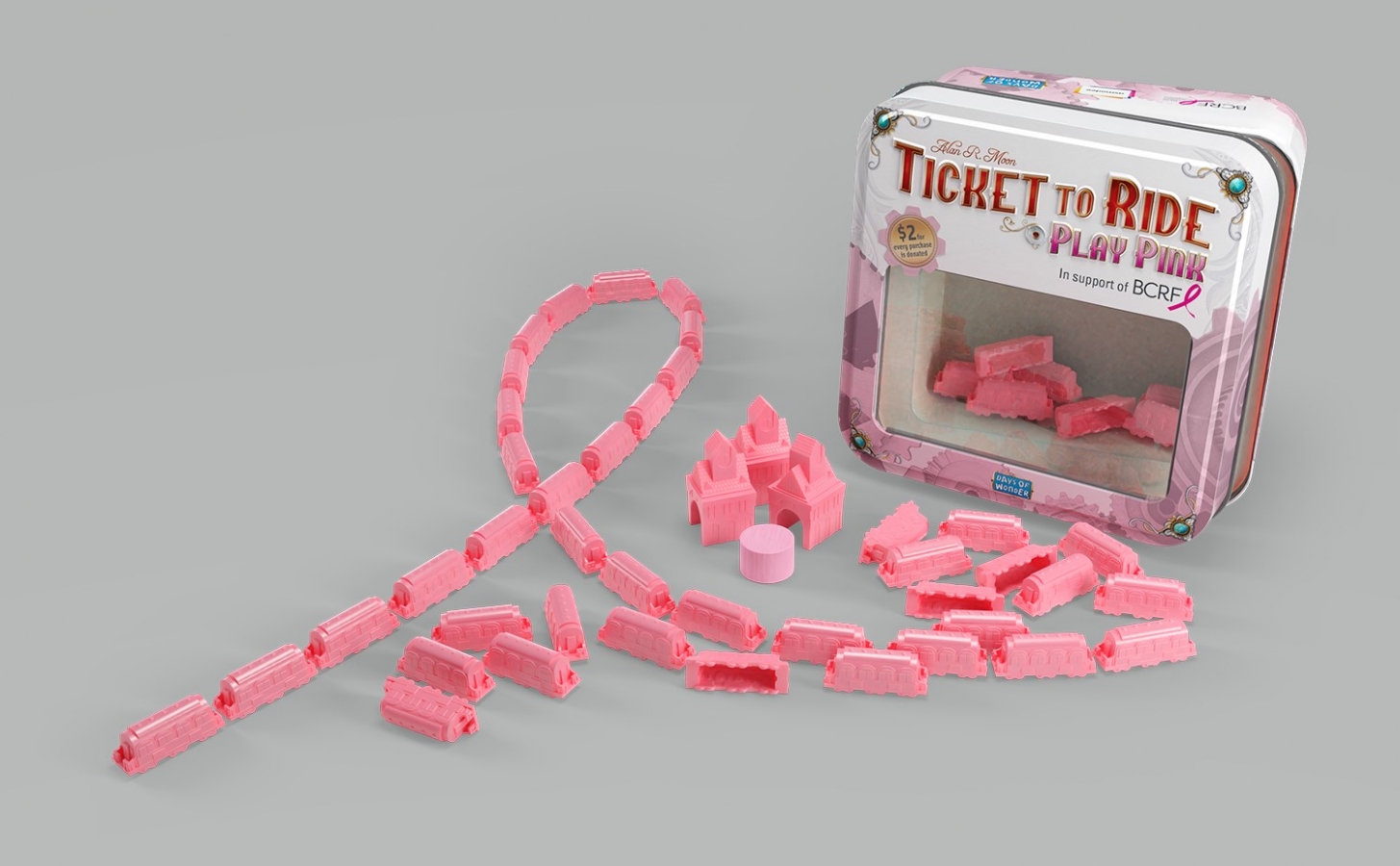 To support an important cause

Ticket to Ride: Play Pink is a fundraising project led by publisher Days of Wonder, part of Asmodee, in 18 countries around the world to support breast cancer research. This limited edition set has been printed in pink, the official colors of the BCRF, and has a unique train shape making it a must-have for collectors and new players alike.

The entire production system has been modified to support this important cause and Asmodee commits to a non-profit approach with the game, meaning all profits will be redistributed to the BCRF. For each set of trains sold, $2 will be donated to BCRF. The $5 price tag covers the cost of logistics and production only, with no revenue being collected by Asmodee or Days of Wonder. 80,000 Ticket to Ride: Play Pink sets will be available during Pink October.

“As a major player in the games and entertainment industry, we believe it is our duty to lead the way and help important causes like the Breast Cancer Research Foundation. We know how board games can bring families together in difficult times, and we hope that players all across the world will support breast cancer research by playing Ticket to Ride with this exclusive new set” said Stéphane Carville, CEO of Asmodee.

With an international foundation

The BCRF is a nonprofit organization committed to preventing and curing breast cancer by advancing the world’s most promising research. In 2020-2021, BCRF will award $40 million in annual grants to 275 scientists from top universities and medical institutions around the globe, enabling them to pursue groundbreaking research leading to new treatments, new methods of prevention and new insights into the disease.

Breast cancer is the most common diagnosed cancer in the world, with 1 in 8 women being diagnosed sometime in their life. This prevalent disease puts a strain on families, friends and communities from every walk of life worldwide.

Stay tuned to Gaming Trend for more info on Ticket to Ride: Play Pink and for all your gaming, tech, and entertainment news!