Thrustmaster and Boeing have teamed up to create innovative new flight peripherals. Check below for details and pictures:

Rennes, November 9, 2021 — Having initially unveiled their buzzed-about new concept to the community at Flight Sim Expo 2021 (FSE) in San Diego on September 25, Thrustmaster is now pulling back the curtain and providing more details regarding their new line of products officially licensed by both Boeing and Xbox®.

Following their first highly successful collaboration with the legendary American aerospace company, with the launch of the groundbreaking F/A-18C Hornet™ HOTAS Add-On Grip, Thrustmaster is now applying full throttle to this all-star partnership by releasing its TCA Boeing Edition range.

An exciting new flagship endeavor for Thrustmaster, the TCA Boeing Edition range features unique, exclusive, and proprietary technologies integrated with a specific goal in mind: allowing users to replicate the controls, flight kinematics and sensations experienced by real Boeing pilots at the controls of a Dreamliner — right from the comfort of their favorite desk or table. This previously inaccessible yet highly aspirational world of civil aviation is now within reach for the entire flight sim community. 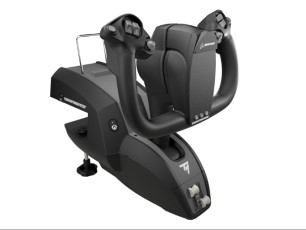 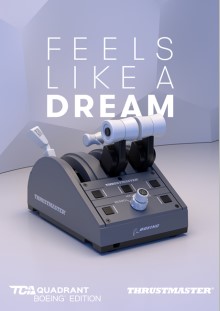 Built around the idea of making a brand-new flight simulation experience possible for users, the major challenge involved in designing this product was to be able to reproduce the sensations of using a floor-mounted Boeing pendular yoke for simmers using their gear on a desk or table.

The TCA Yoke Boeing Edition’s floor-mounted/suspended design, validated by real life pilots, mirrors the different iconic details and features of real-world Boeing yokes in order to provide simmers with a feel that’s as close as possible to the real Dreamliner experience — without any sacrifices in terms of performance or realism when piloting more modest aircraft.

Here’s a breakdown of some of the key points and technical features integrated within the TCA Yoke Boeing Edition:

Much more than a sidekick to the TCA Yoke Boeing Edition, the TCA Quadrant Boeing Edition plays its own important role in this brand-new flight simulation experience.

Developed as an ergonomic replica of the legendary Boeing throttle quadrant, TCA Quadrant Boeing Edition incorporates all of the iconic features required for proper piloting of airliners, as well as more modest private planes.

With 3 axes and 17 action buttons plus an encoder for very extensive mapping possibilities both on the ground and in the skies, TCA Quadrant Boeing Edition stands out thanks to its unique progressive-resistance feel — just like on real Boeing airliners.

Highly versatile, the throttle quadrant features 4 fully swappable levers, allowing for use of the aircraft’s speed brake, flaps or thrust levers, depending on the circumstances.

TCA Quadrant Boeing Edition also gives users the option to pair 2 units together and step up to a whole new level of piloting: 6-axis flight.

Like its Boeing-licensed yoke counterpart, the TCA Quadrant Boeing Edition:

Features proprietary H.E.A.R.T™ magnetic technology for surgical precision (16-bit resolution on the main axes)
Lets simmers use the device in conjunction with the Thrustmaster Pendular Rudder (TPR)** or the Thrustmaster T.Flight Rudder Pedals (TFRP)** on Xbox® and PC 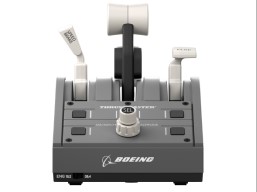 Check out the official Thrustmaster website for more information:

Be sure to follow Thrustmaster on social media to stay up to date with all of the brand’s latest gaming-related news: