How are you enjoying your Xbox Series X consoles? If you’re one of the fortunate few to pick one up today (or the PlayStation 5 this Thursday), 2K and Gearbox have just announced that its Borderlands 3 Next-Level Mayhem upgrade is now available on Xbox Series X, with the PlayStation 5 version available on Thursday. In addition, the companies have announced new content in the form of a Season Pass 2 and also new cosmetics.

2K and Gearbox Entertainment today re-launched their critically acclaimed looter-shooter, Borderlands® 3, releasing new content, cosmetics, and retail editions, as well as an upgrade that optimizes the experience for next-generation consoles.

Borderlands 3’s next-gen upgrade is now available on the Xbox Series X|S. It will also be available on the PlayStation® 5 when the console launches on November 12 in the U.S., Japan, Canada, Mexico, Australia, New Zealand, and South Korea and on November 19, 2020 in the rest of the world.

Borderlands 3 has been fully optimized to take advantage of the next-gen consoles’ processing power, bringing a new level of graphical fidelity to the Borderlands universe. The Xbox Series X and PlayStation 5 display Borderlands 3 at up to 60 frames per second in 4K resolution during single-player and online co-op, and all next-gen consoles support three- and four-player split-screen for local multiplayer. In addition, vertical split-screen for two-player local co-op is now available on PlayStation 4, Xbox One, and Xbox Series X|S and will be available on PlayStation 5 as soon as the console launches.

All players who own or purchase both a copy of Borderlands 3 and a next-gen console will be able to download the next-gen upgrade within the same console family for free. All add-on content and save files can be ported to next-gen consoles within the same family, so players can jump back into the action right where they left off. Players who own a physical disc of Borderlands 3 will need the Xbox Series X or standard PlayStation 5 console model that includes a disc drive to take advantage of these features.

Today also marks the launch of Designer’s Cut, a brand new Borderlands 3 downloadable add-on that creates new ways to play by introducing an additional Skill Tree for each Vault Hunter and Arms Race, a roguelike experience that’s fast-paced, challenging, and consistently remixed by randomized elements. By putting the focus squarely on guns and gameplay, Arms Race makes every loot drop meaningful and exciting. Meanwhile, players looking for fresh ways to experience Borderlands 3’s shooting and looting can wield the power of the additional Skill Trees to develop their own unique Vault Hunter builds. Each Skill Tree offers an exciting new Action Skill, as well as novel passive abilities.

Both Season Pass 2 and Designer’s Cut will also be available on PlayStation 5 starting November 12 in the US, Japan, Canada, Mexico, Australia, New Zealand, and South Korea and on November 19 in the rest of the world. Director’s Cut – which includes additional missions, end-game content, and behind-the-scenes extras – is planned for release in spring of next year. Season Pass 2, Designer’s Cut, and Director’s Cut require a copy of Borderlands 3 to play. 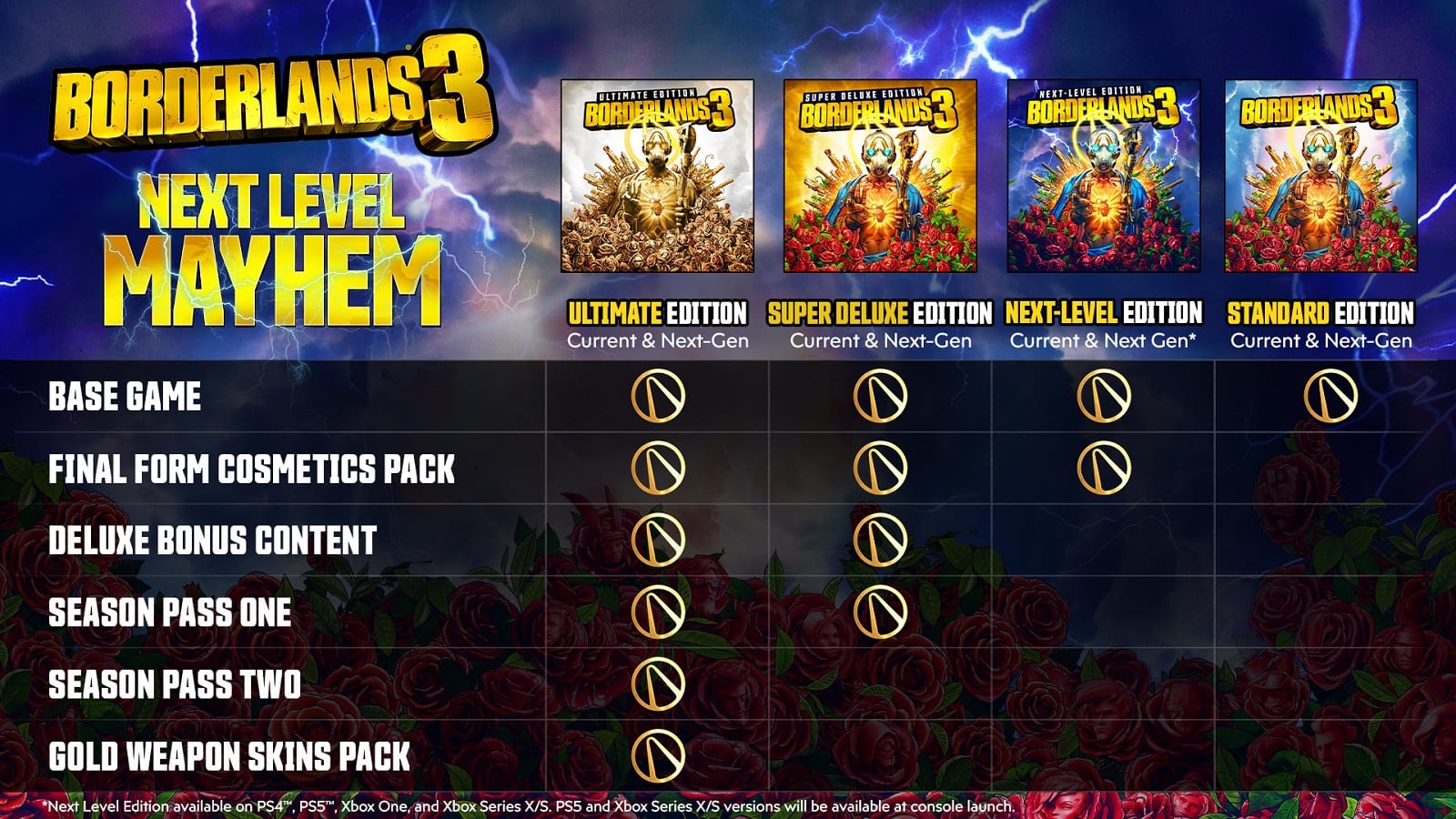 In addition, 2K and Gearbox today released the Multiverse Final Form cosmetics packs. Unlike any previous cosmetics add-on, these packs provide four entirely new character models, one for each Vault Hunter. The Final Forms depict how the characters might have turned out in an alternate universe where they never became Vault Hunters. These new cosmetics can be mixed and matched with other Bodies and Heads as desired and can also be paired with all existing skins.

The Multiverse Final Form cosmetics packs are now available as part of Season Pass 2, though players can also acquire these packs by purchasing the brand-new Borderlands 3 Ultimate Edition, which delivers the quintessential Borderlands 3 experience. Ultimate Edition grants owners access to the award-winning base game, multiple bonus cosmetic packs, and both the original Season Pass and Season Pass 2, which combined will offer six exceptional content add-ons. Players can also now purchase Borderlands 3 Next-Level Edition, a new console-only version that includes the base game and the Multiverse Final Form cosmetics packs.

Finally, as a thank you to everyone who has maximized their mayhem thus far, the Multiverse Final Form cosmetic packs have been granted to all present and future owners of Borderlands 3 Super Deluxe Edition or the original Season Pass (requires a copy of Borderlands 3 to play), with no additional purchase necessary. 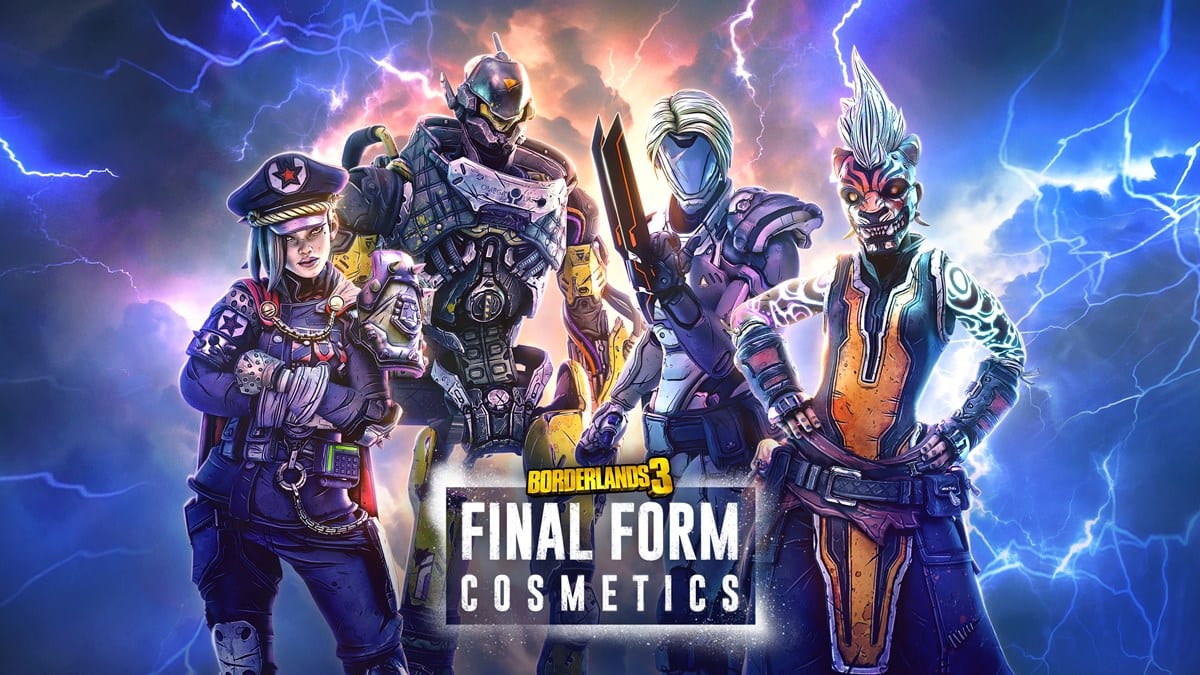 Check out our review of Borderlands 3, and stay tuned for more news here on Gaming Trend.