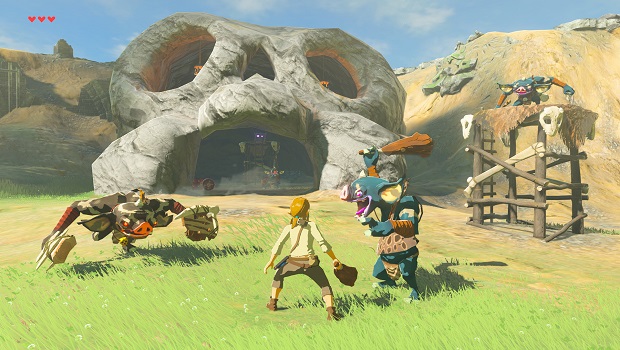 Today, Nintendo announced more details for the first DLC of the critically and commercially successful The Legend of Zelda: Breath of the Wild. Entitled The Master Trials, the DLC expansion will be released this summer for the Nintendo Switch and Wii U as part of a $19.99 bundle of two DLC packs.

“Whether you have already completed the adventure or are just getting ready to paraglide into Hyrule for the first time, this new downloadable Expansion Pass makes this massive game even bigger and more engrossing,” said Doug Bowser, Nintendo of America’s Senior Vice President of Sales and Marketing. “We are always looking for new ways to provide fun and exciting experiences for our fans.”

In The Master Trials, players can access the Trial of the Sword, where enemies appear one after another. Players will have to start out with no armor or weapons, and can only proceed to the next room after defeating all enemies. After completing a grueling 45 levels, players will be rewarded with a fully-powered Master Sword, which will always be in its glowing powered-up state.

In addition to this challenging location, Hard Mode will be included as well, where the ranks of enemies will be increased, and higher-ranking enemies will be present where they previously weren’t during normal play. Enemies will be tougher to sneak up on, and floating planks being held by balloons will be scattered around Hyrule; players can reach these planks to collect treasure.

While The Master Trials include a host of challenging quests, there are some features in the DLC which will assist players who are having a difficult time with the game. Hero’s Path Mode will document every step players take, and chronicle the last 200 hours of play time. This will help identify any unexplored shrines left in Hyrule. Additionally, a Travel Medallion will grant Link a new temporary travel point where he stands; one point can be registered at a time. Thirdly, a Korok Mask will help players with Korok locations on the map.

Finally, eight new pieces of equipment inspired by previous Legend of Zelda games will be available to discover after downloading the first DLC pack. Costumes are based on characters such as Midna, Tingle, Phantom and Majora’s Mask.

The Legend of Zelda: Breath of the Wild is available now on Nintendo Switch and Wii U. You can check out our review here, and stay tuned for more news here on Gaming Trend.