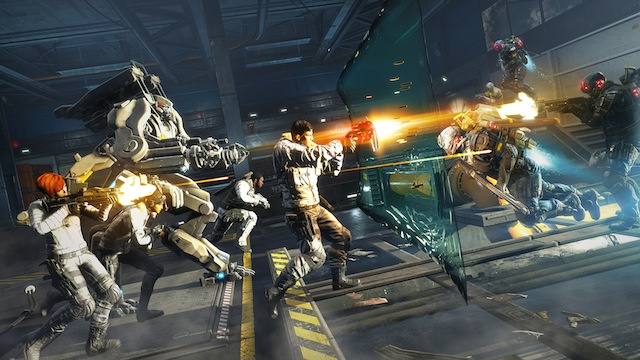 Electronic Arts and Insomniac Games announced the upcoming shooter of Fuse on May 28th in a press release. Fuse is a four-person, co-op shooter where elite covert agents join forces to protect mankind from the deadly alien energy known as Fuse.

Players can assume the role of Dalton Brooks, Izzy Sinclair, Jacob Kimble or Naya Deveraux. Each of them is equipped with their own Xenotech weapon and unique skill set to save humanity. The Xenotech-based weapons are powered by an unstable alien substance that allows unique capabilities and deeper strategic options both in and out of combat.

“Insomniac Games is known for delivering best-in-class weaponry that breaks the mold of traditional video games – and Fuse is no different,” said Ted Price, CEO and Founder of Insomniac Games. “These Xenotech weapons further the innovation players will find in this unique, action co-op shooter. We can’t wait to bring Fuse, our first multi-platform game, to gamers worldwide this May.”

The game allows players to experience the attributes of all four characters through the LEAP system that allows the player to switch between the four characters, even during combat. The characters each have their own path that allows for more-powerful abilities to be unlocked as they go deeper in the game. Progression is unified so players can still bulk up their agents regardless of whether they play online or offline.

The game will be released on both XBox360 and PS3.