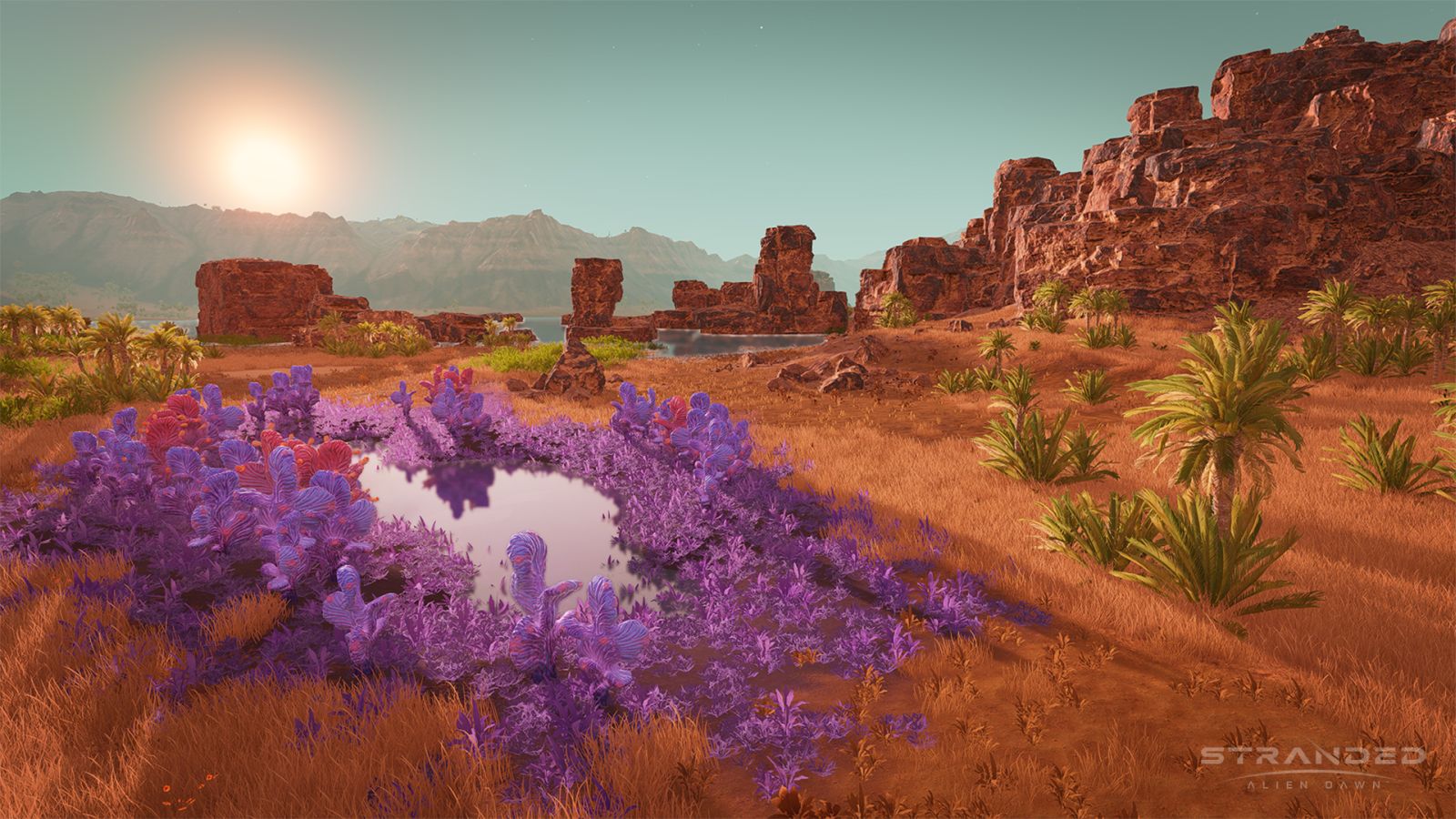 Developer Haemimont Games could be winding down for the holidays, but clearly they have more to show in their Early Access game Stranded: Alien Dawn before they do. We took a look at the game’s current state in Early Access just over a month ago, but honestly the game has been progressing so rapidly that you could almost discard it in favor of this newest update preview. Just the same – my hands-on preview will get you up to speed before we talk through what’s coming shortly.

This newest update for Early Access, entitled Dunes & Moons, is introducing an entirely new biome — Desertum. It’s also dropping in three new moons, a fresh scaling of the overall difficulty, and an all new survivor who could help you survive just a touch longer in this new desert-like environment.

As before, you’ve crash landed on the surface of a planet, along with several other survivors that you can select from an ever-growing roster. Freeing yourself from the wreckage, you’ll then have to deal with their personalities and quirks, while trying to lean on their advantages to survive. Now, when we played the game before we landed in a relatively nice biome, full of building materials, plants, and animals. Sure, some of those creatures want to turn you into a meat slurry and drink your entrails, but it really is a nice looking place.

This new biome isn’t that.

Crashing on a new biome called Desertum is bad enough, but having a blistering sun beating down on you before you’ve crafted your first shelter is that much worse. Looking around, wood is scarce, as are the rest of the basic construction materials beyond rocks. Seasons are more severe, and dust storms are as frequent as they are debilitating. It’s also hot — very, very hot. You can expect that everything soft will wilt under the intensity of the sun, including you, so make sure you don’t stray from shelter until you are properly equipped.

To help you survive, you’ll have a new desert survivor to bring with you. The team you create is, as before, up to you, but without a desert survivor among them it might be a short and fatal trip. A good guide is hard to find, and Sora Satoh is the best and only choice you’ve got. Able to shoot twice as fast with ranged weapons, she’s also more resistant to the highs and lows of desert survival, able to handle a +/- 10 degree swing without a problem. She’s also combat-focused, so she’s a trooper in the field. Unfortunately, however, she refuses to eat meat. Just one more quirk to deal with on the planet’s surface. 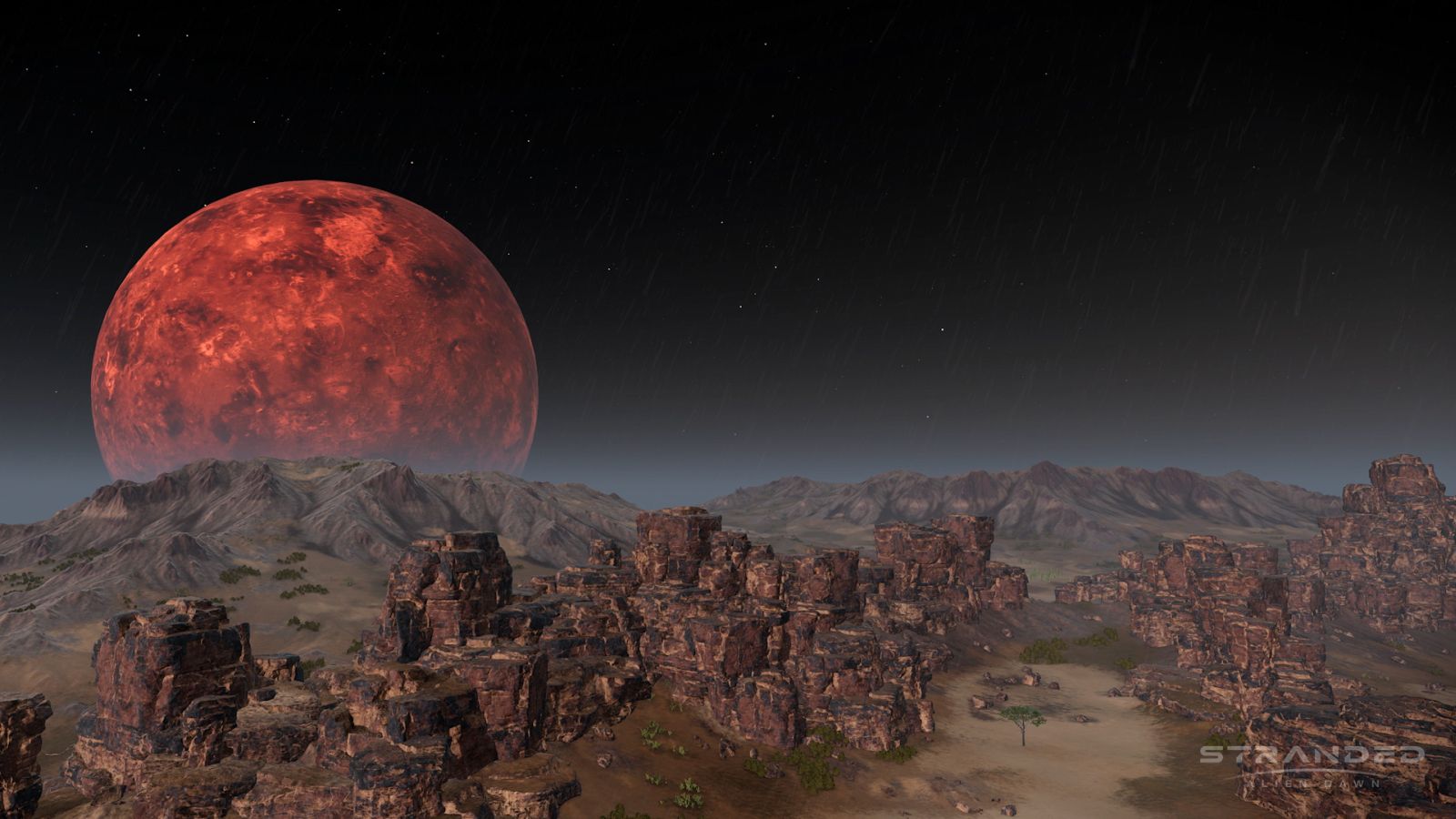 The thing about desert survival is that most folks focus on the heat, but that’s not even half of the battle. As scarce as building materials are, food is even more rare. You didn’t land with weapons though, so you’ll need to prioritize trying to recover some from the crash. The next thing you’d better handle is that camp fire though. People always think of the heat when they imagine a desert, but the brutal cold at night can kill you just as quickly.

Looking to the skies, there are three moons on Desertum, and they can impact a great many things in your world. The Jason moon (they are named after Greek gods) is going to offer you the best chances of survival, giving you a more steady climate in the beginning, though it will eventually scale up to the same brutality as all the others, eventually. Nyx changes what sort of events happen at night, as you can imagine, and you can expect that the things that howl and scurry might just come take a bite when the sun sets. The Chaos moon is…well, chaotic. Events can be positive or negative, but they will always be difficult tradeoffs. 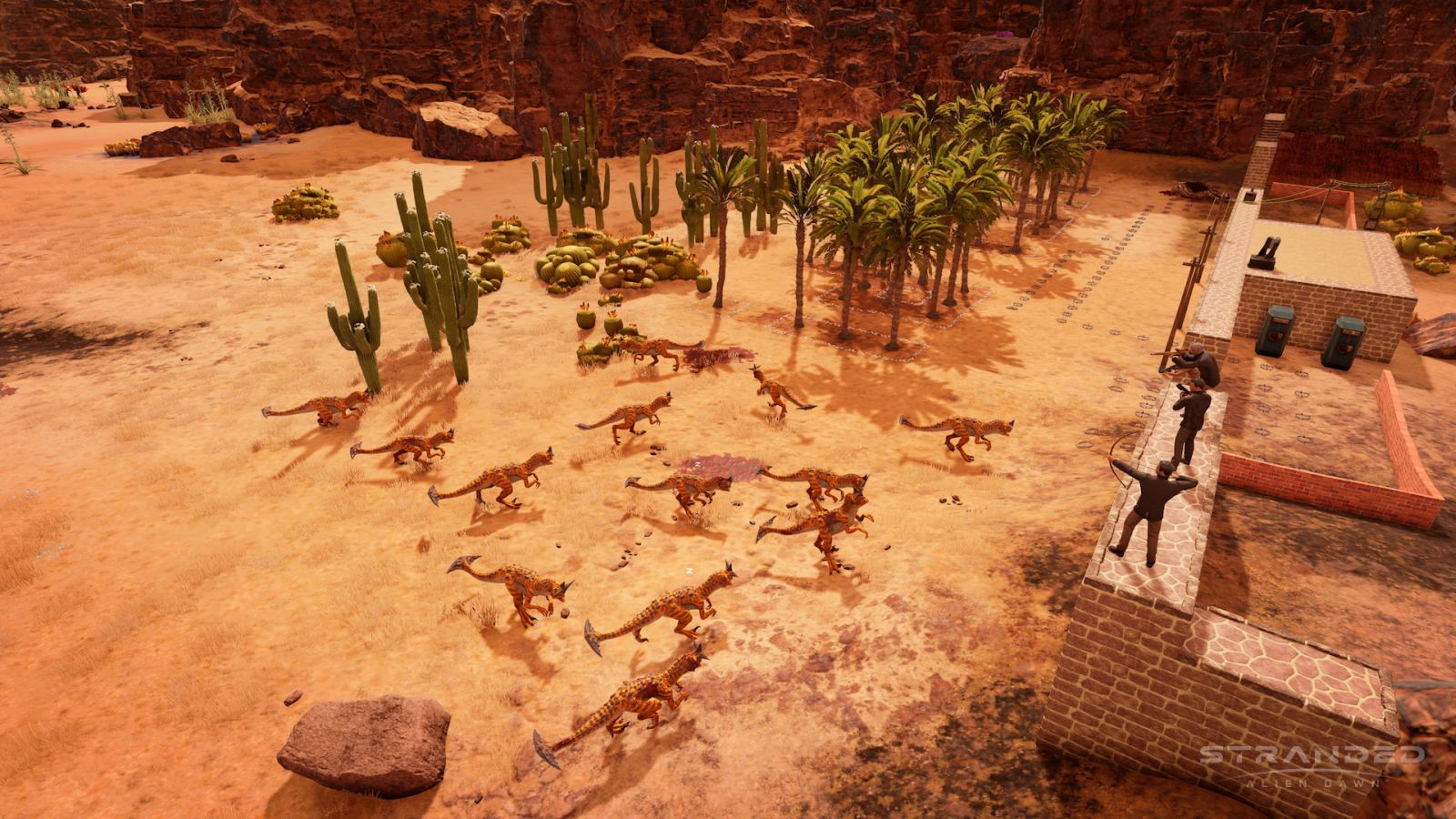 Reading this, you are probably either thinking “Yes! I love the way this is gonna kill me!” or “Can’t this game just give me a break already?!”, and to that end I bring good news as Haemimont loves both of you equally. The difficulty for Stranded: Alien Dawn can be scaled up to a very hard and insane difficulty, but also down to a peaceful one. Very Hard and Insane obviously crank up the random events, amp the monster damage, and generally just turns all the knobs up to 11. Peaceful slows things down a bit, stopping the relentless onslaught of creature attacks in favor of focusing on the building and research aspects of Stranded.

It’s still early days for Stranded: Alien Dawn, and it’s already clear that Haemimont is working at a frantic pace on this one. The improvements have been frequent and impactful, and this newest update seems to be the most significant so far. Keep an eye on Gaming Trend as we continue to die in new and inventive ways in the run up to release.

Stranded: Alien Dawn is out in Early Access on PC.