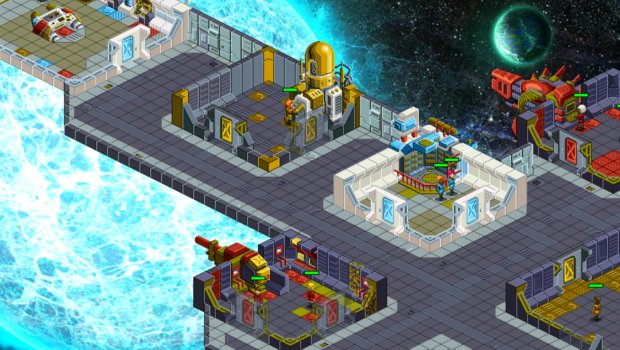 Star Command, the pixel-art-heavy game that was a kickstarter sensation at the time, has finally been released for the iOS. Pretty big news for those of us who have been looking forward to this game since its initial funding success – not to mention for anyone eager to get some sci-fi action in on their tablet. I’ve spent a few hours poking around in the game as of now, and I can report this much: the pixel art is top-notch where it’s used, complete with some really pleasant animations. The general concept is solid. For $2.99 straight out of the app store, it’s worth it for anyone who’s been craving a little bit of strategy. But as of this build the initial impression I’m getting off it is that it’s FTL with much more graphical and audio content, with the tradeoff of far weaker gameplay.

It feels almost like heresy to knock Star Command at all. It’s a very solid game, a steal for the price, and it’s refreshingly unique – sci-fi games tend to be smaller in number than fantasy, and sci-fi with a realtime strategy twist all the more. Like FTL, the meat of the game is the ship to ship combat: you not only have to exchange fire with the enemy vessel, but you also have to deal with fire outbreaks, hull breaches, and enemies invading your ship with hostile on-foot forces. You can upgrade your ship’s capabilities, you can recruit and assign crew who will gain experience over time, and you can individually give orders to said crew during conflicts. Even if the art style and music is considerably different, you can see why it’s inevitable that Star command is going to end up being compared and contrasted with FTL.

But when those comparisons are made, Star Command ends up getting the worse end of the stick. While the ship in Star Command has a superior graphical presence, you don’t get nearly the options you do in FTL. No locking enemy invaders out of key rooms to at least buy some time while you prepare to deal with them. No intentional opening of airlock doors to put out fires or choke oxygen-needing life forms. The diversity of weapons and subsystems you can acquire are far more limited, and it seems like your crew choices differ only in their initial appearances. The game also mimics FTL in terms of difficulty – in fact, it actually seems like a far more difficult game in that respect. Hull breaches don’t just suck the air out of a room – if your crew is anywhere near a hull breach, you can count on their being immediately sucked out into space and killed. If your captain dies, you can’t simply swap in another crewmember to replace them – your game is over. This is balanced somewhat by Star Command having a save system, in fact a save system that automatically saves after each successful conflict.

On top of the difficulty, the controls leave something to be desired. Star Command requires micromanaging of your crew – most conflicts involve on-board invasions that you have to deal with, and they almost always have a group of hostile forces sent your way. With ten crew maximum (at least thus far – I’m not sure it ever goes much higher), you’re going to be juggling your security and science personnel (the latter of whom act as healers) to deal with these threats. Positioning these tiny characters over and over ends up feeling like a hassle, and the game feels like it could really use a mechanic to draw a box and move multiple friendly units at once. Finally, running this on an iPad 4 with the latest OS installed, I’ve had some crashes – mostly at the point where enemy forces initially teleport in.

I’m focusing on the negative here, but don’t get me wrong. This is still a great game. It feels like Star Command hasn’t reached its full potential, but the graphics are superb, the audio is top-notch, the diversity of aliens is impressive and the animations are a joy to watch. It’s fun to play. For $2.99, if you’re into realtime tactical games with a sci-fi twist, you really don’t have any better alternatives on the iOS right now. But after playing around with it for a few hours, some flaws have become apparent. Here’s hoping some of them get ironed out in updates.