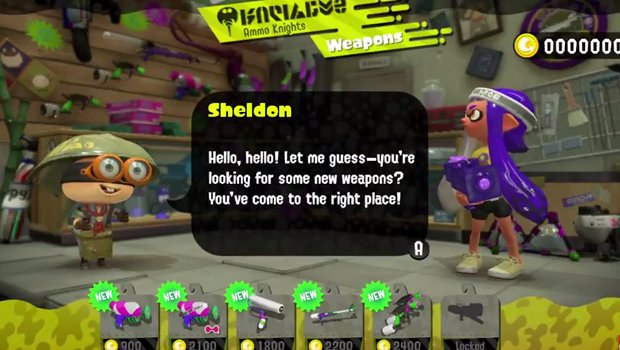 This morning’s Splatoon Direct unveiled a number of new gameplay features in the upcoming Splatoon 2, as well as returning elements with minor changes. This article details the latter.

First, equipment works essentially the same way as in the original Splatoon: different items have different effects, with some capable of acquiring new abilities. The difference this time, though, is that the secondary abilities are not random; you can choose them by speaking with a character called Murch. A number of gear abilities from the original Splatoon return, such as Ink Saver, Ninja Squid, Ink Resistance, Quick Super Jump, and Swim Speed Up. Weapon kits are still tied together—you can’t mix and match main, sub, and special weapons. All of the main weapon types—Shooters, Chargers, Rollers, Splatlings, Sloshers, and Blasters—return, some with new features, and a few entirely new weapons have been added as well.

Next, gameplay modes were covered. Turf War, Tower Control, Splat Zones, and Rainmaker modes from Splatoon all return. Tower Control now has checkpoints where the tower stops temporarily when passing through for the first time, making it more difficult for one team to win the battle all at once. The Rainmaker weapon now functions like a chargable grenade launcher instead of generating an ink cyclone. The latter three modes each have their own separate ranks now; if, like me, you’re terrible at Tower Control, that won’t affect your Rainmaker rank. A truly outstanding performance can allow a player to raise their rank multiple steps at a time. A variation of Ranked Battles, called League Battles, allows you to co-op with either one or three registered friends. Your wins and losses while playing League Battles for up to two hours constitute your score, which can earn you in-game medals.

Single-player mode returns, now led by Callie and Marie instead of Cap’n Cuttlefish. In this mode, the player once again faces the Octarians. This time, you can choose your weapon instead of just having one specific shooter that’s not usable outside of this mode.

Additionally, Splatfests, global Splatoon events where players pick one of two teams to support based on a personal preference question, will occur occasionally for two full years, twice as long as in the original Splatoon. The first, coming up on July 15 (slightly before the full game’s release, accessible as a free demo), will be Team Cake vs. Team Ice Cream.

Cake or ice cream…which will you choose?