AZADI‘s Kickstarter campaign is now live. AZADI is the sequel to Memesys’s Studio’s SHASN, a political strategy board game covering real-world events. Read below for more info on the expansion!

Memesys Studios Announces Sequel To SHASN, The Blockbuster Board Game!

SHASN, the epic political strategy board game, made headlines when it was released two years ago. SHASN became a breakout success after launching on Kickstarter, raising over half a million dollars and selling copies around the world. It has been frequently touted as the most successful contemporary Indian board game, the biggest of its kind since Chess. SHASN has sold over 6000 copies and has player bases in over 60 countries.

In SHASN, players take on the role of politicians as they answer tough policy questions, manage resources, influence voters, and outmaneuver each other to secure power. SHASN was designed by Zain Memon, now recognised as the leading authority in game design out of India.

“SHASN managed to introduce a lot of players to the exciting world of modern tabletop games. Our vision is to keep expanding the market by creating fun, engaging games across genres and ages, and remind the country of its rich tabletop legacy,” quotes Zain Memon. 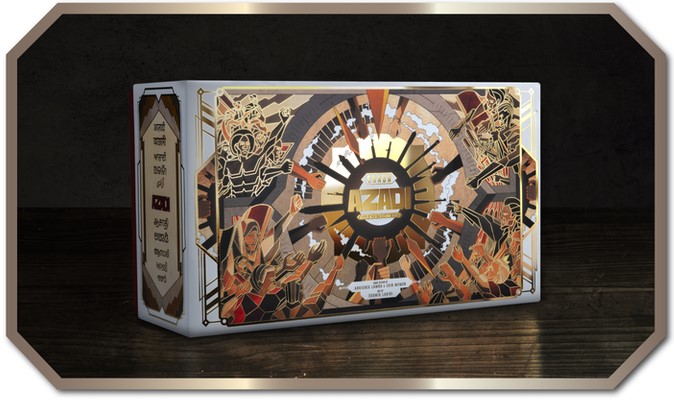 AZADI takes the political experience of its predecessor one step forward by plunging players into the shoes of revolutionaries attempting to overthrow a tyrannical Imperial power. The semi-cooperative board game is an effort to reclaim and rewrite history through the lens of the oppressed. With campaigns spanning across South Asia, USA, Egypt, and Russia, AZADI gives players the opportunity to dive into freedom struggles through the ages.

Joining Zain Memon on the AZADI designer’s table is Abhishek Lamba – a core member of the SHASN team, and an emerging figure in the board game industry. Memesys Studios, run by Anand Gandhi and Zain Memon, has also produced critically acclaimed cinema like Ship of Theseus, An Insignificant Man, and OK Computer (Disney+Hotstar).

“As a studio, we’re always on the lookout for the most important, exciting stories of our times. AZADI is one such story – a reminder of how every inch of our freedom has to be fought for in the face of oppression – a story that needs to be lived first-hand, in a way no other medium can achieve,” shares Anand Gandhi, producer.

Stay tuned to Gaming Trend for more info on SHASN: AZADI and for all your gaming news!