Welcome to Steelport, the new city of Sin.

Just so we are clear and up front, my preview is going to contain some unsavory language.  You’ve been warned.  You couldn’t walk five feet at E3 without seeing the Third Street Saints, as well as their new foes in the upcoming Saints Row: The Third.  Having crushed their rivals in Saints 2, the Saints have a complete and total lock on the city of Stilwater.  In their hubris, the Saints decide to hit a bank. Shaundi, Johnny Gat, the player and a complete and total jerk named Josh Burke (why do they always have my last name?!) meet up to VERY casually pop the vault and take the cash.  When I say casually, I mean that they are all wearing giant Johnny Gat bobble head masks and sporting purple clothes – they’ve done little to hide their identities.

As they start securing the lobby, Johnny stops to take a picture with a starstruck fan.  Unfortunately our rude newcomer pisses off a teller and before they know it the situation is out of hand – turns out this bank is owned by a group called The Syndicate, and the bank tellers are packing heat.  The international crime group, lead by a shady character named Philippe Loren, has several banks under their thumb.  The Saints grab some human shields, take cover, and start flat-out start executing people.

Taking out the bank staff, the crew blasts the last guy in the balls.  As the teller holds his crotch and slumps to the ground, Josh kicks the door and falls backwards.  The player kicks open the door and begins to work their way back towards the vault.  The bank tellers may be dead but this bank is not undefended, as evidenced by several suit-wearing street soldiers and women in corsets which begin filing into the lobby, sealing our fate as well as our exit strategy.  Did I mention that the Saints have a lock on this town?  The front door isn’t their style.

After stopping to sign an autograph mid-robbery (Josh offers his, but gets an “uh…no..”), the crew finally reaches the vault.  They aren’t able to breach the door, so they begin to set explosives in the floor just above the vault.  Josh, true to form, screws up and hits the silent alarm thinking it would open the vault. As a Sky-Lifter helicopter swoops in and latches her pintle hooks onto the vault, the SWAT teams show up. Since the Syndicate soldiers and the SWAT officers are packing serious military hardware, it signals a good time for the Saints to retreat – the gunship helicopters outside might have something to say about that though.

Naturally our Sky-Lifter is having trouble lifting the vault, and the constant harrasment from SWAT (other than the guy yelling “Turn yourself in, my son wants to meet Shaundi!!”), the Syndicate, and the circling gunships is making things just that much harder.  The other Saints make a run for it, but our player is committed to the crime – standing astride the vault he whips out a rocket launcher and begins taking out choppers.  Unfortunately the choppers are winning, breaking three of the four attached cables.  As the final one is about to snap, our player takes out the SWAT chopper, but it’s uncontrolled decent causes the Sky-Lifter to crash as well.  Leaping to safety, the smoke clears and the player finds himself completely surrounded by SWAT officers.  So ends our demo.

I’m purposely describing the demonstration backwards as we started off with the open-ended world demonstration and I wanted to focus on story first, since that is what Volition is doing this time around.  In the two previous titles you could tackle the three distinct zones controlled by the three gangs and their stories would remain entirely separate.  In Saints Row: The Third, the missions can now be completed in different ways, and the decisions made along the way will alter the faction rating with the other gangs.  This will determine which missions become available and when, hopefully resulting in a more coherent and integrated storyline.  That said…bring out the giant dildos!

Saints Row has always given you the option to wear whatever ridiculous outfit you can imagine.  Nothing changes the tone of the ‘very special moment’ in the game more than doing it while dressed as a giant chicken or wearing a gimp mask.  Well, Saints Row: The Third looks to give you even more player choice this time around, giving you pirate suits, ninja outfits, furry mascot suits, or even the option to play naked!  The game is crazy, and being in complete control of the city has only made it more crazy. Admittedly, I can recall having way more fun with the Saints titles than I have with the past few iterations of the Grand Theft series because of this over the top approach.  The first half of the demo was entirely about showing what celebrity has done to the crew.

Before we even get a description of what is going on, our player walks up to a woman, partially kneels, and punches her squarely in the crotch.  As her knees splay out and her eyes go wide, we jump up and knock her flat with a right hook to the jaw.  Leaping past another character, we cup the back of his head and slam his face into the concrete, landing on our elbow in a GQ-model pose that just says “Yea, I’m the baddest motherfucker on this block.  Take pictures.”  Popping up, we break out a shotgun and slam it across the knees of the next civilian we come across.  Hitting another guy with a clothesline strike, blasting another guy with an elbow, and all the while looking awesome doing it is just the tip of the iceburg.  Pulling out a four-foot-long floppy dildo (it’s purple – Saints style!) and stepping up on the nearest homeless guy we begin to club him like a baby seal.

Giant floppy cock not enough for you?  Fine – out comes the Apocafist.  The Apocafist is a novelty-sized giant fist that, when applied in a forceful manner, makes the intended target explode in a spray of blood and guts.  What, still not enough?  You guys are brutal!  Out comes the Coup de grâce – aerial bombardment.  Using a laser to designate our target, we call in an airstrike on a bunch of Luchadores (one of the three gangs in the game) just standing by their cars.  The resulting blast is large enough to level half a city block…and what a block it is.  The level of detail in Stilwater is amazing.  The buildings look like they are delapidated and run down.  The character models are higher polygon count than ever before and the interaction looks like it has gotten a bump as well.  Stepping over to an obvious hooker we start dancing up a storm, doing the ‘ride the pony’ move.

It was now time to check out some new vehicles and a new set of activities in the game.  Picking up a portion called “Tank Mayhem” we jump in an armored behemoth with one objective – to cause as much monetary damage as possible in the allotted time.  The activities, as before, earn you money and respect, but now your tank will flatten vehicles – important when the Army starts bringing in Humvees and helicopters.  It isn’t just tanks though – the vehicle system has gotten a complete overhaul.  You can now powerslide, power stop, flip a 180-degree turn and drive in reverse during a firefight, and much more.  Since vehicles are a big part of the game, this is a blessing.  Even the way you get into a vehicle has been improved – you could open the door, but diving in the window like a badass is so much more fun.  Since you are a celebrity, simply squealing the tires will make crowds gather and cheer for you – Hell, they’ll cheer even louder when you run over their friends.

The cars aren’t the only thing new under the sun – our demo gave us a look at the Johnny Gat Mobile, Professor Ginky’s “Manapult”, and a VTOL Jet!  The Gat Mobile looks like a longer truck with a giant Johnny Gat head as the cabin.  The cigarrette hanging out of his mouth doubles as a flamethrower.  Professor Ginky’s Manapult looks like a giant, freakish, cat-faced truck with a big cannon on top.  You can suck in civilians and then use them as ammunition for the odd vehicle.  Since the game can be played cooperatively, the second player can be sucked into the manapult and shot out as a form of ‘transportation’ – unlike the civilians, thankfully you have a parachute. The VTOL jet is a STAG (Special Tactical Anti-Gang – a government agency committed to crushing all gangs, not just the Saints) toy.  It has lasers, homing missiles, and explosives you can lob onto the ground below.  The jet can also toggle between hover and jet modes for maximum versatility.

The only thing this demo did for me was make me want to play the game more. Saints Row: The Third looks badass! It’s gonna be a long wait till November 15th, 2011. 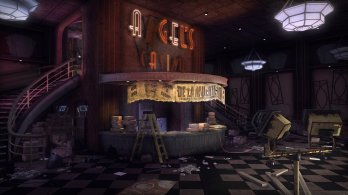 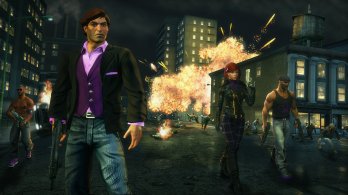 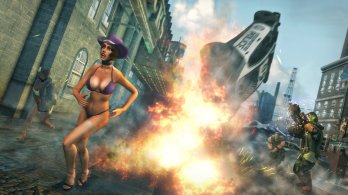 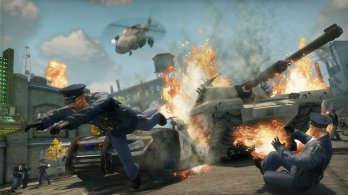 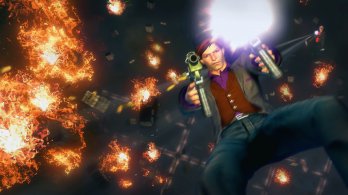 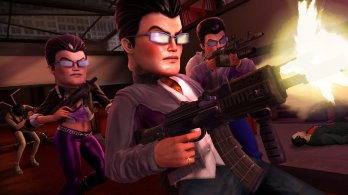 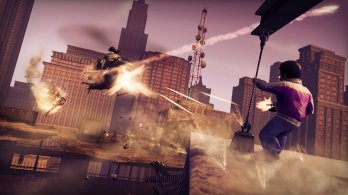 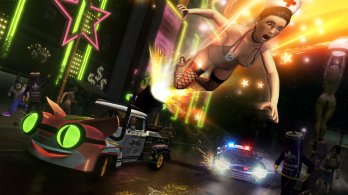 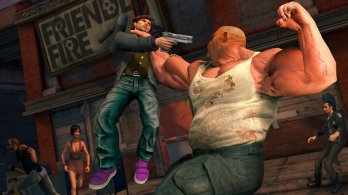 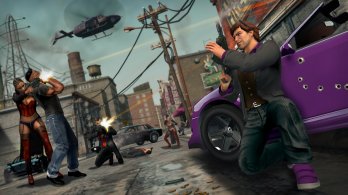 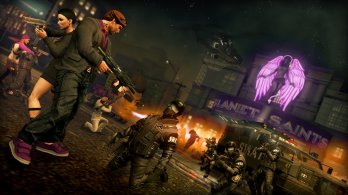 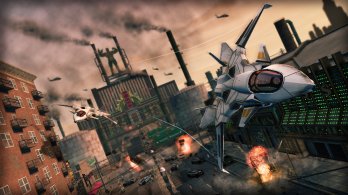 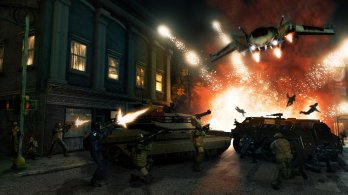