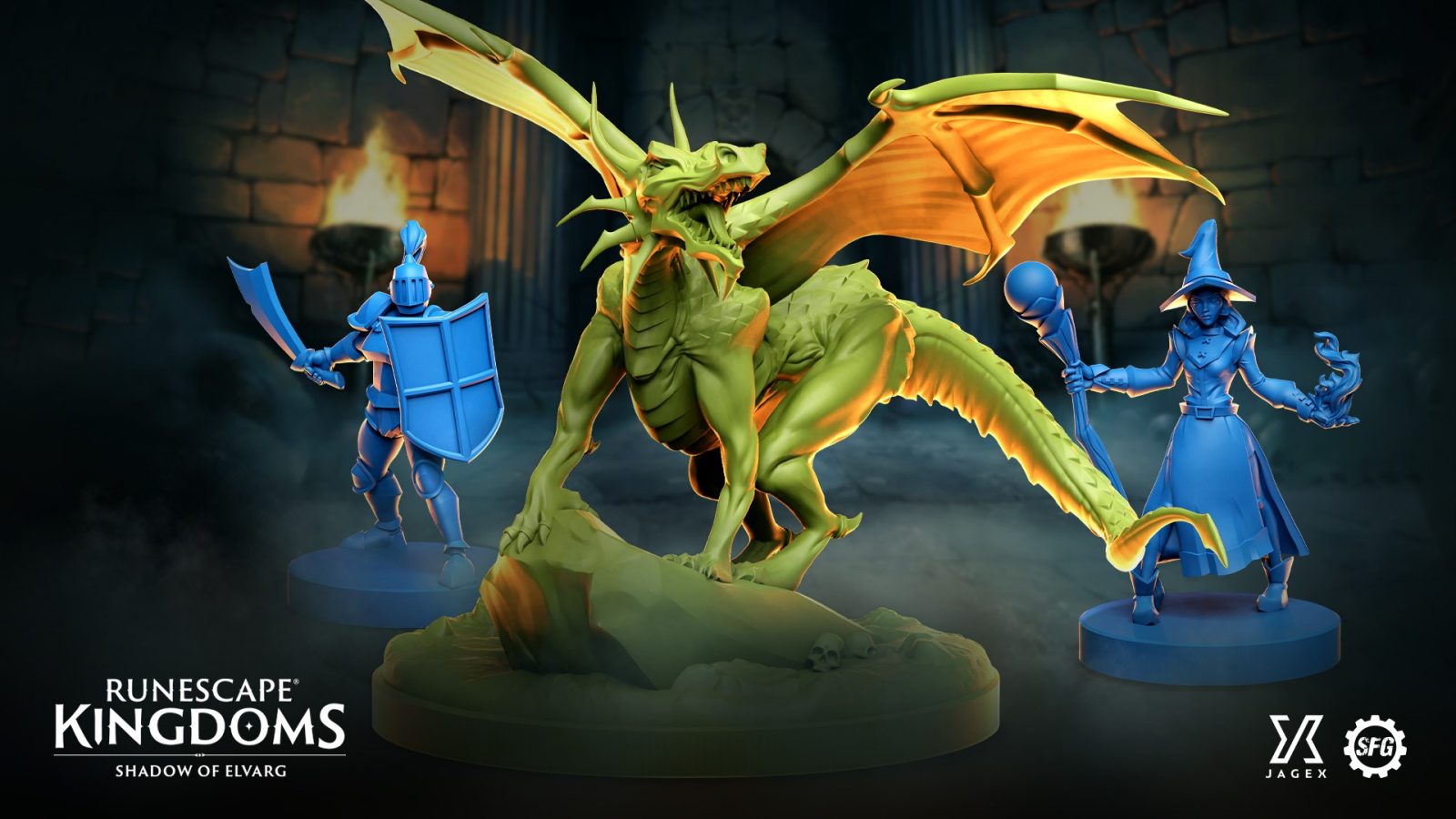 RuneScape Kingdoms: Shadow of Elvarg is a cooperative campaign board game for one to five players set in RuneScape’s fantasy world of Gielinor. Driven by narrative and immersion rather than complex strategy, this tabletop adventure is designed to give those who love the franchise a new way to play and provide a way into the irreverent and exciting world of RuneScape for those unfamiliar with the MMORPG.

Explore the kingdoms of Asgarnia and Misthalin from above with a game board styled like a fast-travel map, jumping from region to region as you level up your skills and complete quests. Zoom in for face-to-face encounters with iconic bosses, that become even tougher as you work your way toward the final quest!

Steamforged — the company creating, Kickstarting, and publishing RuneScape Kingdoms: Shadow of Elvarg — today shared this description of the game:

RuneScape Kingdoms: Shadow of Elvarg distills the classic, fun, high-fantasy adventures of the beloved living game into a tabletop experience. Gather your group and immerse yourself in the sometimes epic, often irreverent world of Gielinor. Whether you’re slaying mighty monsters, crafting awesome gear, or gathering eggs to bake that game-changing cake, RuneScape Kingdoms: Shadow of Elvarg lets you live your fantasy, your way.

You choose what skills to max, which weapons to craft, and even where to explore next. Meander through Gielinor, sampling every side quest on the way, or keep your eyes on the prize and cut a straight path through the campaigns to take on challenging boss fights. With a classless progression system, every group member can play their way, maxing skills to level up and earn those all-important capes.

Whatever kind of ‘Scaper you choose to be, you’ll play an important role in the success of your group      — because you never know when the fate of Gielinor will depend on baking the right pie.

“It’s incredibly important to us for the board game to appeal to RuneScape fans of all kinds. For that reason, the board game is heavily inspired by content and references from both RuneScape and Old School RuneScape, that’ll be familiar to all players past and present.

We also created the board game as a way for brand new fans to enjoy the rich world of Gielinor, even if they’ve never experienced the video games. Board gamers should expect a classic and fun fantasy game that features rich narrative quests, light-hearted distractions, sandbox exploration at the macro level, face-to-face boss encounters, and classless character progression.

Because we’re taking content from both Old School RuneScape and RuneScape, translating video game mechanics to the tabletop, and even adding some new quests into the mix, it seemed fitting to create a name that would embody what the board game is: A new way to explore the established world of Gielinor. And so, RuneScape Kingdoms was born.”

Steamforged and Jagex also today confirmed the board game will include the first ever official RuneScape models in the form of tabletop gaming miniatures.

Sculpted by the Steamforged team, the miniatures will depict iconic outfits, NPC’s, and bosses from across the IP developed in a uniquely “RuneScape” style for the tabletop. The first three miniatures revealed today are player avatars including a Knight in platebody armour, a Wizard sporting the Staff of Air, and Elvarg, the titular green dragon from the popular Dragon Slayer quest.

“We’ve worked closely with Jagex to develop a new visual style that, like the board game, is heavily inspired by and draws from both RuneScape and Old School RuneScape.” Mat continues, “These miniatures give the first taste of that new style, and we look forward to revealing more in the coming weeks.”

“RuneScape coming to life on the tabletop is a brand-new adventure for all of us here at Jagex. We are always looking for new ways for our players to experience the things they love about the lands of Gielinor as well as the rush they first felt when starting out in RuneScape. For years our community has also looked forward to collectibles of all their favourite characters. This board game is an important milestone for us, and we can’t wait to share more of what Steamforged have been developing for RuneScape Kingdoms: Shadow of Elvarg and get this tabletop adventure in players’ hands.”

Steamforged will launch RuneScape Kingdoms: Shadow of Elvarg on Kickstarter later this year. To be notified when the campaign launches, follow the Kickstarter here.

To get involved and receive the latest updates on the upcoming RuneScape board and tabletop roleplaying games, join the dedicated mailing list here.