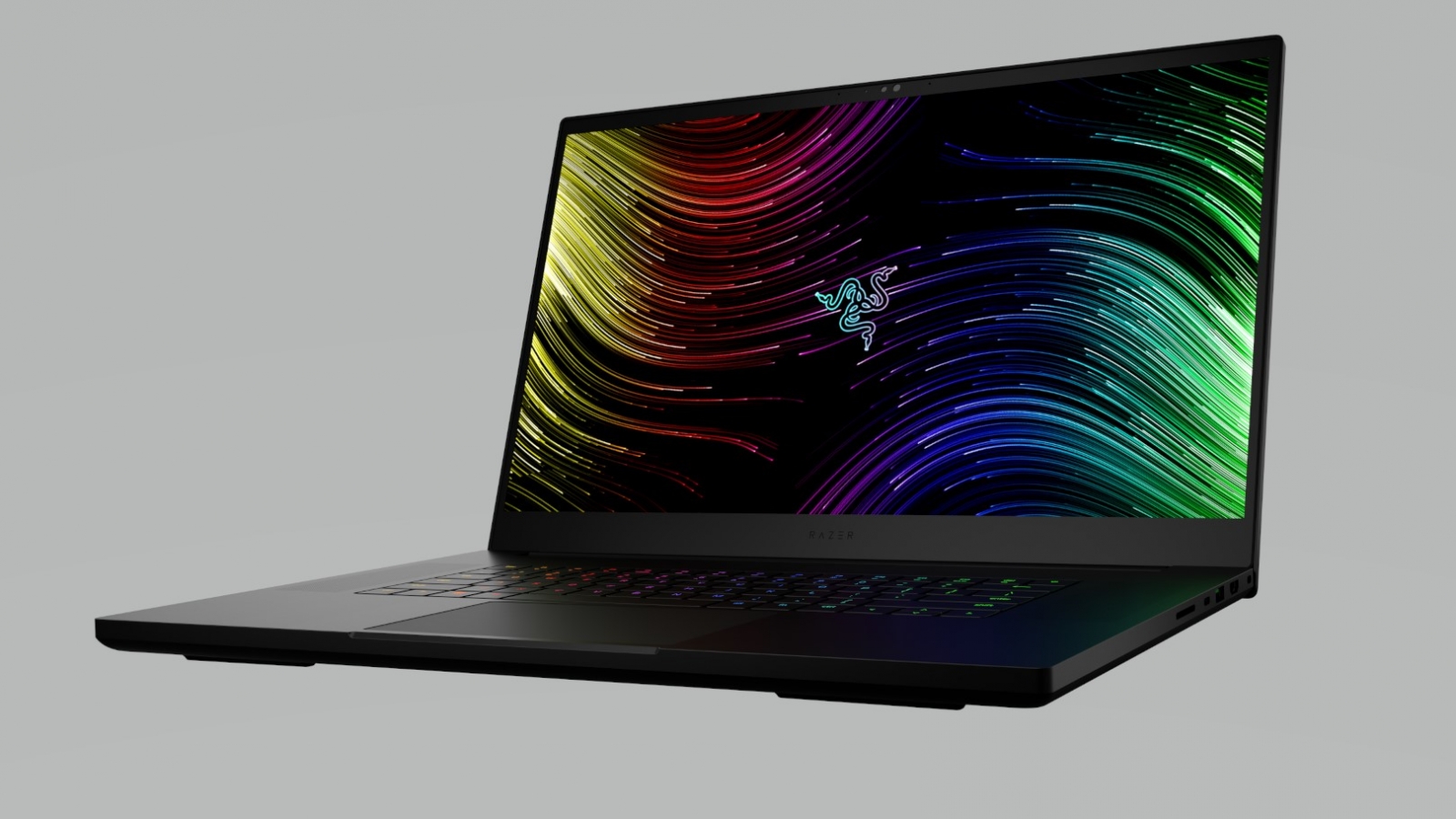 Razer just announced a new line of Razer Blade Gaming Laptops at CES 2022 including the Razer Blade 14, 15, and 17. These laptops will ship with Windows 11 installed and feature: Efficient next-gen processors: AMD️ Ryzen™️ 6000 Series or newest ️12th Gen Intel Core™️ H-Series Processors, up to an Intel Core™️ i9-12900H with a new 14-core count over the previous 8-core generation – depending on model; Groundbreaking and faster DDR5 memory; providing blistering clock speeds up to 4800MHz (50% increase in frequency vs previous-gen) and more powerful graphics cards: NVIDIA® GeForce RTX™ 30 Series Laptop GPUs, up to an RTX 3080 Ti. You can read below for full details on each model:

LAS VEGAS (CES 2022) – Razer™, the leading global lifestyle brand for gamers (Hong Kong Stock Code: 1337), is kicking off 2022 with new Razer Blade gaming laptop models including the Razer Blade 14, Razer Blade 15, and Razer Blade 17. The world’s fastest laptops for gamers and creators are equipped with the recently announced NVIDIA® GeForce RTX™ 30 Series Laptop GPUs, up to an RTX 3080 Ti, making the new Blades better than ever, now shipping with Windows 11.  All new Razer Blade gaming laptops now also include groundbreaking DDR5 memory, providing blistering clock speeds up to 4800MHz, an increase in frequency by up to 50% compared to the previous generation.

“The Razer Blade series continues to be the best gaming laptop by providing desktop-class performance on-the-go,” says Travis Furst, Senior Director of Razer’s Systems business unit. “Additionally, we’ve enabled creators to work anywhere with gorgeous displays, available NVIDIA Studio drivers, and up to 14-Core CPUs. Users will have the ability to choose any model or configuration that best fits their gaming or creating needs, while getting the latest and greatest in graphics, memory and processing technology.”

NVIDIA GeForce RTX laptops are based on the revolutionary Ampere architecture, with 2nd generation RT Cores for ray tracing and 3rd generation Tensor Cores for DLSS and AI. The new GeForce RTX 3080 Ti Laptop GPU brings the flagship 80 Ti class of GPUs to laptops for the first time. Featuring 16GB of the fastest GDDR6 memory ever shipped in a laptop, the RTX 3080 Ti delivers higher performance than the desktop TITAN RTX. The new GeForce RTX 3070 Ti is up to 70% faster than RTX 2070 SUPER laptops and can deliver 100 frames per second at 1440p resolution.

The Razer Blade 14, 15, and 17 are powered by cutting-edge advancements from both AMD®️ and Intel®️. The Blade 14 returns with the next generation of AMD️ Ryzen™️ 6000 Series processors. Every configuration offers the ultra-fast Ryzen™️ 9 6900HX processor, enabling some of the most powerful AMD gaming possible on a mobile device.

Both the Blade 15 and Blade 17 come equipped with the newest ️ 12th Gen Intel Core™️ H-Series Processors, up to an Intel Core™️ i9-12900H with a new 14-core count over the previous 8-core generation. Intel’s 12th Gen processors bring a revolutionary new design with a performance hybrid architecture that combines performance-cores with efficient-cores, offering users the freedom to chat, browse, stream, edit, record, and play. The newest generation of Intel Core i9 processors will see high-speed frequencies up to 5.0GHz.

Each Razer Blade is uniquely imagined with exemplary CNC-milled aluminum chassis and high-quality custom components, resulting in a gaming laptop unlike any other on the market. Designed with the gamer’s wellness in mind, the new Blades sport a refreshed keyboard design, with slightly larger keys, making the typing experience more ergonomic than ever before. The revised design also includes laser-cut speakers, a refined hinge design with a thinner profile and additional ventilation with well-designed rubber feet to create convenient cooling airways. 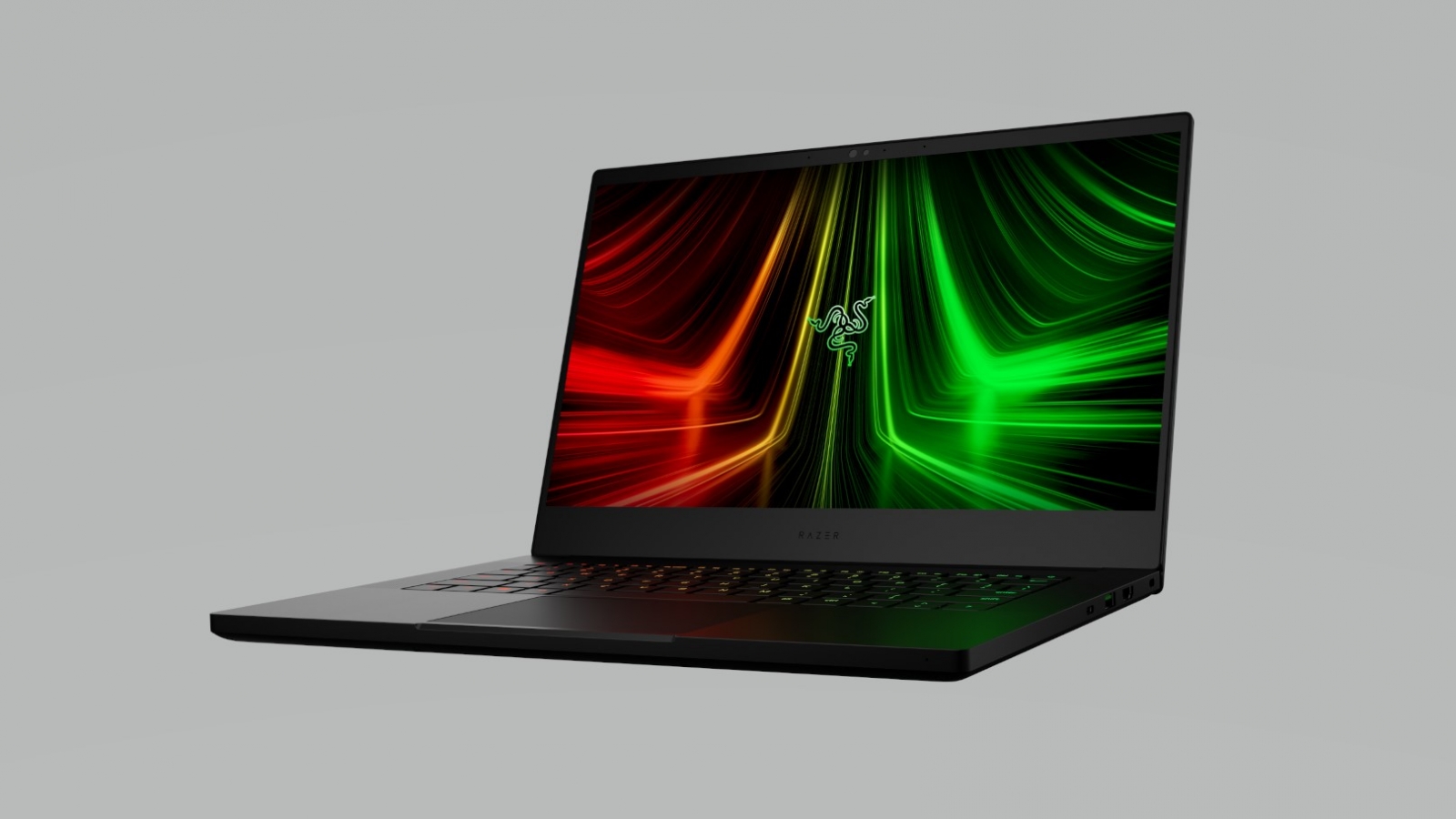 The most powerful 14-inch gaming laptop of 2021 is back and more powerful than ever before. The new Razer Blade 14 combines the latest AMD️ Ryzen™️ 9 processor with an improved 16GB of DDR5 memory to create a blazing-fast gaming device that surpasses the previous generation.

The Blade 14 continues to be a remarkably thin, light, and compact device with impeccable performance, now packed with further refinements to make a great gaming laptop that much better. With a newly implemented MUX Switch, the Blade 14 sees increases in gameplay performance by utilizing the discrete GPU to drive games on the internal display. The Razer Blade 14 now also joins its slightly larger family members with the addition of the same fingerprint resistant coating and a 1080p IR webcam that supports Windows Hello, making video calls twice as clear as before. 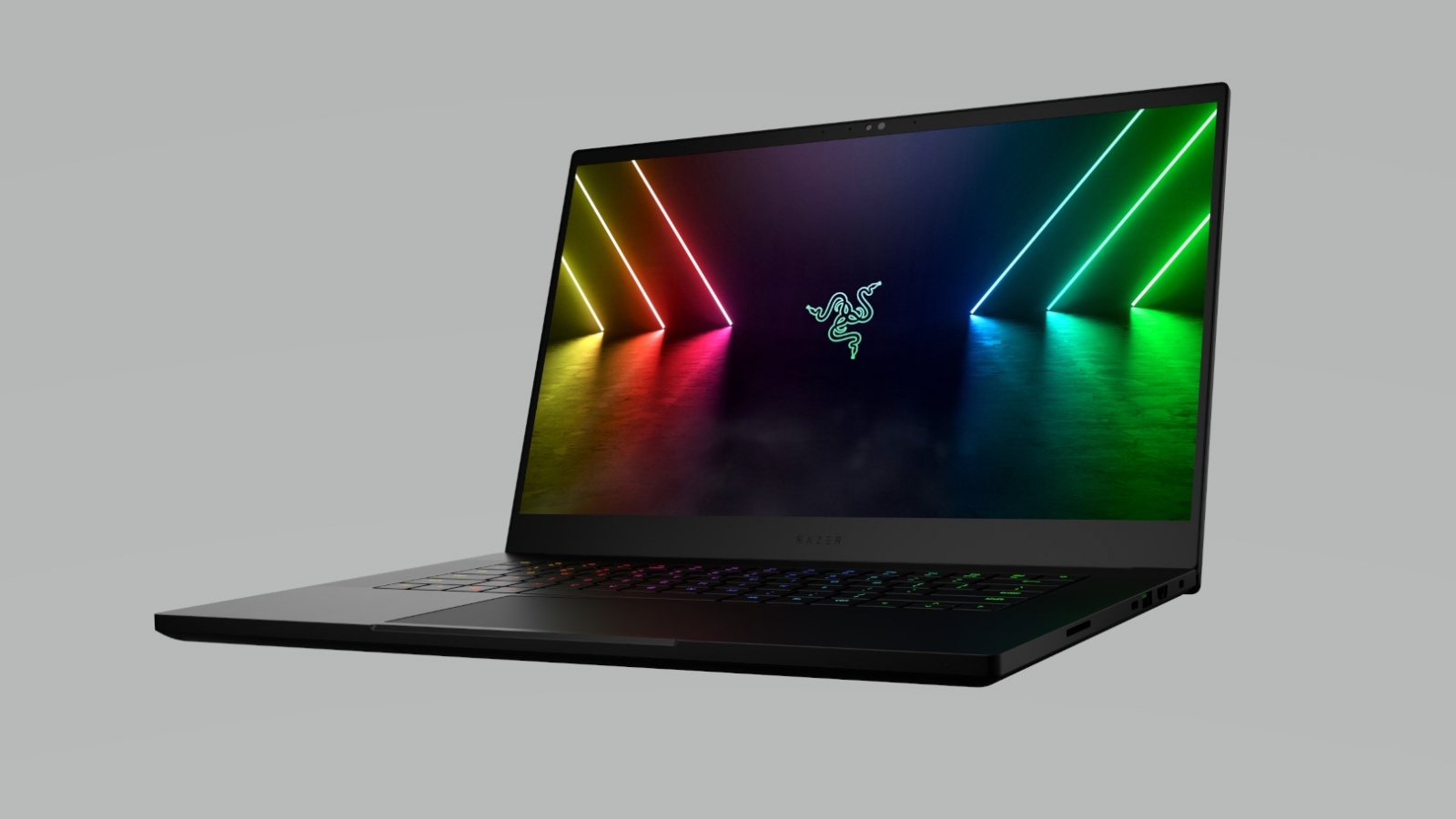 Beyond offering the latest chipsets from both NVIDIA GeForce and Intel, the Razer Blade 15 returns with cutting edge displays to make the most of the latest hardware. The Blade 15 will continue to offer the best of the best in display technology, including Full HD 360Hz and QHD 240Hz configurations, as well as an all-new UHD 144Hz configuration. The new IPS-Grade display features improved refresh rates, up from the 60Hz of previous generations, while simultaneously covering 100% of the DCI-P3 color gamut, to provide superb clarity and contrast when gaming or creating. Featuring the most powerful processors, boundary pushing displays, and blazing-fast memory all fitted into a finely tuned premium chassis, the Razer Blade 15 remains the perfect gaming laptop.

Professional creators and gamers hunting for the ultimate desktop replacement need to look no further, as the new Razer Blade 17 comes with specifically chosen advancements in both audio and power delivery. The Razer Blade 17 doubles down on music and gameplay, boasting eight total speakers, up from the previous four, meaning creators can pick up minute details in audio mixing even without dedicated speakers or headsets. Backed by the NVIDIA Studio platform, creators also get RTX acceleration in 70+ of the most popular creative applications and a suite of exclusive apps: NVIDIA Omniverse, Broadcast and Canvas. Enjoy more hours of gameplay than ever before when unplugged or on the go with the larger 82WHr internal battery, over 10WHrs larger than previous generations. And when bringing the Blade 17 on to go, traveling is easier than ever as it now ships with a newly designed GaN-powered 280W charger, giving users access to even more power in a size comparable to the average 180W power brick.

The new iterations of the Razer Blade 14, 15, and 17 ship with Windows®️ 11 pre-installed, with all its prevalent gaming benefits including DirectStorage, Xbox GameBar and Xbox Game Pass. The sides of each Razer Blade are lined with a variety of inputs, depending on the chassis, ranging from USB-C to HDMI 2.1 to a high-speed UHS-II SD card reader, so users can connect to anything, without hunting for a dongle.

The keyboards of all three Razer Blades are powered by Razer Chroma RGB that can be customized for productivity or gaming with front-facing speakers to keep work and play fun and engaging. All three of the new Razer Blades continue to provide immersive audio for a 360-degree soundscape when listening to movies, music, or games with THX® certified THX Spatial Audio over any analog headphones or the device speakers.

Additionally, the new generation of Razer Blades will begin a new extended battery warranty of up to 2 years, to help ensure users that their Blades are taken care of every step of the way by helpful Razer service and support.

To learn more about the all-new Razer Blades, go to razer.com/gaming-laptops

The new Razer Blade 14 starts at $1,999.99/2,199.99€ MSRP on Razer.com and will be available for pre-order at Razer.com, Razer Store locations and select retailers on February 10th and for purchase from select retailers in Q1 2022.