Today during their CES 2022 presentation, NVIDIA released a ton of news including GeForce details, and a detailed special announcement video, which you can view above. You can read below for more information:

Gamers and creators have made GeForce high-performance laptops the fastest growing category in PCs, and today, we are announcing over 160 new laptops, all built around our RTX 30 Series Laptop GPUs. These new laptops are built in a variety of form factors, from dual-screen, easel, and convertible, to portable powerhouses with G-SYNC and 1440p displays.

Whether you’re a creator or gamer, the latest 4th generation of Max-Q Technologies – including CPU Optimizer, Rapid Core Scaling, and Battery Boost 2.0 – continue our commitment to bring you great performance in thin designs. Now creators can experience up to a 3X performance improvement on their favorite apps while creating on the go, and gamers will also enjoy performance increases and up to 70% more battery life.

For creators looking for the ultimate laptop for your work, we are also announcing new NVIDIA Studio laptops. Featuring the latest RTX 3080 Ti GPUs, these laptops are on average 7 times faster than the latest MacBook Pro 16 M1 Max in 3D renderers. With hardware-accelerated ray tracing, AI, and NVIDIA’s high performance video processor, these laptops are the perfect tool for any creator workflow. There is a wide variety of designs to meet every creator’s needs, including ultra-portable 14” laptops like the new Razer Blade 14, the dual display flexibility of the Asus Zenbook Pro Duo, or powerful creator laptops like the RTX 3080 Ti powered MSI Creator Z17.

Learn more about all of these new laptop announcements in our detailed laptop article here. 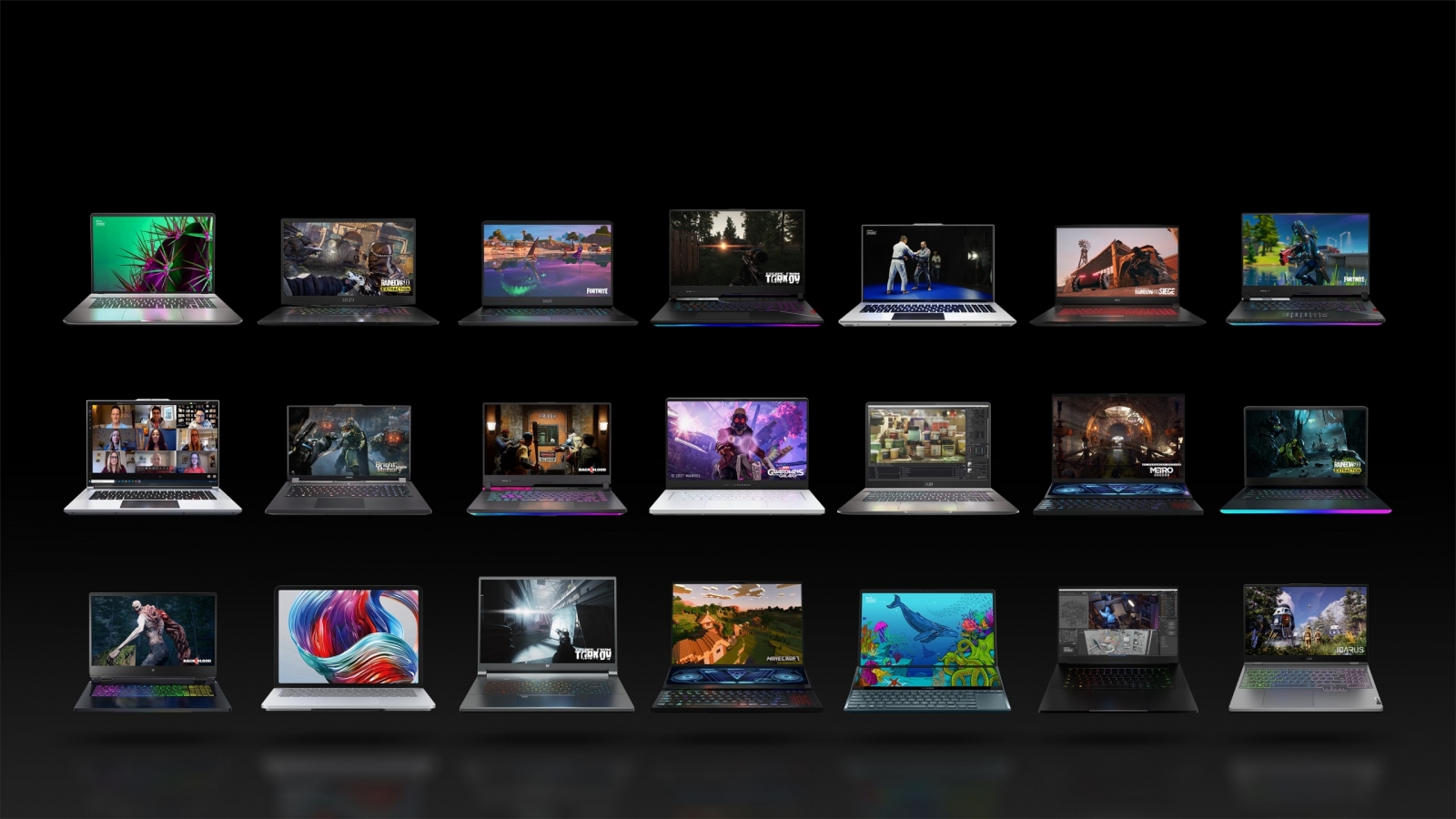 Today, we revealed the GeForce RTX 3050, bringing the performance and efficiency of the NVIDIA Ampere architecture to more gamers than ever before. RTX 3050 graphics cards come equipped with 2nd generation RT Cores for ray tracing, 3rd gen Tensor Cores for DLSS and AI, and 8GB of GDDR6. For the first time, you can play ray traced games on a 50-class GPU at over 60 frames per second. It starts at just $249, and is coming worldwide from all of our partners on January 27th.

Check out all of the details for the GeForce RTX 3050 in our announcement article.

NVIDIA RTX momentum continues to build as ray tracing and AI are defining the next generation of content. Since the last CES, we have added over 150 RTX games and applications, and gamers have logged over 1 billion hours of play time. The top games this past year include Call of Duty: Warzone, Rainbow Six Siege, DOOM Eternal, Back 4 Blood, and Deathloop. We are excited to expand the roster of RTX games this year as well – bringing these technologies to games like The Day Before, Rainbow Six Extraction, Escape from Tarkov, and Dying Light 2 Stay Human.

Learn more about our RTX game announcements in our detailed RTX article.

For competitive gamers, milliseconds are the difference between winning and losing. This is why 8 of the top 10 competitive shooters have integrated NVIDIA Reflex – our low-latency gaming platform. Gamers love it, and over 20 million GeForce players compete each month with Reflex.

While Reflex is critical for competitive matches, lower latency is important in any game. And the great news is that 7 more games with Reflex are on the way, extending the technology into new genres.

These new Reflex titles include iRacing, the world’s premier online racing simulator; Rainbow Six Extraction, where Reflex has your 6 as you confront Archæans; and Sony’s award-winning God of War, where you can achieve better dodges and combos when it launches on PC on January 14th. The Reflex hardware ecosystem continues to grow alongside games. Our Reflex Latency Analyzer allows players to easily measure system latency with a single click of the mouse. We now have over 50 Reflex mice and monitors from 16 partners including 6 new Reflex mice from Alienware, AGON, CORSAIR, EVGA, and Logitech, as well as 5 new Reflex monitors.

Learn more about these announcements in our Reflex article.

With the global growth in esports, the demand for esports-optimized displays has been doubling each year, and we believe the time is right to take it to a new level. Today, we are announcing a new category of esports displays: 1440p resolution, 27” form factor, operating at up to 360Hz with new Esports Vibrance and Reflex Latency Analyzer features.

Even more new G-SYNC Compatible, G-SYNC, and G-SYNC ULTIMATE displays have been announced by our partners including Alienware, ASUS, LG, and more at CES 2022.

More details about 1440p esports displays, new frontiers for OLED and mini-LED, HDR10+ GAMING on GeForce GPUs, and our other new G-SYNC announcements can be found in our G-SYNC round-up article. 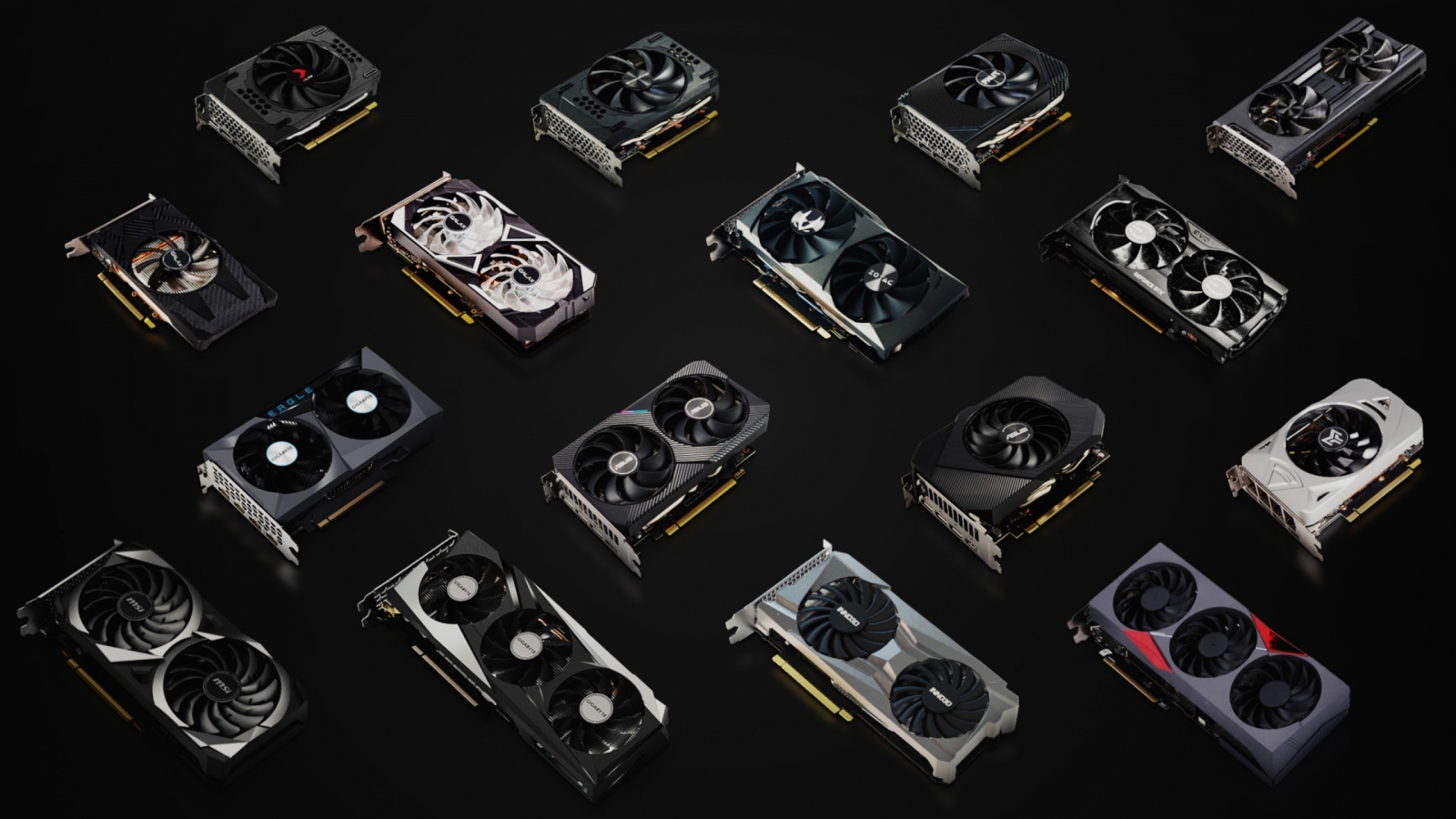 GeForce NOW continues to grow as the leading cloud gaming service for PC gamers, reaching over 15 million members around the globe on various devices, from Macs to under-powered PCs, TVs to smartphones. GeForce NOW supports over 1,100 PC games from the leading PC game stores and we’re excited to announce that EA’s Battlefield 4 and Battlefield V are available on GeForce NOW starting today.

We’ve also been working with the world’s largest TV manufacturers to bring GeForce NOW to millions of living rooms. Last month, we launched a beta version of GeForce NOW on LG 2021 Web Os Smart TVs, and today, we’re pleased to announce a partnership with Samsung to integrate GeForce NOW. Starting in Q2, Samsung Smart TVs will be streaming PC-class gaming with GeForce NOW.

The rapid expansion of 5G networks offers the potential for low-latency cloud gaming everywhere, so we’ve teamed up with AT&T and their fast, reliable 5G network to bring the power of PC gaming to mobile devices. Starting in January, AT&T customers with a 5G device on a 5G unlimited plan – or qualifying unlimited plan – can get access to GeForce NOW Priority for six months at no charge.

For more details on GeForce NOW, these announcements, and our exclusive promotion, check out our blog here.

We are at the dawn of the next digital frontier. Interconnected 3D virtual worlds – whether for commerce, entertainment, creativity, or industry – are being built today. And these worlds will be built by an expanding number of professional and amateur creators, collaborating from across the globe. For this future, we’ve built NVIDIA Studio – a fully accelerated platform for creators.

Today, we are excited to announce that NVIDIA Studio is expanding with the production release of Omniverse – a virtual collaboration and real-time simulation platform launching for 3D creators. Omniverse brings over 20 years of NVIDIA’s groundbreaking work in graphics, AI, simulation, and compute into a single platform to transform and overcome the challenges of complex 3D workflows.

In addition to 3D-centric applications, NVIDIA Studio includes the Canvas app, which instantly converts digital brushstrokes into photorealistic images. Today, we have a major update to announce for Canvas’ AI. Built from NVIDIA’s GauGAN2 research, the latest app produces images that are 4x higher resolution, with more detailed elements.

Check out more details from our NVIDIA Studio announcements here.

NVIDIA today set out the next direction of the ultimate platform for gamers and creators, unveiling more than 160 gaming and studio GeForce-based laptop designs, as well as new desktop and laptop GeForce RTX GPUs and technologies. We also announced new RTX-accelerated content, and the expansion of both GeForce NOW cloud gaming and the NVIDIA Studio ecosystem, including the launch of NVIDIA Omniverse for creators. And much more.

Follow along for the rest of the year for all the latest announcements about our platform. Bookmark GeForce.com and follow us on social media.