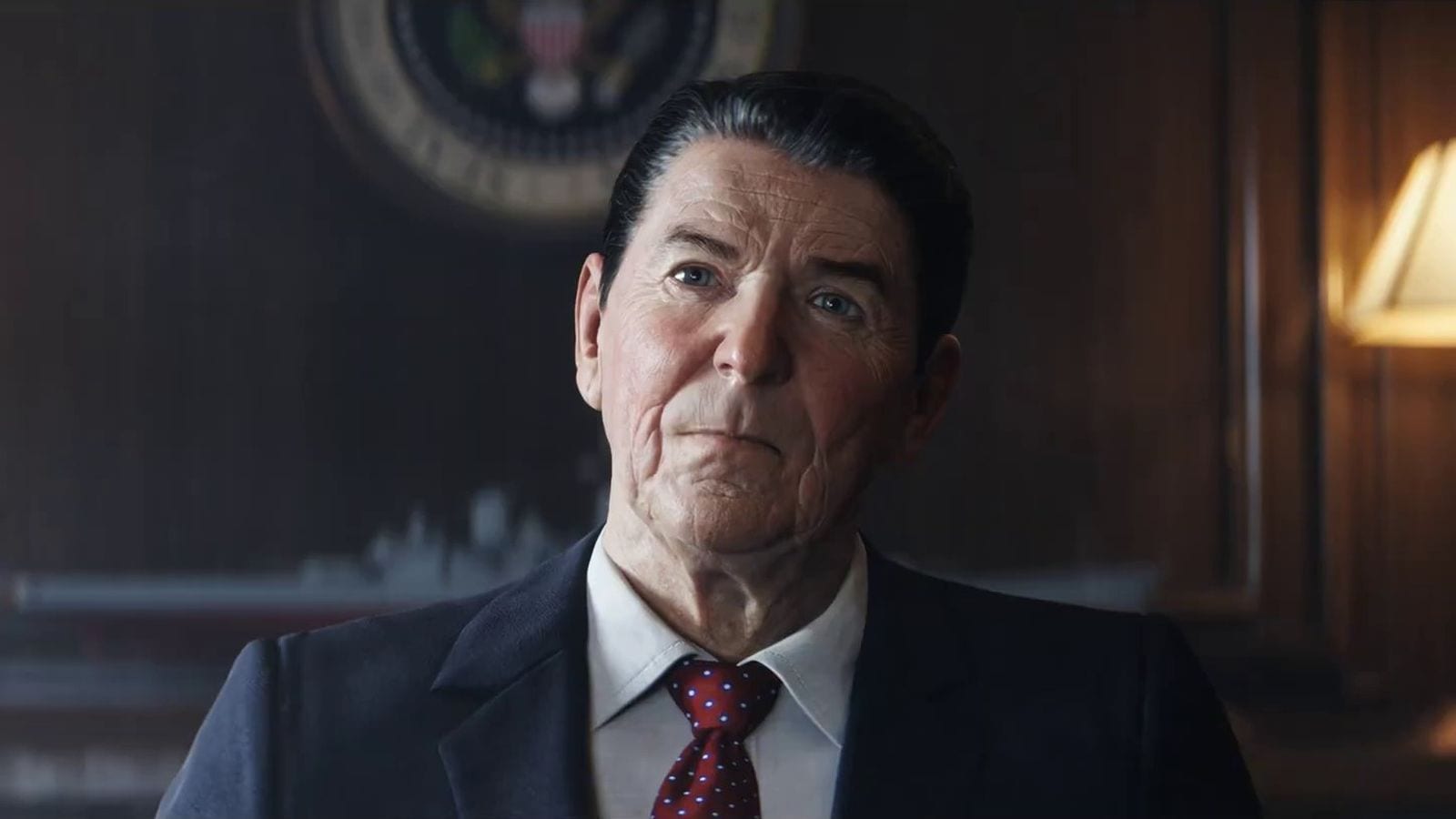 There’s no doubt that Call of Duty: Black Ops Cold War looks fantastic on PlayStation 5 — we captured the first few missions as part of our review. The PlayStation 5 sports some fantastic bells and whistles, but there’s nothing quite like the power of a well-equipped PC to really showcase the true potential of a game with the latest bleeding-edge tech. I’m a sucker for this sort of thing, so let’s fire it up and take a look under the hood.

The teams at Treyarch, Raven, and Beenox have teamed up with NVIDIA to bring a whole host of technology to bear with this latest installment of the Black Ops series including RTX, DLSS, Ansel, and Reflex. We’ve got a GeForce RTX 3080 Founder’s Edition in house, so I took it for a spin and annotated some of the improvements I spotted right out of the gate:

The first thing you’ll notice is just how fantastic the ray tracing is on PC. Shadows are softer and more accurate. With ray tracing turned off you see hard shadow edges, and with it enabled it’s more like you’d seen in the real world with blurred, soft, and reactive edges. Beyond realtime lighting, ray traced shadows are some of the most subtle but immersion-raising advances we’ve seen recently. Tree leaves cast individual shadows, and the slat patterns of a fence cast elongated shadows that distort over distance instead of just being straight dark lines coming off of solid objects. In some of the Vietnam-based missions, there are tons of overhead light sources casting shadows through overhead grating, and it simply looks magnificent.

We recently saw on the official NVIDIA blog, four games recently picked up DLSS 2.0 support including Call of Duty: Black Ops Cold War, and oooooh boy is it an improvement! At 4K resolution running a processor two generations old, and with DLSS set to “Performance Mode”, framerates jumped from 59.5 to 118.0 on an RTX 3080. Using the Turing cores of the GPU, the card uses AI to upsample and push framerates. The results are absolutely staggering, especially considering there is only a small image degradation cost to the improvement.

There are four DLSS options to choose from — Quality, Balanced, Performance, and Ultra Performance. These choices allow you to balance framerate and image quality, though when you’ve got this much headroom to play with, DLSS 2.0 in Quality Mode and hitting somewhere in the middle is fine by me. 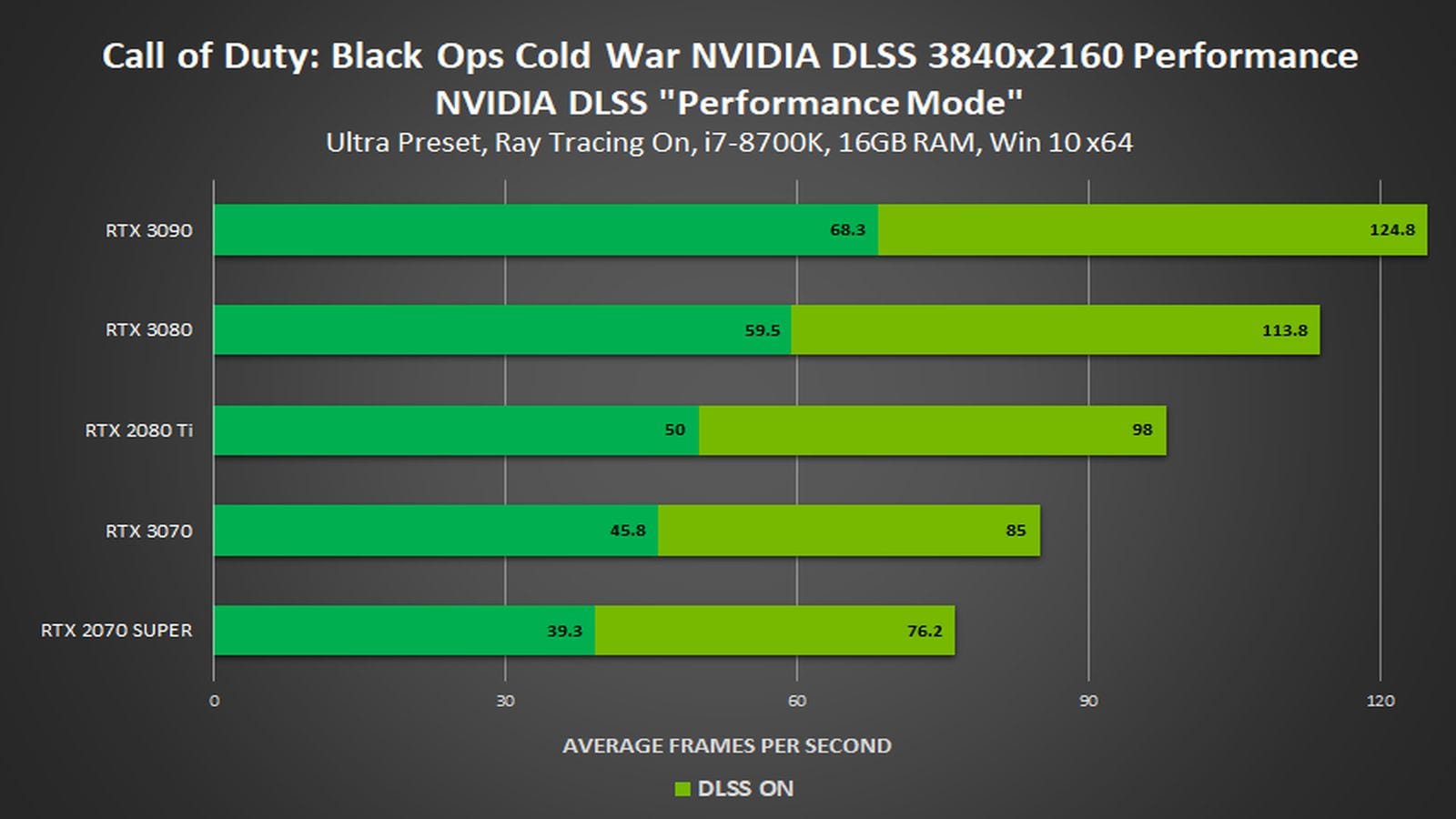 I’m not one to take charts like these at face value — I like to trust but verify. Putting the game through its paces with similar hardware (I’ve got a machine with an 8700K but it has 32GB of RAM and a 3070) I saw scores in the high 70s to low 80s, depending on the scenario. Running the same area with a 10700 with 32 GB of RAM and a 3080 I saw framerates in the high 90s. This confirms that this chart is not slideware, but real-world improvement.

I’m a “frames make games” type, so I’d rather run 1440p with 144fps all day over 4K, but with DLSS 2.0 it really seems like there’s something for any preference here. Besides, as most games struggle to give the GPU enough to do, you might as well put it on the treadmill and make it run at the highest resolution and framerate your hardware will support.

The final bit of tech is likely one that will be almost a bit of a cheat to have in multiplayer — Reflex. NVIDIA Reflex is a bit of tech integrated directly with the game engine to help eliminate any latency that might be introduced with the interplay between the GPU render queue and the CPU pipeline. Team NVIDIA explained in an expansive amount of detail what all goes into latency and how it can impact your gameplay, but in a nutshell, it boils down to this: When the scene is intense enough to cause the CPU to process frames faster than the GPU can render them, it creates “backpressure” and increases latency. This causes competitive gamers to turn their game options to nearly zero as it ensures they’ll get the lowest possible input latency. When developers take advantage of NVIDIA Reflex, the direct integration allows better control of the interplay between the GPU and CPU, allowing the full range of graphical options while maintaining the ultra-sexy fully-featured graphical output possible. No more playing at 720p on low. I can’t say it better than they do, so here we go:

What is NVIDIA Reflex

Supposedly Reflex can deliver upwards of 20% improvement, though that’s hard to measure with the naked eye. I can tell you that there is a remarkable difference between playing on the PS5 versus the PC, even when using a mouse and keyboard on the latter. It’s a palpable difference in responsiveness, and without another explanation I’ll have to give Reflex the nod. Given that NVIDIA is delivering that additional latency reduction with only a 1% hit to the GPU, that seems very worth the tradeoff.

Under the hood, Call of Duty: Black Ops Cold War is a respectable PC port, with the Beenox crew offering up a ton of adjustments to fit it into whatever box you happen to be running. You can adjust view distance, volumetric lights and shadows, texture quality, model quality, and even drop in an optional HD texture pack if you’ve got the gear to run it. What surprised me, however, is how GPU hungry Cold War really is. Even powerful previous generation hardware like my 1080 Ti struggled to maintain a solid 60fps with everything maxed out at 1080p, and the 2080 Ti fell just under the wire at 54 fps at 4K. Put simply, games like this are why you will want a 30X0 series card under your Christmas tree — it’ll use every bit of power in whichever you choose.

In the end, Call of Duty Black Ops Cold War delivers some absolutely gorgeous graphics on any moderately-equipped PC, but with anything less than the top end, you are going to be missing out on a lot of gorgeous little tweaks that take it from good to great.

Call of Duty: Black Ops Cold War is out now on Xbox One, Xbox Series X/S, PlayStation 4, PlayStation 5, and PC — and you can read our full review here.