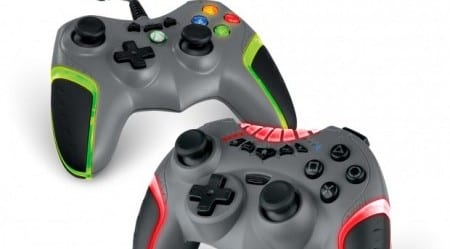 Have you picked up Batman: Arkham Asylum and thought, “Gee, this would have been cool with the original controller Sony showed off when announcing the PS3 since it looked like a Batarang?”  Well, Power A has answered the call with a brand new officially licensed  Batarang controller.  The Xbox 360 version is wired and runs for $50, while the PS3 version is wireless with a Batman themed RF receiver and will cost you $40.  The PS3 version also uses the Xbox 360 positioning for the left analog stick and D-pad for those who prefer that position.  Take a look at the pictures and Press Release after the jump for more details.