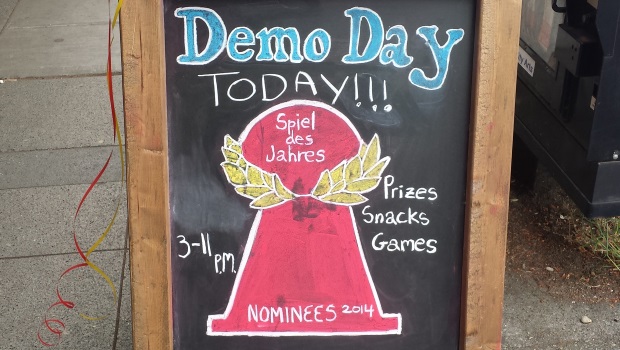 Hobbyist gamers all over the world owe the Germans a great debt. Our Teutonic friends are largely responsible for the thriving board game hobby we enjoy today. Not only do the Germans play more board games per capita than any other nation, they also host award the world’s most prestigious board game honor: the Spiel des Jahres. Since 1979, the German board game industry has awarded the Spiel (“Game of the Year”) to the finest family-friendly games.

Seattle’s Blue Highway Games, nestled in the idyllic Queen Anne neighborhood, hosted “Spiel Demo Day” on June 14. The store’s helpful and friendly staff were on hand to teach customers the nominees for the 2014 Spiel. My lovely companion and I had the opportunity to play all three games.

Steffen Bogen’s CAMEL UP!, published by Pegasus Spiele, isn’t yet available in the US (although Z-Man has picked it up for later this year). Each player is a spectator trying to win the most money by wagering on a camel race. Superficially, it is a roll-and-move race game, but don’t let that fool you into thinking there isn’t anything else to it.

On your turn, you have several options: 1) Play a card face-down to wager on the final results of the race, 2) claim a face-up tile to wager on the interim results (resolved several times during the game), 3) randomly choose a die to roll, which moves one of the camels, or 4) place an obstacle on the track to interfere with the camels.

CAMEL UP! features a couple notable gimmicks. The camel pieces can stack on top of each other. When a camel at the bottom of the stack moves, the camels on top move with it, piggy-back style. Just like they do in the wild!

The other gimmick is less charming. The pyramid at the center of the board holds 5 colored dice, one for each camel. When a player chooses to move a camel, he shakes the pyramid and turns it upside-down to release one of the dice. The same mechanic could be implemented with a pouch to draw the dice from. I found the pyramid unnecessary and distracting.

I enjoyed the game more than I expected to, mainly because there was more depth than it looked like at first glance. Because the movement of the camels is almost entirely due to die rolls, there is a LOT of unpredictability during the race. Earlier bets have higher payouts, but I often felt like there were so many things going on I had little opportunity to make sure the camel I bet on was the winner. The game might be more rewarding once a metagame develops — after your group has played several times, optimal strategies might become apparent. Eventually, players will have some ability to predict (and prepare for) what their opponents will do. Until your group reaches this point, the roll-and-move mechanic dominates and CAMEL UP! might be too random to give you a satisfying experience.

The next game we played was Marc André’s SPLENDOR, published by Space Cowboys by way of Asmodee. In this engine building game, you and your opponents are Renaissance era gemstone merchants. The player who trades most effectively will earn the most “prestige points” (victory points by any other name).

SPLENDOR is exceedingly simple. On your turn you either collect gems from the bank, or cash in gems to claim a card from the tableau in the center of the table. Once a card is claimed, it provides its own gems and lowers the cost of future purchases. Better cards also have prestige points on them.

The gems are big heavy poker chips that feel great in your hand. They make a satisfying “clink” sound when you stack them. This is the best thing about the game, in my opinion. The quality of the chips and other components is exceptional, but I thought the gameplay was unremarkable.

The engine building in SPLENDOR is so simple, it seems like it should be part of a more complex game. Some of my favorite games include engine building, such as Settlers of Catan, Agricola, and Seven Wonders. What sets those other games apart is that there is more to the game than just the engine. SPLENDOR reminds me of the stereotypical Eurogame, where all you do is push wooden cubes around. The only difference is that the cubes are chips and cards.

It appears that my opinion is in the minority. SPLENDOR is widely predicted to be the winner of this year’s award.

Last up was CONCEPT, a party game from Gaëtan Beaujannot and Alain Rivollet, published by Repos Production and Asmodee. Simply put, CONCEPT is like Dixit in reverse, or charades without the pantomine.

The board has several dozen large, colorful icons arranged in pairs, most of which represent opposites. Some of the pairs include a man and a woman, some animals and some plants, a happy face and a sad face, or the sun and the moon. Players form teams of two. The active team draws a card, selects one of the nine concepts on the card, and must convey the concept to the other players by placing colored tokens on the icons. The player who guesses first earns two points, and the active players each earn one. There is no time limit, although the active team may “give up” if they are unable to get anyone to guess correctly.

I had a blast playing this game. It scratches the same itch that Dixit does, but in a different way. The added twist of playing Dixit in reverse, using images to convey a word, is as brilliant as it is obvious. Party games are not my favorite category, but I have a lot of respect for a well designed party game, and CONCEPT fits that description.

However, this game is not for everyone. I played it on another occasion with one of my regular gaming groups. They tend to like mid- to heavy-weight Euros like Keyflower or Belfort. None of them liked CONCEPT at all, and we stopped halfway through (over my objections). To my delight, the family I played with at Spiel Demo Day enjoyed CONCEPT as much as I did.

Taking a second look at SPLENDOR

The following weekend, the gaming group at West Seattle’s Uptown Espresso held their monthly “Let’s Talk Games” event on the subject of SPLENDOR. I attended in order to learn more about why this game is so beloved by hobbyists.

The discussion, led by local game designer Alex Barbieri, focused on all aspects of the game: theme, artwork, components, strategy, accessibility, and most importantly, the emotions we feel when playing. The group agreed that the quality of the components is fantastic, and the heavy poker chips representing the gems are a large part of the games appeal. The discussion about strategy was interesting to me. Fans of the game have discovered multiple paths to victory. I’m still not sure I like the game, but I think I respect it a bit more.

My prediction for the 2014 Spiel des Jahres

SPLENDOR is already a huge hit. I’m surprised at how many copies I see being played at meetups and gaming cafes. It is the clear favorite to win, based on its simplicity, accessibility, and component quality. However, I’m not sure the jury will make the obvious choice. Famously, last year’s prize went to Hanabi, a controversial selection. I believe that the Spiel des Jahres is making a deliberate attempt to remain relevant by rewarding innovation instead of going with the safe option.

I predict that CONCEPT will win the Spiel this year.

Nominees for the Kennerspiel

Since 2011, the Spiel has awarded the “Kennerspiel des Jahres” or the “expert game of the year,” to a heavier game which appeals more to hobbyists than to families. Blue Highway’s Spiel Demo Day featured all three nominees for the Kennerspiel. I was able to play ISTANBUL, designed by Rüdiger Dorn and published by AEG.

ISTANBUL is a resource management game with a unique take on worker placement. The board is made up of sixteen large tiles representing sites in the city. It was already set up when I arrived at the table, but presumably they can be arranged randomly, giving ISTANBUL a lot of replayability. The goal is to be the first to earn five gemstones, generally by collecting, trading, and otherwise manipulating various resources (like fruit, cloth, and spices).

Each player has a stack of wooden discs, representing a merchant and several assistants. On your turn, you can move your stack of workers up to two spaces. When you arrive at your destination, you either leave behind or pick up one of your assistants, by removing it from or adding it to your stack. Then you can take the action specified by the space you are on. By cleverly planning your moves in advance, you can chain together multiple moves over successive turns so that few turns are wasted. The combination of worker placement and spatial movement is quite innovative.

The spaces you land on give you a wide variety of actions. You can collect resources, sell them at the market for coins, buy gems (victory points), gamble for more coins, or upgrade your carrying capacity, to name a few. The combos you find change with each game because the layout of the city tiles differs during setup, causing spaces to line up uniquely.

Another twist on the worker placement formula is the way blocking works. Landing on another player’s merchant isn’t prohibited, but you are penalized slightly by having to pay the other player a few coins. You don’t suffer the same extreme denial as in Agricola when the player to your right takes wood every single turn, but landing on another player provides just enough disincentive that you think twice about it.

In typical Eurogame fashion, you are rewarded for using your resources as efficiently as possible. ISTANBUL felt a little bit like a puzzle, especially during the last few turns as you’re outracing the other players to the final point. Fortunately, the theme is strong enough and the combos are satisfying enough that it feels more like you are running a business than simply performing a math exercise.

I tend to be picky about heavier Euros. Too often, they come off as dry and muted. The experience of playing ISTANBUL was fun and exciting. I was pleasantly surprised by how much I enjoyed it. I am eager to play it again with a different starting layout.

The other two nominees for the Kennerspiel, CONCORDIA and ROCOCO were also available, but I was unable to play them due to time constraints. It would be unfair of me to make a prediction about that award without having played all three nominees. However, I thoroughly enjoyed ISTANBUL and would not be disappointed if it were to win the prize and find a larger audience.

When will we know the results?

The winners of the 2014 Spiel des Jahres will be announced on July 14.