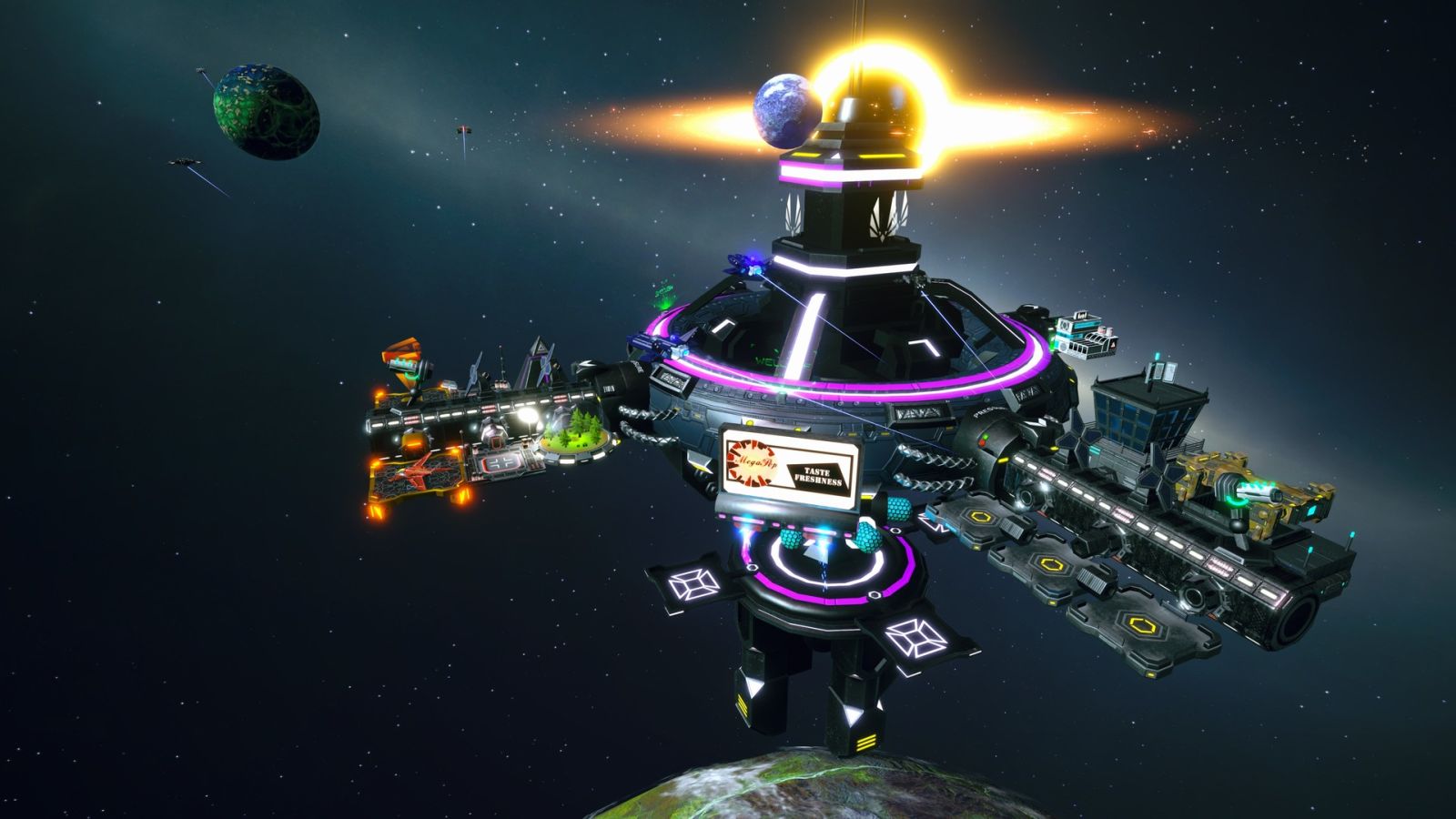 I love Tycoon games. I love building massive automated factories, reviving dilapidated aquariums, creating ancient colonies, and laying tracks to a massive trainyard. I’ve even run a lemonade empire. However, the one empire I’ve not conquered lies skyward. Let’s break atmo and race to the stars as we check out the Early Access build of Space Station Tycoon.

Space Station Tycoon doesn’t start from scratch, not truly. You are given a basic ring station with four arms ready to build. Your job is to not only expand this station to tackle the challenges ahead, both human and otherwise. The only way that’s going to happen is if you manage to also turn a profit in the process. At its most basic, you’ll be building the best little rest stop in the galaxy, but the real question is whether you can transform it into the best destination in the ‘verse.

First things first, you’ll need to extend the first arm of the station and build some landing pads. Those pads will need power, but you can do that with some basic solar panels in a pinch. There’s literally nothing to do at your station, but everyone needs to stop and hit the restroom on a long trip across the stars, so you’ll at least generate a little money from fuel and dock fees. Save enough and you’ll be able to start expanding on those two docks with fresh services. A café seems like a good place to start — everyone needs a little top-off before they set out to their next destination.

Cup of Joe in hand, it was time to make sure I can keep safe this piece of this universe I’ve carved out — time to put up a turret or two. More power, more solar panels, I slowly grow my station until I’ve got long-term parking hangars, and can accommodate larger ships. This thing could actually work! 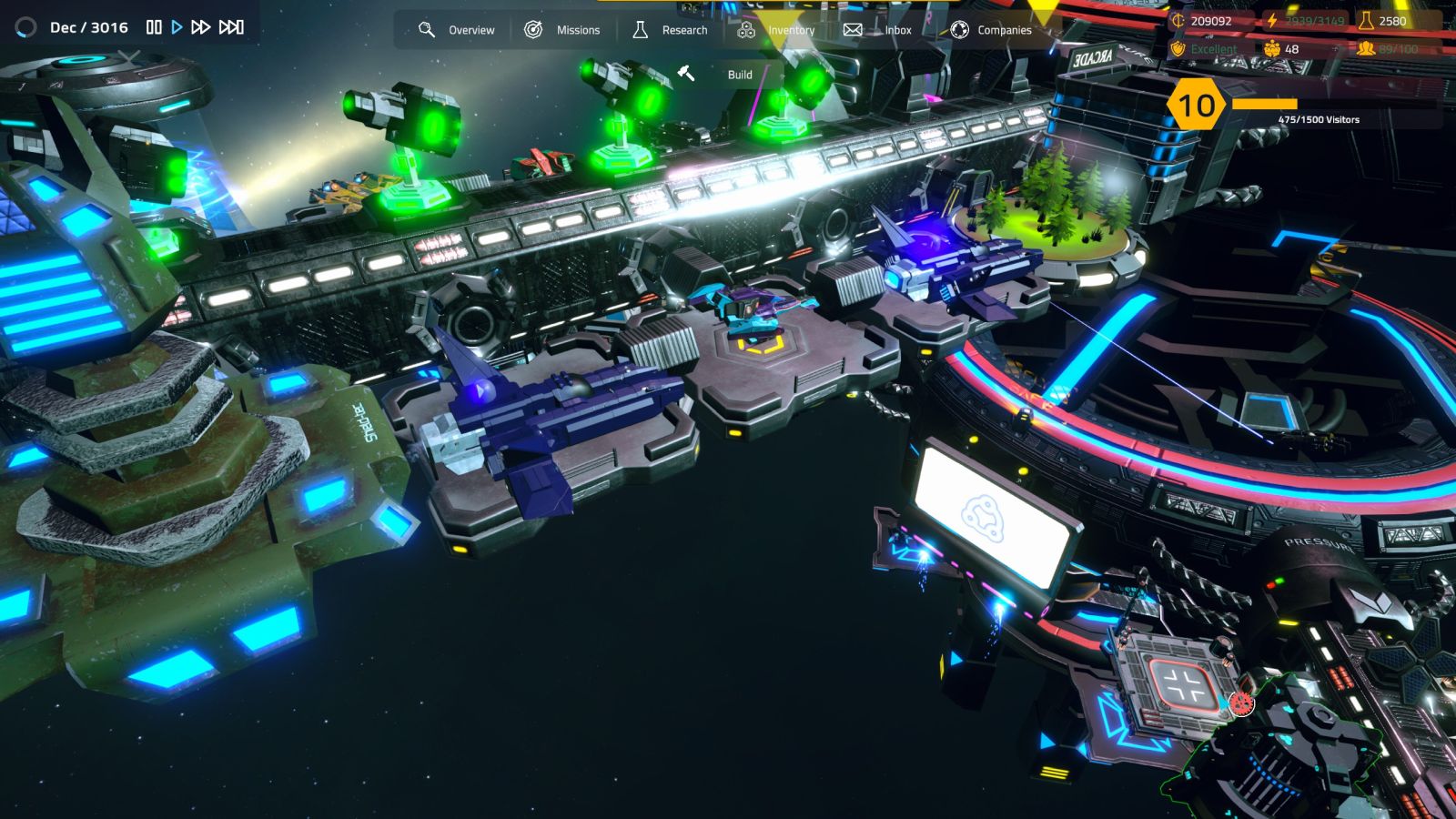 Nearly every building in the station has two to three upgrades that can make them more efficient. Spending materials you’ll pick up from the various trade ships that frequent your station (Mi station name es Tycho Station, bosmang. Beltalowda sasa ke?) you’ll upgrade the AI to make their upkeep lower, raise the effectiveness of your power stations, and even raise the fire rate on your guns. Each level of upgrade requires progressively more expensive and rare goods, so you’ll want to keep an eye on those landing pads for trade opportunities.

Any good gas station needs a repair bay, so that’s what’s next on the slate. Repairs pull in good cash, which helps me start to save some cash for high dollar items like a restaurant or a park — both of which will bring in more families instead of just pulling space truckers. In fact, throwing a billboard on the side of the station may take a little scrip, but if it brings in tourists so much the better.

Once I’ve got my economic engine running, it’s time to…ahh damn it, it’s apparently time for a radiation storm. Space doesn’t care about your plans, and things like radiation storms and the occasional meteor make light work of the buildings on the arms of my station. I’ll need to pick up shields to deal with those things, and that means research. 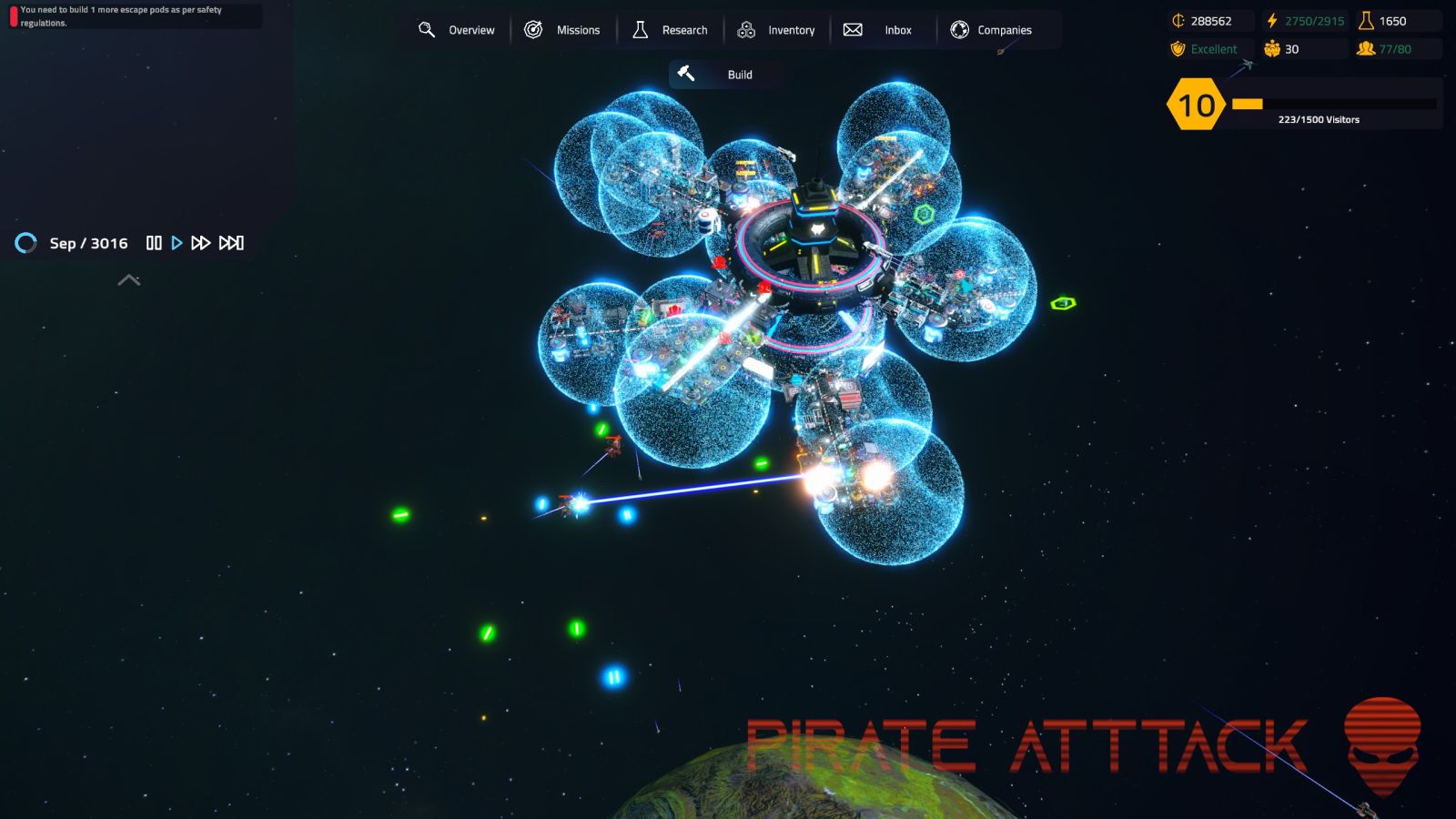 Taking a jog to the left from profitability, I now have to set up a research arm to begin to generate research points. After employing some scientists, I’m able to start researching base improvements and fresh tech. Upgrades to my weapons, utility pods, and my commercial interests come from these trees, though I found more interesting blueprints with the traders on my various landing pads. I was ready to get back to my profitability when the pirates showed up.

Throughout the game you’ll unlock various guns that can be mounted to the tops of your station arms to defend against incoming pirates and meteors. You’ll also eventually develop shields to protect at least a small segment around them, blanketing about five pods with an energy field that can repel attack. Every time an attack or scientific misadventure hits my station, I’m dealing with repairs, starving my economy. Running a station is hard work! Bled completely dry, I take out a $3500 loan to keep from going bankrupt. 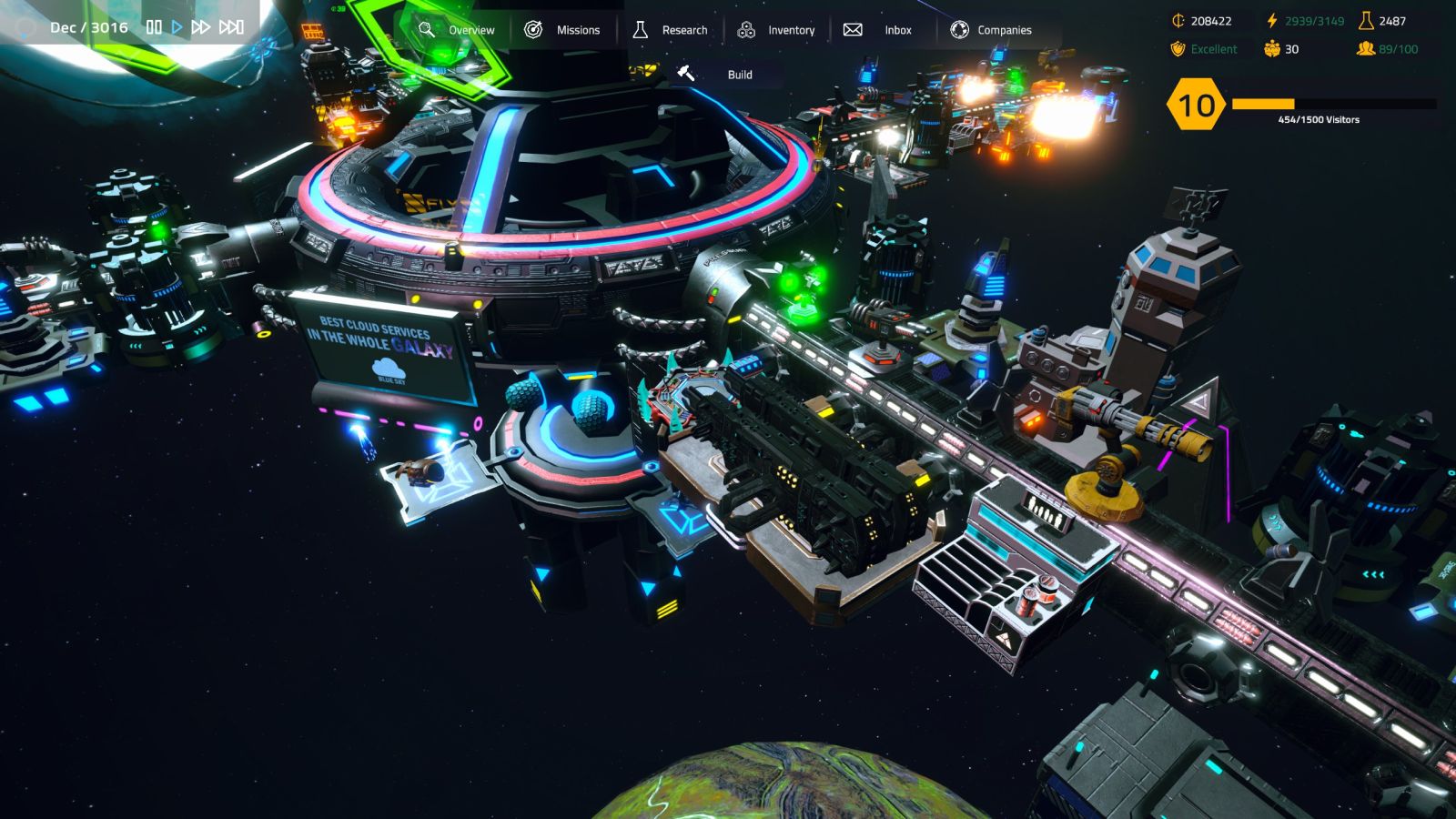 Digging out by controlling my costs, I slowly grow my station and my reputation among my neighbors begins to grow. I begin to use marketing campaigns to bring in more tourists, eventually touching on the very reason I started this station in the first place — aliens. Stumbling on a construction blueprint for an organic landing station, I took my first steps as an intergalactic power merchant. I repair ships, I’ve got a bar, I sell gas, I’ve got a hotel, and enough guns to keep it. Not a bad day at the office, and you can’t beat the view.

I’d be remiss if I didn’t mention just how good the music is in Space Station Tycoon. It’s got a thumping beat, and it matches the overall feel of sci-fi without venturing too far into strange whistles and Theremin sounds. I’m hoping they ship the game with the soundtrack as a download — I could see having this on in the background while I write. 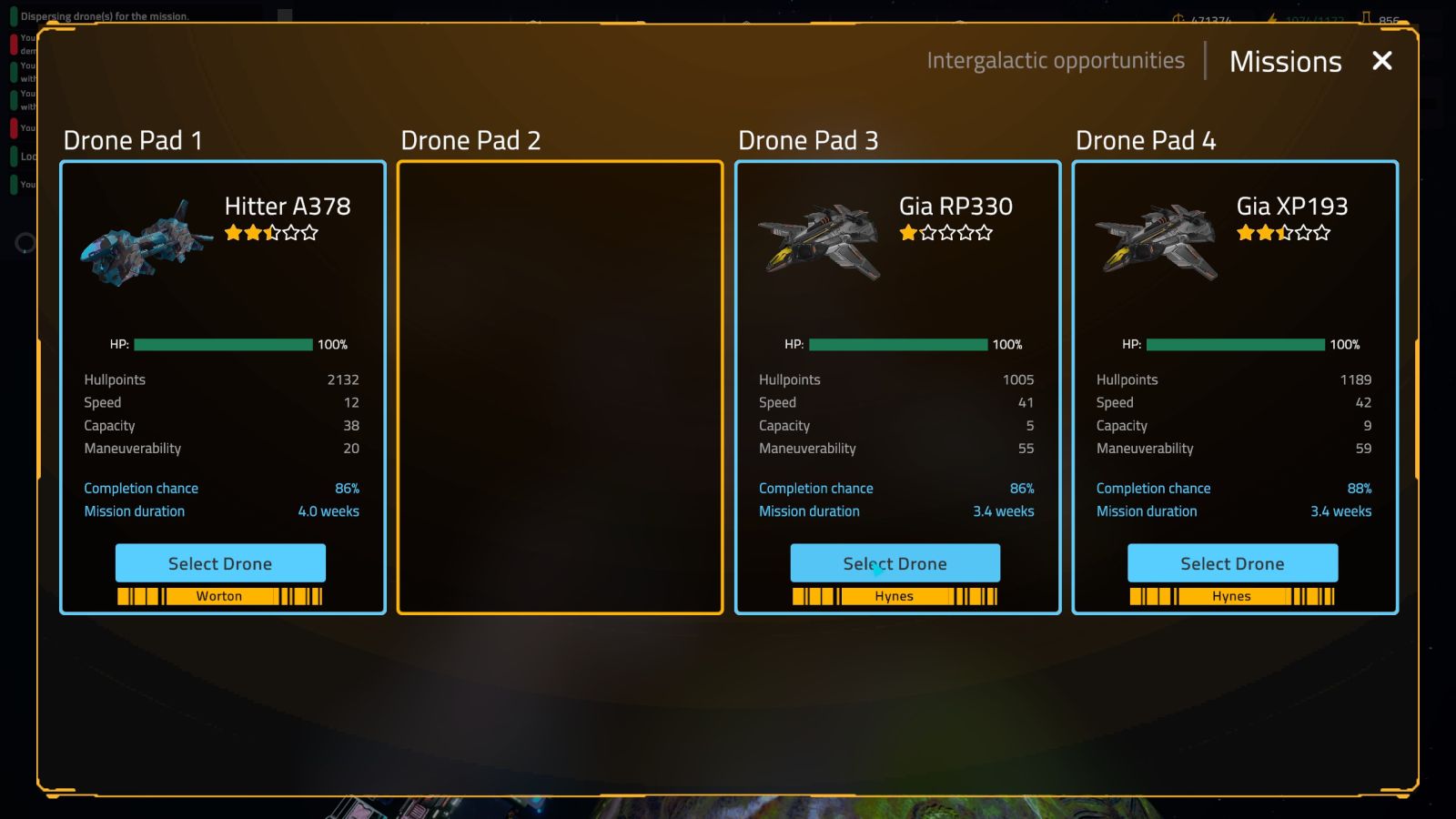 While Space Station Tycoon is still early in development, with a planned launch in early 2022, there’s a lot to like here already. There’s over three dozen buildings to play with, drone missions to gather rare and alien artifacts, and a whole lot of trade tools including a stock market you can use to create your space station empire. A marketing engine lets you plan out the types of people you’d like to attract, and a wide variety of weaponry helps you repel the ones you don’t. It’s a lot of fun, a real challenge, and I’m here for it already. Now, if you’ll excuse me I’ve got a station to run.

For a game built by a very small indie team, and this being their first title, it’s already top shelf in my book — this is one to watch.