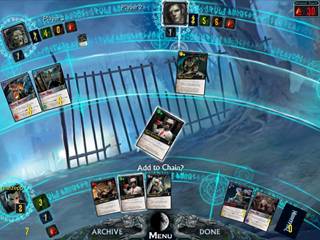 Have you found that some of the deck building games out there are too cheerful out there?  More interested in vampires and werewolves than you are about building your kingdom?  Then you might want to give Nightfall a try.  Even better, it’s out on the iOS systems.

Playdek, a leading mobile video game publisher, and Alderac Entertainment Group (AEG), developer of the award-winning card game Nightfall, have just released the universal iOS incarnation of Nightfall, available in the App Store starting today.  In this horror-themed deck-building game, players are the masters who control hordes of ghouls, vampires and werewolves, as they rely on their strategic thinking and cunning to gain control of a post-apocalyptic world.

The mayhem begins when players claim a team of minions, such as the urbane vampire Yuri Koroviev, kickass human hunters, screaming ghouls, hungry werewolves and more. As master of these minions, players fight to the death, trying to inflict wounds and outsmart their opponents. When the battle is over, the player with the fewest wounds wins.

Get ready to battle those things that go bump in the night.