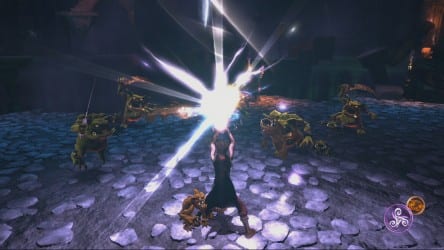 Sony has been hyping their upcoming action RPG game Sorcery for about a year now, and finally the release date of May 22nd is only a couple of weeks away. That doesn’t mean they’re going to let up on teasing PS3 gamers with new information though; a new trailer shows off some parts of the game’s storyline. Sony has emphasized that the storyline and gameplay mechanics will be very closely tied. Check out the trailer after the break.

A lot of the details of the story grew organically out of gameplay. The team would have a cool idea for an enemy or a puzzle or an encounter and I’d weave the rest of the narrative around it. For example, the civilization of the bogeys (an early-game enemy) is crude and brutal because that’s how they behave when they attack. And a lot of the mythology of the Faerie Forest had its roots in the boss battle you fight there. We wanted the player to feel like there was a tight link between the story and the gameplay. Everything you do and see in Sorcery ties into the world or narrative in some larger way.

There’s just under three weeks to go until you can get your hands on Sorcery. It will be quite literally a hands on experience; the game will require PlayStation Move to play. Can’t wait until the end of the month? Watch the trailer below to help tide you over.