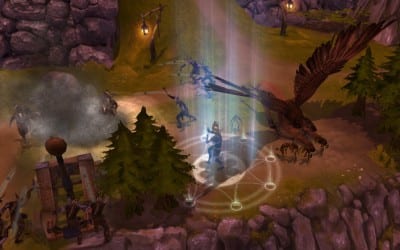 Sins of a Dark Age, a new title from the makers of Sins of a Solar Empire, has released over 20 new screenshots from the game. Although it is not a direct sequel to its predecessor, Sins of a Dark Age follows a similar genre-bending path. The developers refer to the game as a blend between traditional RTS and action RTS, and promise several completely unique features. The screenshots after the break show off some of the newest gameplay elements.

Sins of a Dark Age is a ‘Hero and Commander Strategy’ Game. In short, you will join an online team consisting of one Commander and a small group of Heroes who work together to accomplish a specific scenario goal. Your team will go head-to-head against an enemy team in a short, fast-paced multiplayer match or you’ll work cooperatively against the AI in custom scenarios. You can earn rewards for yourself and your clan, climb the ranks, and watch and share your most glorious replays online. You’ll be able to choose from an ever-growing pool of heroes, commanders and factions each of which supports unique capabilities.

The Sins of a Dark Age beta will go live this summer, with the final release coming sometime further down the line. The game will be a free-to-play microtransaction supported model and initially Windows PC exclusive. Have a look at the screenshots below, or head over to the official website for more information.