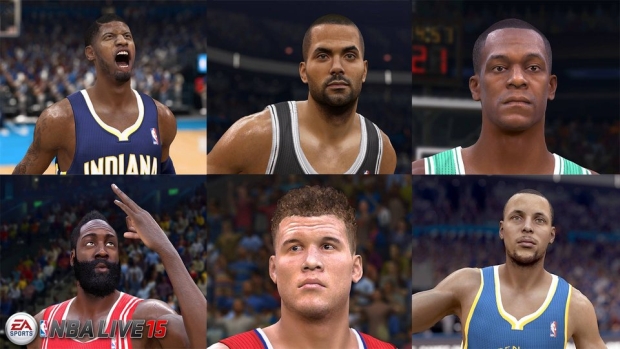 EA Sports will continue their foray into the basketball world once again this year as they prepare to release NBA Live 15. Today, they have released the first screenshot (see: above) of the game which includes the faces of multiple NBA stars.

This first shot is just one in the many that EA Sports will release in hopes of garnering some excitement for a product that was slightly tarnished due to last year’s poor showing. Sean O’Brien, the executive producer on NBA Live 15, recently published a blog giving an update on the game…

We’ve also seen some great progress with gameplay that makes the experience more realistic and, most importantly, more fun with a much better overall flow. We want teams to play just like their real-world counterparts, and to that end we’ve spent a lot of time this season talking with NBA coaches to better understand their schemes and philosophies, which we can then implement in-game. Another equally important area of focus is improving flow and responsiveness in every area where you touch the ball, and we feel that shooting, passing and dribbling all feel much better this year.

He later promised more information about the gameplay come July. NBA Live 15 will launching alongside its competitor, NBA 2K15, on October 7th.