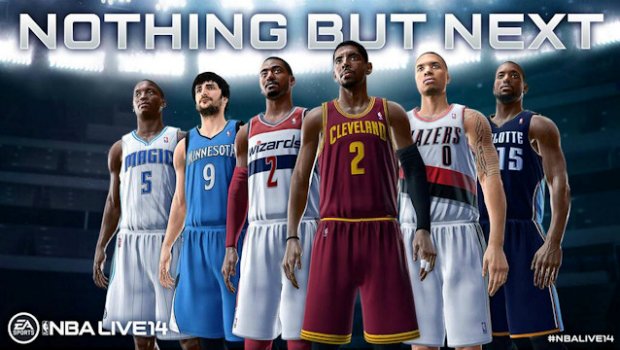 EA has released the lineup of athletes that they are partnering with for their upcoming basketball title NBA Live 14.  Dubbed “Nothing but Next”, the group consists of six of the league’s youngest, most exciting up-and-comers, a not so subtle nod to EA’s high hopes for their next generation product.

For their marketing and development needs, EA has turned to a squad including cover athlete Kyrie Irving of the Cleveland Cavaliers and young stars Damian Lillard (Portland Trail Blazers), Ricky Rubio (Minnesota Timberwolves), John Wall (Washington Wizards), Kemba Walker (Charlotte Bobcats) and Victor Oladipo (Orlando Magic).  Each player lent their time to the development of facial movements, motion capture, signature move creation, and many other aspects of the upcoming game.

“The time, access and feedback these athletes have provided has been invaluable,” said NBA LIVE 14 Executive Producer Sean O’Brien. “We’ve been able to capture signature moves and unique styles through mocap sessions, and their willingness to provide open and honest feedback has helped us do so much more with the game in year one than we ever could have achieved without them.”

In addition, each will have a place in EA’s upcoming promotional materials, which if EA were smart, would include an insane Harlem Globetrotters style 3-on-3 game featuring the six players.  Alas, darn the poor timing on that possibility.

What we can look forward to is commercials (snore) and maybe some fake twitter beefs (double snore) between the players.  It is hard to get excited over an annoucement that boils down to “these are the guys that are going to sell our game to you.”  Perhaps the most forboding factoid in this annoucement is EA’s poor display of team building, as four of the six players on the “Nothing but Next” squad, a moniker that invokes sweet shooting, are well known poor shooters.  That may just be semantics, but it is not a good sign for a franchise trying to resurrect themselves from the shame of Jesus Bynum.

Joking and negativity aside, the group of young players that EA has selected are great and will prove to be long time partners if NBA Live is a success.  The excitement and differing play styles that each bring show the diversity of what EA is working into their product, be it the sweet passing of Rubio, the lockdown defense of Oladipo, the silky-smooth shooting of Lillard, or the all-around budding greatness of Kyrie Irving.