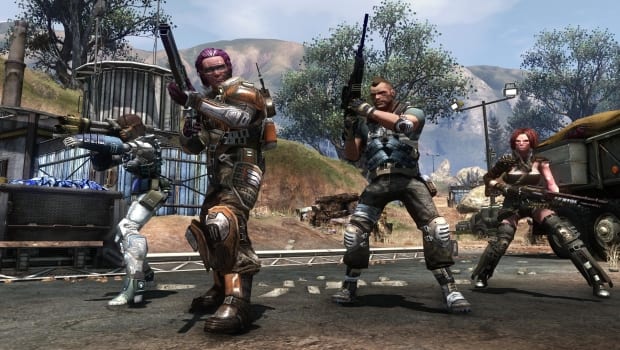 Namco Bandai and Trion Worlds are teaming up on a title that is very much on our radar – Defiance.  The sandbox shooter will be distrubuted by the publisher on Xbox 360, PS3, and PC in both North and Latin America.  There have been a few pretty fantastic looking previews and videos on this, but title might have slipped under your radar.  Do yourself a favor – don’t let that happen.  Here’s what we know so far:

Defiance is an immersive online open-world shooter set in a future shattered Earth. Defiance delivers a revolutionary trans-media experience, as the game will launch alongside the original Syfy® Channel TV show Defiance; with events from each impacting the other’s evolution. The game combines the intense action of a console third-person shooter, with the persistence, scale, and customization of an MMO (Massively Multiplayer Online game), while its TV counterpart exudes the scope, story, and drama of a classic sci-fi epic.

“With its direct connection with the Syfy television show, Defiance is breaking new ground in dynamic storytelling within videogames,” says Carlson Choi, Vice President of Marketing at NAMCO BANDAI Games America Inc. “Never in the history of videogames has player interactions and videogame scenarios had a direct effect on a television show’s storyline and vice versa. We’re excited to see Defiance provide pulse pounding entertainment on two fronts!”

The game is set to hit on April 2nd of this year.  Stay tuned – we’ll be previewing this as soon as we can get our hands on it.