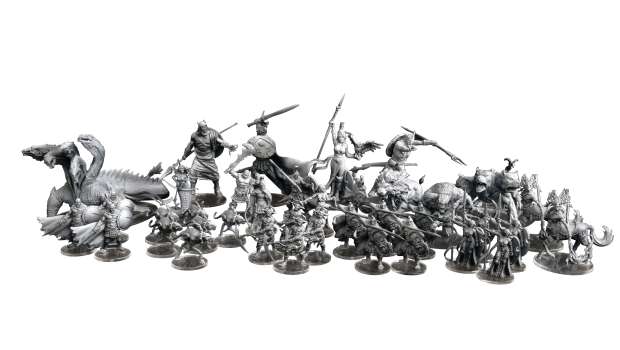 Sometimes a good game comes out but doesn’t stand out like it should.  While Mythic Battles was a fun game, it didn’t capture the setting because the game didn’t have miniatures.  Now Mythic Battles: Pantheon has shown up on Kickstarter to correct this and create a better experience.

“Players will be gods in the golden age of ancient Greece as they battle to become the new ruler of Olympus,” says Léonidas Vesperini, project manager of Mythic Games. “We’ve been developing Mythic Battles: Pantheon for more than a year and the result is a truly epic miniatures board game experience!”

The mighty Titans of Greek lore awoke and unleashed a massive attack on Olympus. While the Titans were ultimately defeated, the world was ravaged and the surviving Olympians now mere mortals. As the former Gods awake to a broken world, Mythic Battles: Pantheon begins their adventure through Olympus, Styx and the Labyrinth of Minos to regain the glory left decimated by the wrath of the Titans. Playing as Zeus, Athena or any number of Greek gods alongside an army of heroes such as Achilles and Hercules and monsters such as the Hydra, Cerberus and Medusa, in victory players will be a god.

Backers can support the publishing of Mythic Battles: Pantheon for a $99 God Pledge which includes the game’s base set with 37 highly detailed figures, 13 Character Dashboards with adjustable stat ruler, 10 engraved dice, 2 two-sided foldable game boards representing four battlegrounds (Olympus, Styx, Tartarus and Minos Labyrinth), one scenario booklet and 15 Omphalos gems. 1000 “Early Bird” backers will get the God Pledge at a $10 discount. All backers will receive a Kickstarter Exclusive Apollo, God of Art and Sun, 70mm figure with Character Dashboard and Activation Cards. The Mythic Battles: Pantheon Kickstarter will also offer a plethora of exciting add-ons, stretch goals, bonuses and other exclusive collectibles and items to enhance game play.

Take a look at the Kickstarter to see how beautiful the game looks.  It’s already fully funded in a matter of minutes, so I have high hopes for the final product.