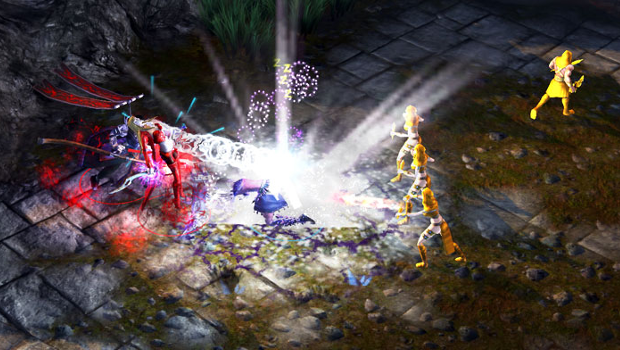 The reign of the MOBA continues! Battle for Graxia – set in the same general mold as League of Legends and DOTA – is now slated to end its open beta period and ‘go gold’ (as much as a free-to-play can) over the next couple of weeks. If you’ve been hunting around for a new MOBA to try out, well, here’s your chance to still get in some beta play before things move on to their next phase.

Battle for Graxia has over 24 immortals to run with, stat tracking, meta-game customization and more. I get the feeling that people are starting to view the MOBA arena as rather over-packed at this point, but really, for someone who just plain loves to play these games (rather than someone who really wants a chance at major-league gaming notoriety a la DOTA2 or League of Legends), seeing more of these titles come out with variations on the core theme has to be a good thing. Either way, those of you who are interested should check out the main Battle for Graxia site for more details. Let’s see if this one does anything to dent the combined LoL/DOTA2 domination of the current MOBA field.