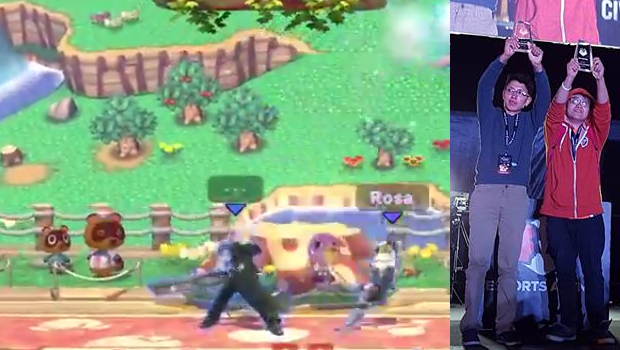 The first day of 2GGC: Civil War, a major tournament of Super Smash Bros. for Wii U, has ended with MkLeo and Javi victorious in Doubles. Cousins, the team hails from Mexico.

Civil War emphasizes the rivalry between ZeRo, the #1 ranked player, and Ally, #2. The name is also a reference to Marvel’s Captain America: Civil War, where there was a split in the Avengers between those who sided with Iron Man and those who were loyal to Captain America. But after a poor performance in pools, the qualifying round, Ally and his teammate Venom were knocked out of the tournament in the first round of the Losers Bracket by none other than ZeRo and his teammate Nairo. ZeRo and Nairo proceeded to win every round up until Grand Finals, where they were defeated.

As much as possible, pools were set up so that those who supported ZeRo (“Team ZeRo”) would face off against those who supported Ally (“Team Ally”). However, the teams were uneven in both size and performance. This meant that some members of Team Ally fought each other in pools, and some members of Team ZeRo fought each other in the bracket. Interestingly, MkLeo and his cousin Javi are on opposite sides in this respect—MkLeo is on Team ZeRo, while Javi is on Team Ally. Clearly, however, the doubles champions didn’t let their personal biases interfere with their teamwork.

2GGC: Civil War continues on Saturday with Singles Pools from 10:00 a.m. to 2 p.m. PST, followed by Singles Top 96 until 8:00 p.m. The remaining Singles matches will be played on Sunday, followed by the Civil War Crew Battle to finish the event. You can watch the action online on 2GGaming’s and eSports Arena Smash’s Twitch channels.