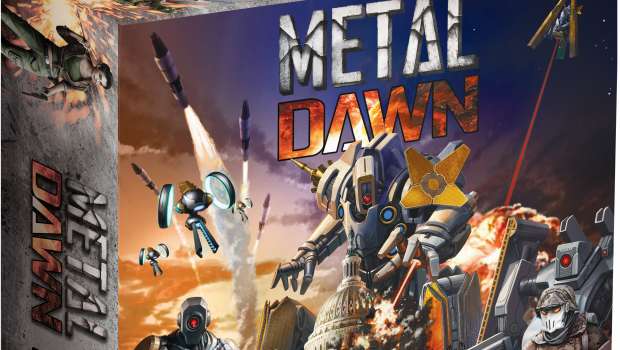 If you’ve seen any sci-fi movies, then you probably already know that the impending robot apocalypse is on its way.  For those not ready to bow down to our android overlords, fighting is the only way out.  Everything Epic games now has Metal Dawn on Kickstarter, a cooperative game to fight against the mechanical machinations.

Everything Epic is proud to announce that we have launched the Kickstarter campaign for Metal Dawn the Board Game! The new sci-fi action-adventure cooperative game from Everything Epic (Publishers of Big Trouble in Little China the Game, Rambo: the Board Game, Secrets of the Lost Tomb). Game designed by Chris Batarlis (SotLT and Big Trouble in Little China: the Game) and Steve Avery (Nothing Personal, Ta Da) with 80’s, Sci-fi, artwork from Shane Braithwaite and Jim Samartino.

“Metal Dawn” is a sci-fi fiction inspired cooperative board game by Everything Epic. The game originated from the designers’ love of films like “Terminator” and TV shows like “24” with real life historical technology like Reagan’s Star Wars program. It’s a thematic, cooperative, tactical game that allows 1-4 players to take on the roles of agents from the divisions of a secret government agency tasked with protecting Washington DC from major attacks like this one, the invasion of a mechanized army lead by a rogue AI satellite in space with one horrific mission, to protect humanity, it must destroy it.

The game provides diverse and iconic zone locations throughout Washington DC where players must task their agents with facing off with the hoards of oncoming Drones, Cyborgs, Exterminators and Nano-bot controlled Soldiers. Beyond that, players must complete missions which will unlock new special abilities or help drive back the influence of Dominus. Players must use all of their skills and tactics to obtain weapons and gear to fight the bots with and they must recover intel to hack Dominus’ kill codes. When they do, they must face-off in the greatest battle of them all, they must confront Dominus Transformed, a giant Robot of kaiju proportions! If they are victorious in defeating him before the Metal Dawn track raises above 10, the players win!

The Kickstarter will run from May 23rd for a full thirty days until June 22nd 2017 and when funded, is estimated to ship out to backers in January of 2018. Gamers are encouraged to back this Kickstarter to get a hold of very special stretch goals and the coveted “Metal Dawn: Tech War Deluxe Kickstarter Limited Edition” version of the game. It will add 2 more players to the game bringing the player count from 1-4 to 1-6 and will also include a vast number of expansion zone locations, weapons, gear, agents, missions, as well as an entire new game mode “Tech War” the competitive area control game!