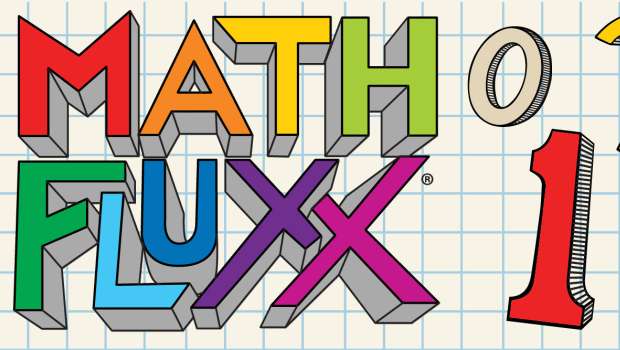 There’s been some complaints about Fluxx being very random, but if you embrace the chaos it can be quite fun.  Now a new version of Flux is coming out that appears to have some unique strategy to make you think, Math Fluxx.

Math Fluxx really is all about the numbers. Players use positive integers (whole numbers) in their quest to achieve a very mathematical Goal. But it’s not just putting 4 and 2 together to achieve the 42 Goal (for example); Math Fluxx also features the Plan B Meta Rule. Plan B puts Special Victory Rules into play which give you a second way to win and require even more arithmetical acumen (for example, the rule “Plus Victory” lets you win if your Keepers add up to the current Goal number).

Math Fluxx is a very special version of Fluxx. It’s as fun as all the other Fluxx versions, but this one actually has a nice emphasis on practical math skills. Math Fluxx is also a great way to introduce the fun of Fluxx into any classroom setting. Because with Math Fluxx, change really is the only thing you can count on and the fun is exponential!

Since one of the majors I graduated with is Mathematics, and it seems like there’s a renewed focus on getting kids to learn math, I’m glad to see games with a heavier math focus.  Look for Math Fluxx in less than a month.