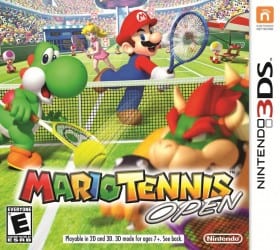 The next installment in the Mario Tennis series, Mario Tennis Open for 3DS, will feature online play with up to four players, and players will be able to view their position in online leaderboards.

In addition to being able to play as numerous characters from the Super Mario games, players will also be able to play as their Mii, which can be outfitted with various Mushroom Kingdom accessories, such as a Bullet Bill outfit or Peach’s shoes.

The Special Games mode in Mario Tennis Open lets players hone their tennis skills while enjoying tennis games with a Mario twist. Players can check out games such as Super Mario Tennis, which puts a classic Super Mario Bros. twist on tennis drilling. As they play through familiar game levels, they can use their tennis swing to stomp Goombas and Koopas along the way.

People can play as their favorite characters from the Mushroom Kingdom or even compete as their Mii characters. They can also customize their Mii characters with Mushroom Kingdom-themed tennis gear, which not only enhances players’ appearances but also can boost their stats. The wide selection of available gear includes Bowser’s favorite racket, a Bullet Bill outfit and Peach’s tennis shoes.

The game will also feature a tennis themed version of classic Super Mario Bros. games, which will feature the tennis racket as a weapon against Goombas and Koopas.