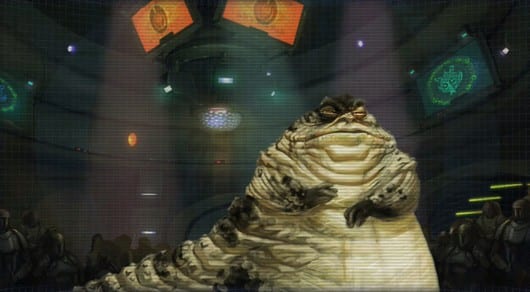 Despite the recent migration to a free-to-play model, Bioware Austin has not let up in creating premium content and updates, and has just announced information regarding their first retail expansion, Rise of the Hutt Cartel. This expansion will include a new world to explore, new quest lines to complete, and a level cap increase to 55. From the press release:

“We know our fans want to keep experiencing the classic Star Wars storylines they love, and that’s what we’re delivering with the Rise of the Hutt Cartel expansion,” said Jeff Hickman, Executive Producer at BioWare Austin. “The planet Makeb is shaping up to be one of our most breathtakingly beautiful settings and the clash with the Hutt Cartel is epic and exciting. And this is just the tip of the iceberg. We have a lot more surprises in store for our fans next year!”

The Digital Expansion: Rise of the Hutt Cartel will send players to Makeb, a dual-faction planet where players will continue their battles with the merciless Hutt Cartel. During their journey, players will meet new allies, make new enemies and uncover the cutting-edge technology on this vibrant planet. Experience five new levels of story-driven missions to an already expansive epic online universe that will raise the level cap to 55. Pre-Order is available now online at www.swtor.com/buy.

Rise of the Hutt Cartel will be released digitally and is available for pre-order now. Free-to-play gamers can purchase it at the full retail price of $19.99, and subscribers will be able to snag it at a 50% discount of $9.99. All players who pre-order before January 7th will be able to access the expansion content five days before everyone else. No release date has been announced for the expansion as of yet, but we will update you with more information as we get it. Are you still playing The Old Republic, or have you moved on to greener pastures? Is this worth it or is it “too little, too late?” Let us know what you think in the comments below.