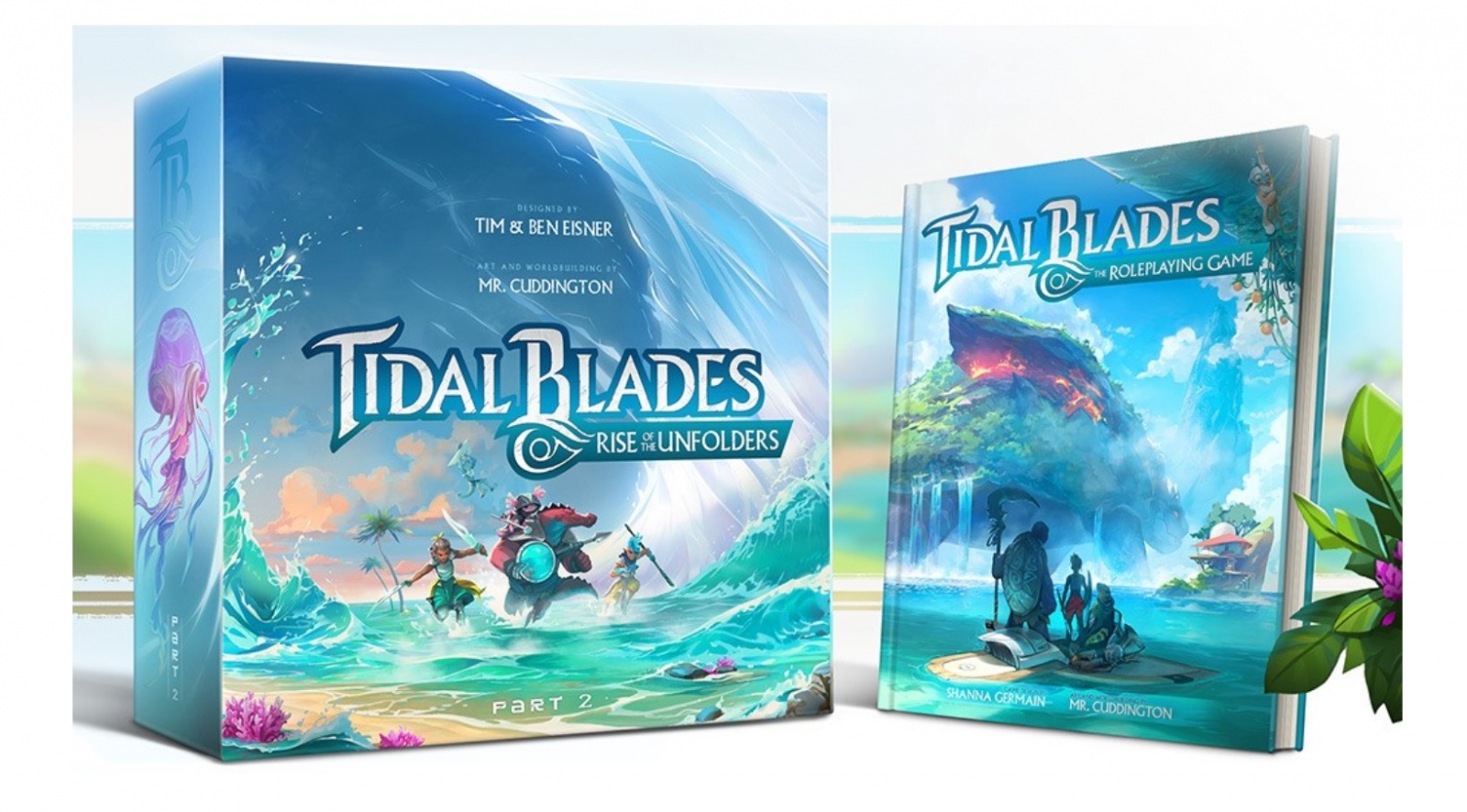 At today’s Skybound Holiday Xpo, Skybound Tabletop announced the launch of their Kickstarter campaign for Tidal Blades 2: Rise of the Unfolders and Tidal Blades: The Roleplaying Game. You can read below for more details:

LOS ANGELES 12/10/2021 — As announced earlier today at Skybound’s Holiday Xpo, Skybound Tabletop will launch the highly anticipated Kickstarter campaign for the Tidal Blades 2: Rise of the Unfolders cooperative board game and Tidal Blades: The Roleplaying Game (RPG) on February 22, 2022. Following the hugely successful Kickstarter campaign and subsequent retail launch of Tidal Blades: Heroes of the Reef, Part 1, Part 2: Rise of the Unfolders and the RPG promise to add to the narratively-rich fantasy water world of Tidal Blades in the vast floating city of Naviri, where there has never been a greater need for heroes to defend the island realm.

Designed by Tim and Ben Eisner, with art by creative duo Mr. Cuddington, Tidal Blades 2: Rise of the Unfolders features 21 scenarios with unique maps and 40+ hours of gameplay, inviting players on a quest through the lush and vibrant lands of Naviri, while protecting the realm from the ever-increasing threat of sea monsters from the mysterious frozen section of space and time, the Fold.

Produced in partnership with Monte Cook Games with game design by Shanna Germain and art by Mr. Cuddington, Tidal Blades: The Roleplaying Game grants players the ability to build their own adventure amid the paradise-like setting of Naviri. The cypher system RPG book focuses on the ways in which characters and the community can work together to keep their beloved home of Naviri safe and thriving, despite the obstacles to overcome and challenges to face—namely powerful sea monsters that have started breaking out of the hyperdimensional barrier that protects the area. In this fantasy water world, wonder blends with advanced time-altering technology to deliver a role-playing game like no other.

“We are incredibly proud of the world we have built for Tidal Blades and how it continues to evolve. It is a world that entices even the most elite gamer groups, and we are thrilled to continue the quest we set out on in Part 1 with some of the best gameplay we have ever produced in these two new games,” said Garima Sharma, Skybound’s Vice President of Product & Strategy. “The narrative is more dynamic, the gameplay more engaging, and the art more incredible than ever, and we can’t wait to kick off what promises to be a thrilling campaign in February.”

“It’s been such a blessing to spend these last few years doing art and worldbuilding for this amazing universe,” said Mr. Cuddington. “We’ve been wanting to make a colorful, highly-narrative dungeon crawler for years and Rise of the Unfolders just knocks it out of the park. Working on the RPG book simultaneously was so much fun. We think Tidal Blades fans will really enjoy all the lore that has been packed into it, and we cannot wait to see all the unique adventures players will create once they get their hands on it!”

Tim and Ben Eisner added: “We feel so lucky to have been able to design a brand-new game in the world of Tidal Blades! Working alongside Mr. Cuddington and the Skybound tabletop team, we have created what we feel will be a thoroughly immersive and dynamic game system. The game is packed with a ton of exciting new systems that give it shape and form, with the most prominent and exciting being the Nexus grid action system. Each turn, players will play one card into their Nexus grid, a 3 x 3 grid board, and then activate all the cards in the row or column where the card was played. This allows players to build up powerful combos and have action packed turns. We can’t wait to share this game with boardgamers everywhere!”

For more information and updates, fans can sign up for campaign notifications here.

About Tidal Blades 2: Rise of the Unfolders

The Tournament of Heroes has ended and you have been named as one of the Tidal Blades, elite guard and champion of our island realm. But you have no time to rest on your laurels as the Fold, the frozen section of space and time that protects Naviri from the sea monsters, is becoming ever more erratic. The High Engineers of the Citadel have entrusted you with the Nexus, a device that will let you venture into the Fold, unfreezing time.

With your fellow Tidal Blades, you must enter the Fold to unlock its mysteries as you attempt to recover the old guard Tidal Blades who were trapped inside when the Fold was created. On your journey to become a true Tidal Blade you will explore throughout the isles of Naviri to find a way to save the island realm.

In Tidal Blades 2: Rise of the Unfolders, each player takes the role of a new Tidal Blade. In this cooperative, narratively rich board game, players will work together through 21 scenarios. Each hero is equipped with a Nexus grid, allowing them to build up actions and create powerful combos. Each turn you will choose one card to play, add it to an open space in your Nexus grid, and then activate all spaces in either the row or column containing the played card.

Throughout the campaign you will grow and enhance your character by adding cards to your action deck, leveling up your traits of Spirit, Focus, Resilience and Synergy, unlocking powerful skills, and gaining specialized Items to boost your action cards.

Featuring 21 scenarios with unique maps and 40+ hours of gameplay, Tidal Blades 2: Rise of the Unfolders invites you on a quest through the lush and vibrant lands of Naviri. Along the way, you will meet valuable allies, have chance in counters with Golfins, Iota, and other denizens of Naviri. Battle a seemingly endless army of monsters and enemies as you fight your way to the center of the Fold.

Will you solve the mystery of the Fold in time and save Naviri, earning your place among the Tidal Blades of legend?

About Tidal Blades: The Roleplaying Game

Tidal Blades, and its setting of Naviri, has a unique feel and sensibility. It’s a game and setting that shines bright with a community, helpfulness, joy, delight, science, and celebration. In this fantasy water world, wonder blends with advanced time-altering technology. Crocs, turtles, and fish-folk cohabit peacefully with humans in a vast floating city. People trade with fruit and travel between the various docks on watercrafts, powered by small energy devices known as shells.

Despite the paradise-like setting, Naviri is in dire need of heroes. Powerful sea monsters have started breaking out of the hyperdimensional barrier that protects the area. And of course, just like any city, Naviri has its share of smaller dangers—dark corners, dark dealings, and dark characters—that all need to be dealt with.

While there are definitely obstacles to overcome and challenges to face, the focus of the game is on the ways in which characters and the community can work together to keep their beloved home safe and thriving. Characters may find themselves gathering hard-to-find ingredients for a much-beloved local chef, tracking down a group of thieves who’ve stolen an unstable piece of technology, or battling a giant sea monster with a volcano on its back—all while racing watercrafts across the sea, attempting to befriend local wildlife, or competing in contests of skill and strength.