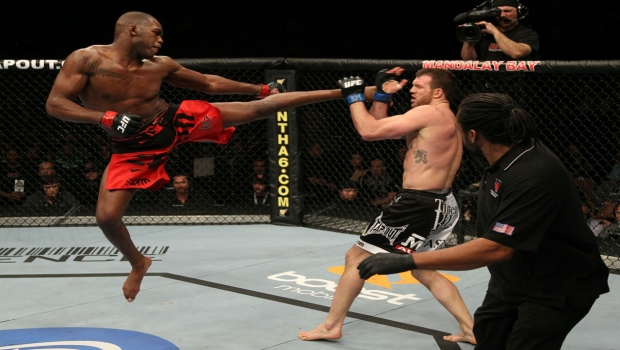 Light Heavyweight Champion Jon Jones gets the honor of being the first fighter on EA Sports UFC cover.   In a tradition carried by their other sports titles, they will now select a second cover athlete with votes from the fans.  There are currently 16 fighters squaring off for the honor of sharing the cover with Jones.  I’ve got my pick – let’s see how we can vote:

The second fighter will be selected by fans in the EA SPORTS UFC Cover Vote presented by MetroPCS. The 16 fighters featured in the cover vote include current UFC champions and top contenders, such as Georges St-Pierre, Ronda Rousey, Anthony Pettis, Chris Weidman, Johny Hendricks, Jose Aldo, Alexander Gustafsson, Miesha Tate, and more. Fans can cast their vote now at UFC.com/covervote to ensure their favorite fighter gets to share in the cover spotlight.

Once fans cast their vote, they will have an opportunity to enter the MetroPCS EA SPORTS UFC Cover Vote Sweepstakes, where they can win a chance to experience the thrill of fight night first-hand. MetroPCS will pair one lucky winner with the fighter who wins the EA SPORTS UFC Cover Vote. At the fighter’s next UFC bout in the continental United States, the sweepstakes winner will have the ultimate experience – walking out of the tunnels with the fighter and their team.

The EA SPORTS UFC Cover Vote presented by MetroPCS begins today and will run until December 1, 11:59:59 PM EST. The vote will consist of a weekly round-by-round, 16-fighter, head-to-head elimination tournament. Fans worldwide are encouraged to vote as often as possible at UFC.com/covervote to ensure their favorite fighter advances through the rounds.

I personally would vote for Georges St-Pierre, but I could easily vote for Urijah Faber or Michael Bisping.  All in all, there really aren’t many bad choices in the list.

EA Sports UFC will be the first fighting game to use the new Ignite Engine.  From what I saw at E3, we have every reason to be excited.  As a lifelong martial artist, I’m a big fan of the UFC, so expect that I’ll keep you well informed on this title.    Look for EA Sports UFC on PlayStation 4 and Xbox One in 2014.