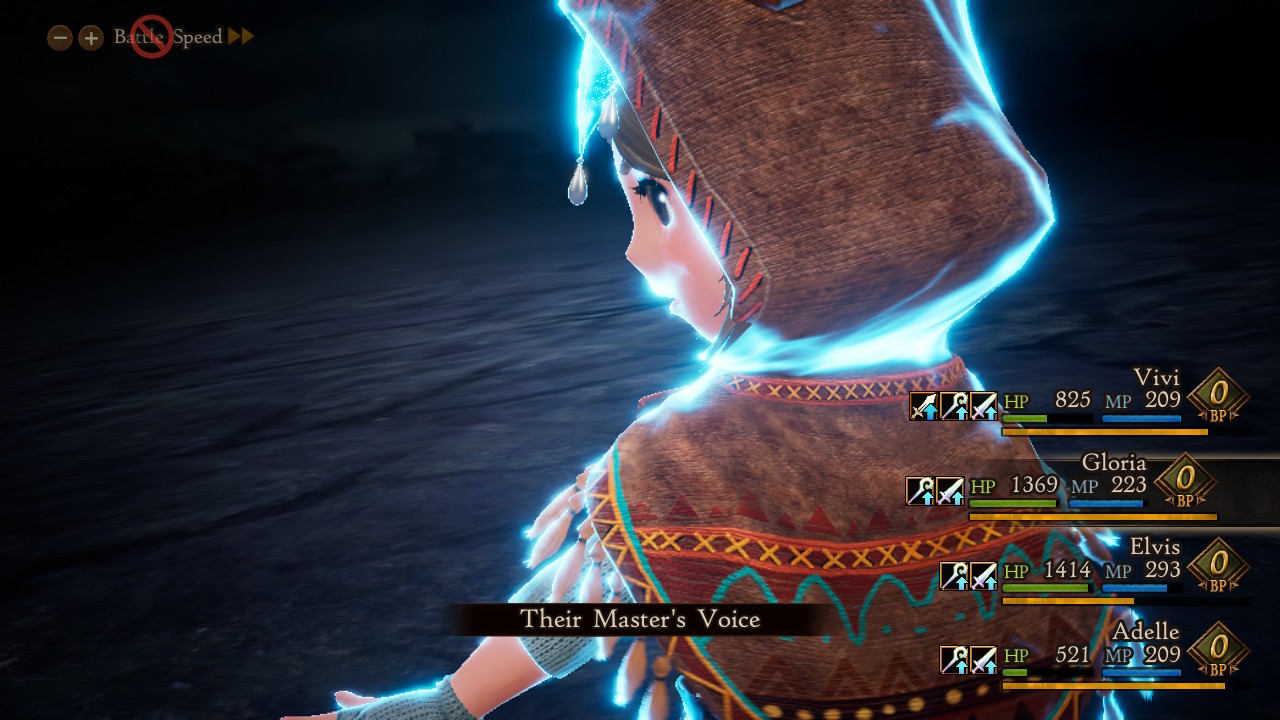 If Bravely Default and Bravely Second harkened back to Final Fantasy’s 16-bit era, Bravely Default II (for some reason not titled Bravely Third) emulates FF’s 32-bit days. The jump here from the 3DS to the Switch has the same magnitude as going from FF6 to 7, complete with the same caveats too.

The recently released demo gives you a taste of what Bravely Default 2 has to offer, including most of the game’s first chapter and several jobs to play around with. Yes, the lovely Job System returns in full force here, you start out with five (Freelancer, White Mage, Black Mage, Monk, and Vanguard) with two unlockable through the story (Bard and Beastmaster). Your four party members can each take on two jobs at the same time, a main and sub job with only the former gaining Job Points after battles. While your main job determines the weapon proficiencies and the bulk of stats, you’ll also be able to use all that character’s learned skills from their sub job in combat. In addition, characters can equip certain abilities from any job that they’ve learned. For example, if Adelle has learned “Bare-Knuckle Brawler” from leveling up Monk, she can then set that skill as any other job to gain its boost to physical attack and accuracy while both hands are empty. In previous games you could create some cool synergies using these systems, like using the Pirate’s provoke ability to take damage and the Dark Knight’s huge boost to attack when low on health. Unfortunately, there aren’t really combinations like this in 2’s demo. This could be the small amount of jobs available, but I found myself sticking with each character’s already assigned job and very rarely using even the sub jobs’ in battle skills. 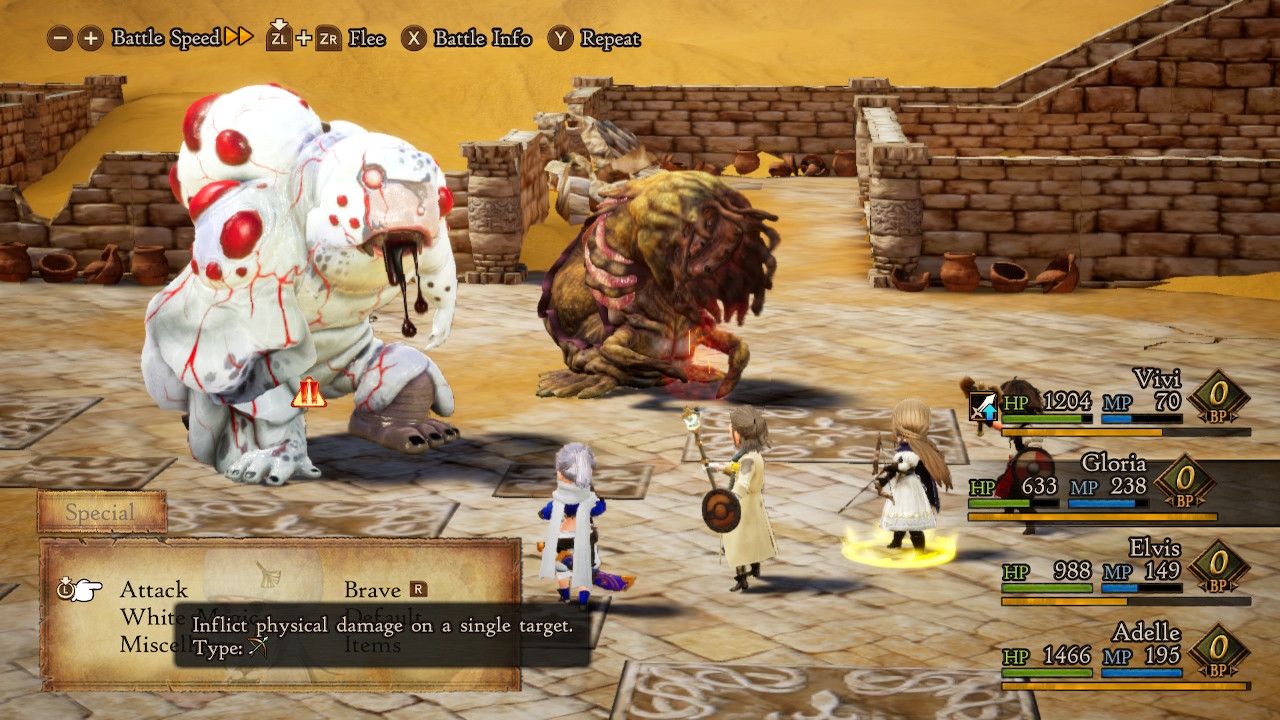 This makes the battle system in the demo feel kind of rote, to be honest. I love turn-based RPGs, but what’s here lacks the flair in previous Bravely games. Outside of the two boss battles, I rarely used the Brave and Default actions, which let you spend and save BP respectively to either take turns early or stock them up. Don’t get me wrong, battles are still fun, but they’re not AS fun as even the first two games’ demos. Visually, Bravely Default 2 has a lot less character. While environments are gorgeous, the dungeons lack the painterly aesthetic the series is known for. In general, everything has a lot more detail and leaves less to the imagination which, in my opinion, makes for a less magical experience. It’s like going from Final Fantasy 6 to 7; with the former’s pixel art you can feel an epic battle against a speeding train as your party runs away or the calm of a hidden village of espers. However, while the latter’s pre-rendered backgrounds may be beautiful, they’re less imaginative and comparatively dull. You can’t really get multiple interpretations of what Cloud looks and acts like when you see it in even 7’s now dated visuals. 7’s Remake succeeded in this aspect by adding even more detail, but Bravely 2 just looks less interesting than the 3DS games. Menus look bland, though I can appreciate the Map aesthetic they’re going for, but Character models in particular look uncanny and frankly bad. They still retain their cartoony shapes and proportions, but now they sport realistic eyes, mouths, noses, clothes making them very off putting. Take a look at this comparison and disregard their resolutions, which one looks more appealing? 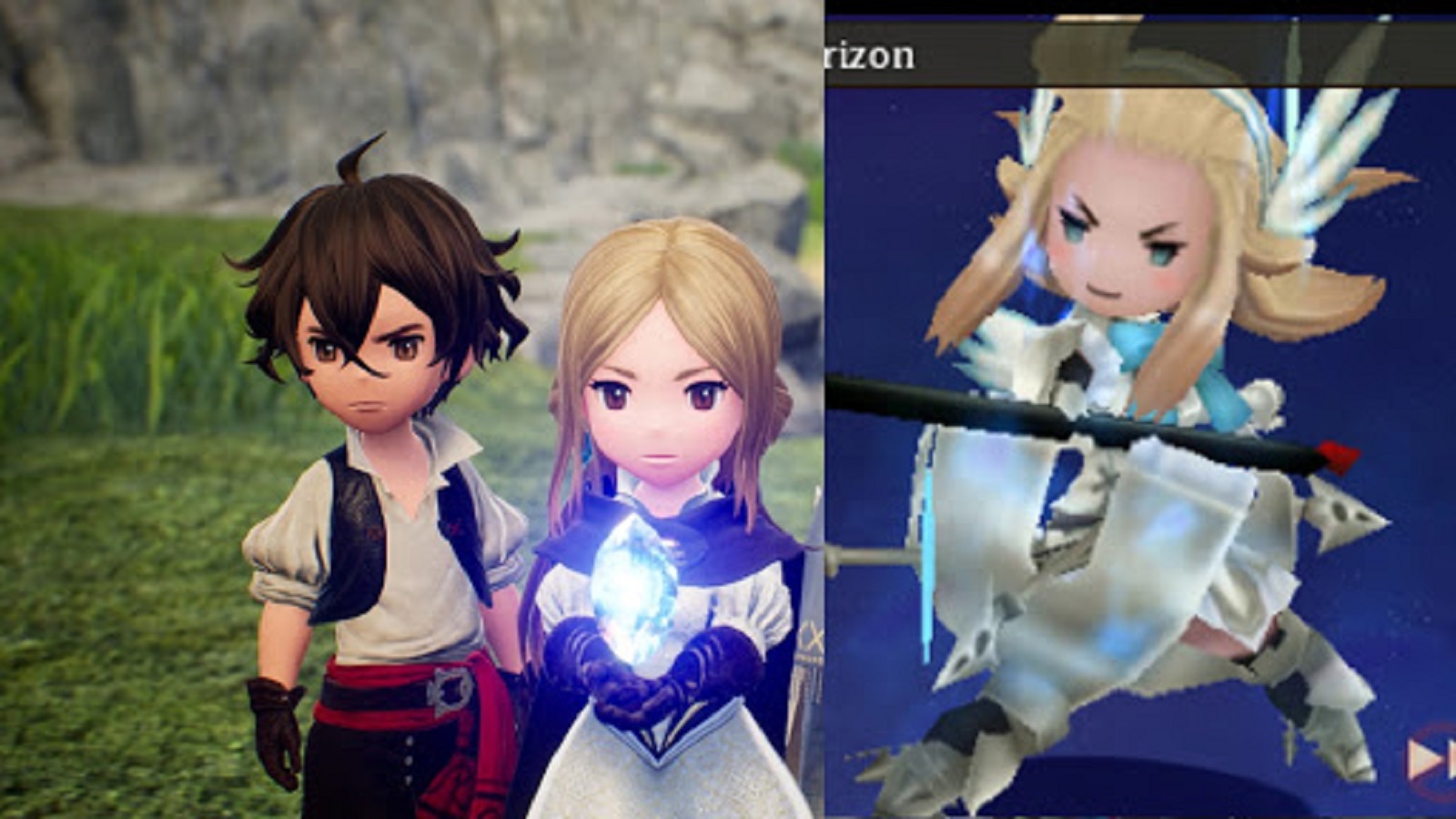 Continuing with the Final Fantasy comparison, Bravely 2 appears to have ditched the city building aspect of the first two games in favor of a card game called B ‘n’ D. I’m not usually one for card games, but I do enjoy the occasional game of Triple Triad and this minigame is actually a pretty fun distraction. Like Triple Triad, the goal of the game is to capture more of the play space than your opponent. Instead of cards having numbers attached with higher numbered cards capturing lower valued cards, each card has a configuration of spaces they either capture or negate. Surrounding your opponents spaces with yours will turn their square over to your color, while negating a space will turn it back to neutral. There are a few other types of cards to mix things up, but those are the basics and it makes for a fun distraction. I may actually find myself playing a game occasionally for fun.

The story here is what we’ve come to expect with the Bravely games, in that it’s very campy and saccharine so you either love it or hate it. Once again, this may be due to the scope of this demo, but I found I didn’t particularly like the characters nor felt invested in the plot. Using Bravely Second as an example, the three musketeers characteristics of your party in the demo made me instantly fall in love with Yew, Nicolai, Janne, and even Magnolia. Yew in particular took his job far too seriously as a knight, but was balanced out by Janne’s hot headedness and Magnolia’s aloof attitude which made Janne and Nicolai’s immediate betrayal in the main game hit much harder than it should have. Bravely 2’s party on the other hand feels like less interesting versions of the first game’s cast. Seth is a bland Tiz, but more bold and with a pirate flair; Gloria is a stand in for Agnes but with less of a personality; Adelle replaces Edea but complains a lot more; and Elvis… he’s alright, considering how creepy Ringabell was in hindsight. Again, only time will tell if the context of the final game changes this, so I hope these characters have a lot more to them than what the demo presents, it’s just disappointing considering how excellent the first two games’ demos were. 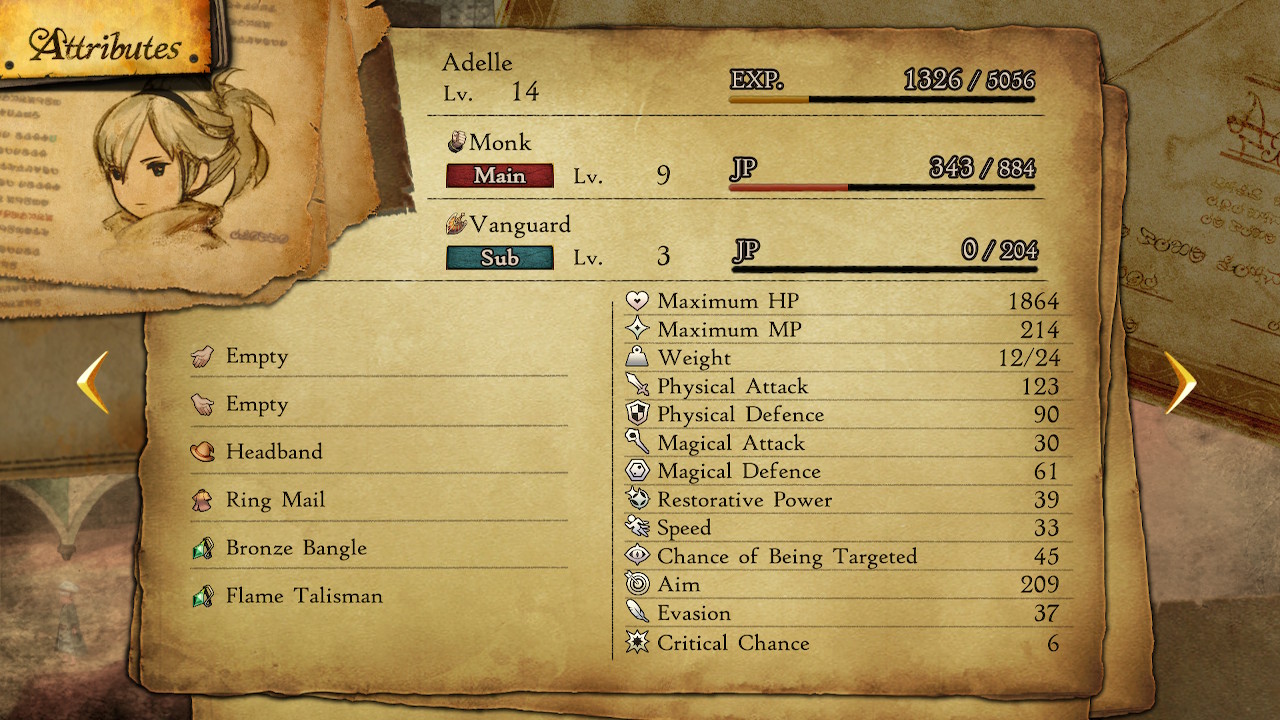 While I am still looking forward to Bravely Default 2, these demos have left me a bit more cautious since the initial announcement. Sure it’s mechanically solid, but the magic and experimentation of the original two seems to have been lost. I have a few other complaints, like the unappealing battle menus, the more immediacy of taking an action instead of planning out a turn ahead of time, the only slightly helpful addition of showing who’s turn is up next, the weird stuttering the game occasionally has, and the inability to switch around your party order along with the lead character. While I don’t think this will be as enjoyable an entry as the previous two games, I’m sure it will be a fun turn based RPG with an excellent soundtrack at the very least. And hey, it could always surprise me.