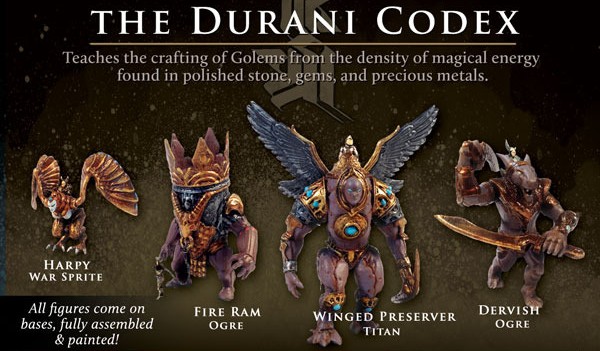 The Eye of Judgement was a fun game, but getting the camera set up with the right lighting was a pain that made it difficult to play with any regularity.  The concept was very cool, but trying to integrate the board and cards with the PS3 was less than successful.  With the advent of tablets, we’ve seen several board games ported for iOS and Android.  Now Harebrained Schemes is trying to integrate the two with their project Golem Arcana, which launched recently on Kickstarter.

Tabletop miniatures games are not known for their ease-of-play. The creators of BattleTech, MageKnights and HeroClix at Harebrained Schemes are hoping to change the way that miniatures board games are played with Golem Arcana. Today, the company started a new Kickstarter campaign for Golem Arcana, a digitally-enhanced miniatures game that eases play with pre-painted Golem figures and an app that can be downloaded to iOS and Android smartphones and tablets serving as the game’s rule book and referee all in one. By removing tabletop miniatures gaming’s long startup time, friction, and other clutter, Golem Arcana lets players focus on the fun of sitting around the table with friends and family playing a strategic miniatures game with a deep story and complex gameplay.

With Golem Arcana, Harebrained Schemes is introducing the next generation of tabletop miniatures games. Harebrained Schemes has created a TDI (tabletop digital interface) stylus that with one touch can identify a character and a region on the board, and via Bluetooth, display and track their characteristics and status on a mobile device through a mobile app. The stylus is the first seamless connection between the physical tabletop and the connected digital world, matching physical Golems on the board with virtual Golem Knights and Ancient Ones in the app. Though the Golem Arcana game and story are deep and sophisticated, this digital enhancement allows for the game to move quickly and makes it accessible to a wide audience – all of the game stats and record keeping is handled by the game’s TDI stylus and mobile App.

The app includes the ability to save your game in progress and upload the stats of your game automatically.  Organized play can be kept accurately since nothing will need to be written down.  New scenarios can also be updated to the app.  The figures look amazing, and the integration with the figures and the tables appears to enhance the game instead of being just a gimmick.  If you enjoy miniatures games and have a tablet, I highly suggest checking this out.