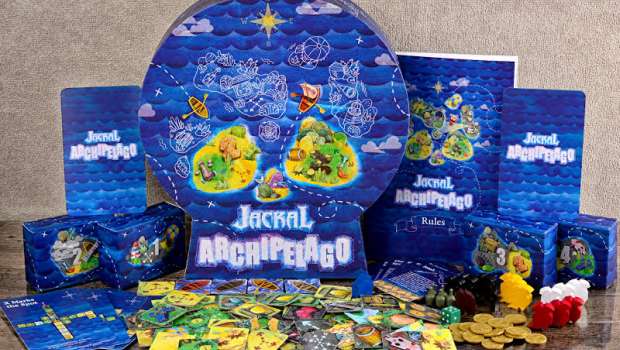 While not as prevalent as zombies, it seems like pirates are becoming a more common theme in gaming.  With games like Black Fleet, Rum and Bones, Merchants and Marauders, Pirate’s Cove, and Dead Men Tell No Tales, there’s plenty of pirates to go around.  Now Mosigra Studios is bringing out a new pirate game to Kickstarter called Jackal Archipelago.

Welcome to a nearly uninhabited island where the Jackal, an infamous old pirate, buried his treasure. It is now your task to first explore the island, find every last gold coin and haul it all back to your ship – or else be overtaken by a competing gang of freebooters. The game board is a large map of Treasure Island, made up of “land” tiles initially placed face down in a random order. This means that the island will be unique and completely different every time you play. When a pirate enters an unknown area, they turn over the tile and explore it.

You control three pirates who can move across the island, explore, haul treasure, do battle with other pirates, or perform special actions such as meeting natives, garrisoning a fort, or even taking flight in a hot-air balloon. To win the game, you must not only find the Jackal’s buried treasure, but you must also successfully drag it back to your ship. One of the most interesting strategies in the game lies in intercepting an opponent’s pirates while they are carrying gold, or cunningly poaching piles of coins while they are poorly guarded.

The element of chance involved in Jackal is minimal, and your success in the game will largely be determined by your tactical ability.

It’s sold over 150,000 copies in Russia, and it’s already over halfway to it’s goal on Kickstarter.  If you want to do some swashbucking, then check it out.