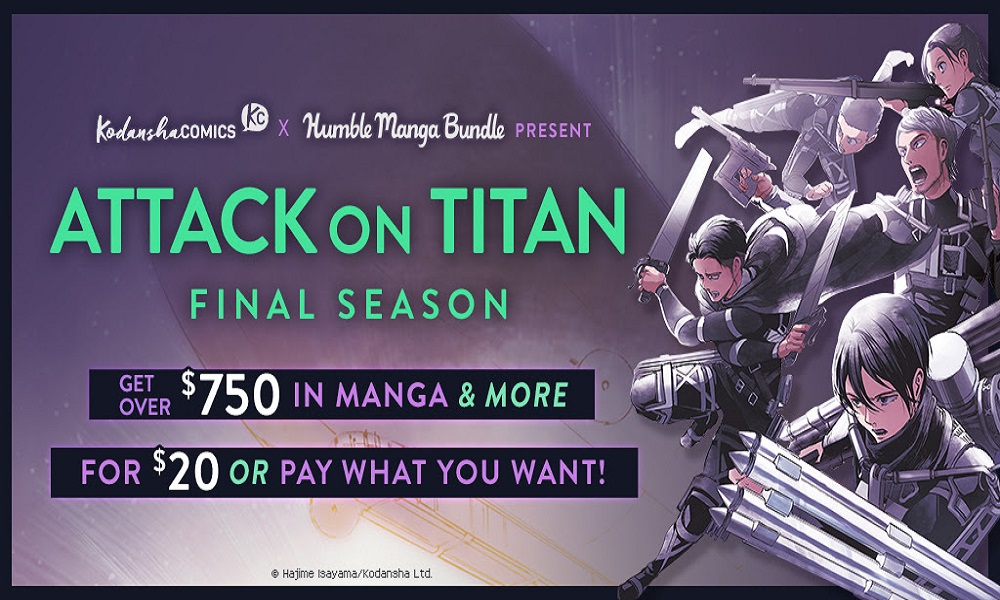 Yesterday, Kodansha USA announced that it has teamed up with Humble Bundle to release the Attack on Titan Final Season Manga Bundle for three weeks. The bundle includes almost every spinoff title of the popular manga franchise as well as every volume up to 26 for the main Attack on Titan series.

Just in time for the final season of the hit anime, Kodansha USA and Humble Bundle have teamed up to launch the Attack on Titan Final Season Humble Manga Bundle! Right now, fans can get over $750 worth the original Attack on Titan digital manga, its spinoff series, light novels, guides, and even audiobooks, for only $20. It’s a perfect jumping on point for new fans of the franchise or those that only know the anime, as well as a great opportunity for existing fans to build-up their Attack on Titan library!

Read ’em anywhere: The manga, light novels, and guides featured in the Attack on Titan Final Season Humble Manga Bundle are all available digitally in multiple formats including CBZ, PDF, and ePub, so they work on your computer, e-readers, iPads, cell phones, and a wide array of mobile devices!

Support charity: Not only will you be immersing yourself in the action-packed world of Attack on Titan but you’ll also be donating to great causes! Choose where the money goes — among Kodansha Comics and our preselected charities, the ACLU and Doctors Without Borders — or choose a charity of your preference via the PayPal Giving Fund.

The full slate of titles are available for $20, though you can pay as little as $1 to get a sampling of the franchise. While almost every Attack on Titan title released in western territories is available in this bundle, this marks the digital debut of both Attack on Titan: No Regrets Complete Color Edition and Attack on Titan: Anime Guide. Both titles were previously only available in their physical form. Stay tuned for more comic and manga news here on Gaming Trend.