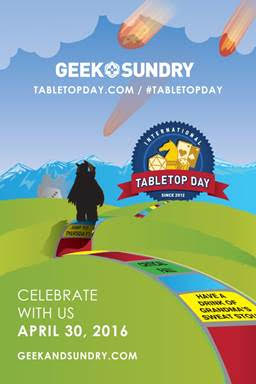 Get ready to celebrate your favorite parts of tabletop with the world! Day long gaming and livestreams for charity are inbound.

Geek & Sundry’s innovative and interactive International TableTop Day returns for its fourth year on Saturday, April 30th. The 2016 global gaming event will feature a 24-hour live stream, a new Geek & Sundry Preferred Partner Network of retailers, countless celebrity guests and a charity stream with all proceeds going to the national nonprofit KaBOOM!, which is dedicated to bringing play into the daily lives of all children, particularly those growing up in poverty in America.

While fans and participants are encouraged to take part in any of their favorite games, the Geek & Sundry squad will be playing classics like Superfight, Epic Spell Wars, Drunk Quest, Star Realms and Awesome Kingdom, among others.

For more on International TableTop Day, head to TableTopDay.com and be sure to check out the official announcement featuring a video with an original ITTD-themed jingle from TheDoubleClicks.

Interested? Check out Geek & Sundry or KaBoom! yourself to get involved the day of!