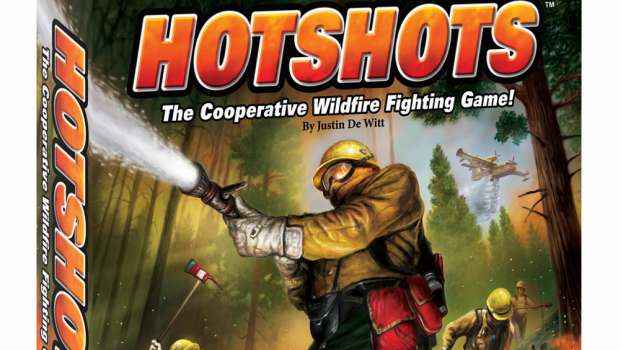 Fireside Games is well known for it’s successful Panic series of games.  If you are a fan of cooperative games, it’s likely that at least one of them is on your game shelf right now.  However, it looks like they are heading in a completely different direction for their next cooperative game Hotshots.

Fireside Games is thrilled to announce the release of Hotshots, a cooperative, press-your-luck firefighting game, on May 31, 2017. Hotshots is designed by Justin De Witt, who is also the creator of the hit cooperative game Castle Panic.

Crews of 1 to 4 players take on the roles of wildfire fighters (Crew Boss, Spotter, Swamper, and Sawyer) with special abilities and roll dice on burning terrain tiles to match the combinations shown on the tiles. The more faces they roll, the better they fight the fire. Players can choose to cut Firebreaks, which protect tiles from embers blown by wind gusts, or push their luck to reduce Flames and possibly even generate Reward Tokens. If players bust and fail to match at least 3 of the 6 symbols on the tile, the fire grows. Another option is to maneuver Vehicles (Air Tanker, Helicopter, and Brush Rig) to save the forest.

Flame tokens are added at the end of each player’s turn by the draw of a Fire card, which can bring about light or strong wind gusts, increase the strength of the flames on certain tiles, and start fires. Too many Flame tokens will cause a tile to Scorch and be lost. Losing a terrain tile could also affect the game play. Some tiles are tied to crewmembers’ special abilities, while others help the firefighters and still others cause the fire to spread in unique ways. If 8 tiles or the Fire Camp Scorches, the game is over and the forest is lost. But if the intrepid crew can extinguish the fire, the team wins together.

The press-your-luck mechanic with ratcheting rewards creates a lot of great tension, and the variety of ways to fight the fire makes for interesting choices. The modular tile layout and Fire cards bring high replayability to the game, and the beautiful acrylic Flame tokens provide an enticing table presence.

This is a great theme for a cooperative game.  Hopefully it will have gameplay to match.  Look for it this May.