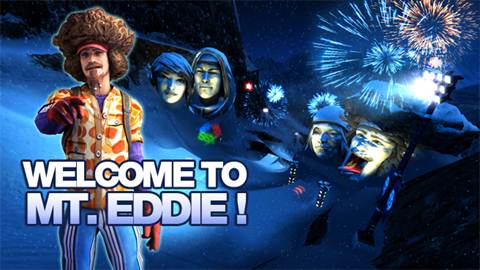 One of the most exciting things about the release of EA Sports SSX earlier this year was that it marked the return of a fan favorite series from the last generation of consoles. But just in case reliving some of the snowboarding action of the early 2000’s wasn’t nostalgic enough for you, EA Sports has released two new sets of DLC featuring content from previous games in the series including SSX Tricky and SSX 3. The DLC will allow players to enjoy old school songs and characters, as well as a new course inspired by the series’ roots. Read on for more details.

The new Mt. Eddie course will be of particular interest to fans of the earlier games. The mountain will feature fireworks, huge jumps, grindable billboards, loops, halfpipes, and other elements reminiscent of classic SSX Tricky gameplay. Still not enough nostalgia for you? Mt. Eddie also has its own version of Mount Rushmore, sporting the faces of fan favorite SSX characters carved into the mountainside. The DLC packs can be bought separately for $5.99 (480 MS Points) each, or as a bundle for $7.99 (630 MS Points).