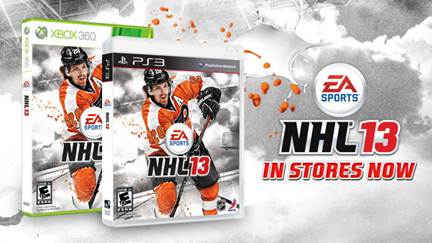 EA Sports’ NHL series released their newest addition to the series today with NHL 13. EA Sports is already boasting positive feedback, including praise for its high-level of innovation.

Early critical reception for NHL 13 has been extremely positive with Bleacher Report calling NHL 13 a “strong early candidate for sports game of the year”, while Jeff Bakalar, CNET says that NHL 13 is “the most realistic hockey game ever”. NHL 13 represents the biggest year-on-year leap for the franchise on this console generation and has been eagerly anticipated by sports fans across the world.

EA goes on to detail many of the new features that make this installment of NHL one to remember:

NHL 13 also features community-requested improvements to core offline and online modes, including Be a Pro, EA SPORTS Hockey League, and many more.

Fans eager to get their hands on the game can pick up their copy today at most North American retailers.  Look for our review in the next few days!