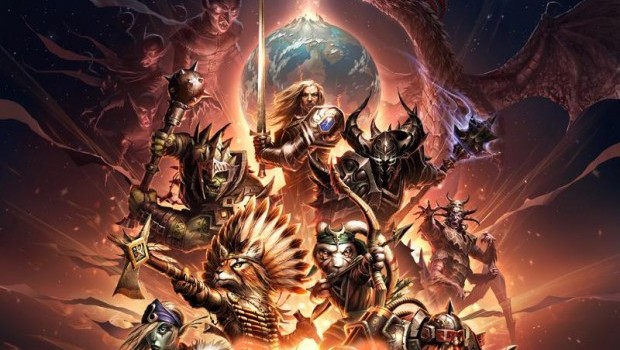 Cryptozoic currently publishes the World of Warcraft trading card game.  While they have been publishing this for a few years, they have several other card games under their belt as well, including the Penny Arcade deck-building game.  Now they have announced thay are going to try to move a brand new CCG into the MMO arena with HEX: Shards of Fate.

A completely unique gaming experience, HEX: Shards of Fate was created from the ground up as a digital trading card game, free from the restrictions that come from being shackled to physical trading cards. HEX: Shards of Fate combines the amazing community and storytelling aspects of a massively multiplayer online roleplaying game (MMORPG) with the compelling collectable and strategic game play of a trading card game (TCG) to create an entirely new gaming experience. Players will make their way through the dynamic MMO world featuring champions, dungeons, raids, and epic gear. Cards can be found while battling within the world or purchased in 15 card Booster Packs.

The magic of HEX: Shards of Fate comes from the digital nature of the game. Not only are player’s in-game avatars able to level up across a range of stats, but the cards themselves have unique attributes as well. Each card has a “double back” which reveals digital challenges and achievements for that card. Cards also have socketed slots for adding gems that fundamentally change how the card plays, allowing players to modify and individualize their collection to suit their play style, with billions of potential results.

I remember a Blue Dragon CCG that included a role-playing element to it, where certain characters could level up.  HEX sounds completely different though, and the choice of getting a new card or upgrading it sounds unique.  If you are interested in this, you can check out the Kickstarter here, and if you support them, you can get early access into the beta.