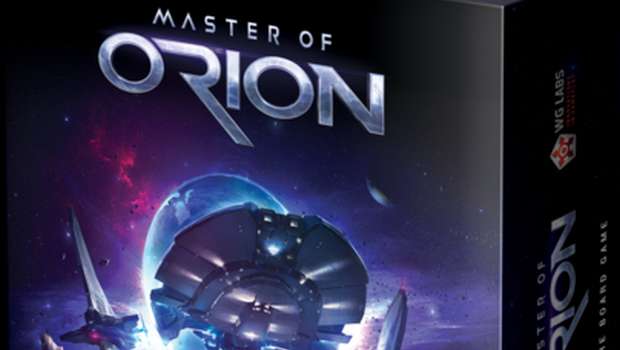 Master of Orion is one of the most beloved strategy PC game series created, at least for those who have forgotten about the third iteration.  While a new version arrived for the PC this past August, there hasn’t ever been a version for board gamers.  That is until now.  Hobby World has developed a version, and Cryptozoic is publishing it.

Cryptozoic Entertainment, leading creator of board games, trading cards, and collectibles, and Hobby World, leading Russian publisher of board games, announced today that they are partnering to release Master of Orion: The Board Game in the U.S. in early 2017.

Based on the classic strategy video game, the competitive tableau-building game requires 2-4 players to choose from several races (Humans and various alien races), build systems using their cards, and manage their resources in order to win. Designed by Ekaterina Gorn and Igor Sklyuev and adapting the art style from the 2016 reimagining of the video game, Master of Orion: The Board Game has been one of the moss buzzed about games prior to and during this year’s Essen Spiel board game trade fair.

In Master of Orion: The Board Game, each player begins with a board that has four tracks: Food, Fleet, Production, and Loyalty. The starting numbers on these tracks depend on the race a player chooses, with choices including fan favorites the Darloks, Psilons, and Humans. Each round, players gain resources and a number of actions, as determined by their board. Players spend their action cubes on each turn to manage their resources (Food, Fleet, Productions) and build systems. Since this is a tableau-building game, players use the cards in the deck to build up to four systems, each comprised of a maximum of five cards that represent various Structures, Ships, and Planets. Victory Points are gained by playing cards, creating matched sets, attacking opponents, and having certain resources and cards at the end of the game.

The game’s end is triggered in one of three ways: when a player has 0 Loyalty, a player has five cards in each of their four systems, or eight rounds of play have been completed. There are different paths to victory as players can focus on military means—training spies and attacking alien planets—or the path of creation—controlling the weather and constructing space fleets. The winner is the player with the most Victory Points, who is deemed the leader of the most developed civilization and therefore appointed as the Emperor at the Galactic Council.

Hobby World released the followed statement: “We are very proud of Master of Orion. It is a captivating and multifaceted board game that we hope will gain the appreciation of gaming fans. Our previous experience joining forces with Cryptozoic Entertainment to release Spyfall showed us there were only best-in-class professionals working at the company. We look forward to developing our partnership with Cryptozoic further by working together to release one of Essen Spiel 2016’s favorites, Master of Orion: The Board Game, in the U.S. market in early 2017.”

Master of Orion: The Board Game will be available at retailers nationwide in early 2017. Cryptozoic and Hobby World will announce a specific release date in the coming months.

It sounds like it has gotten good buzz and it was playable at the GTS Come and Play Day.  It’s unfortunate that it won’t be available until sometime next year, but at least we will see a release here.