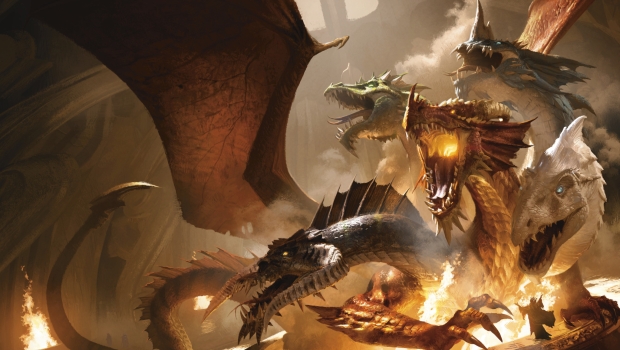 When you have a property like Dungeons and Dragons that has lasted for three decades, it’s not surprising to have it rebooted every so often.  Wizards of the Coast has been working on the latest edition for a while, with their D&D Next program.  Next week the Starter Set for the fifth edition will be released.  I had the opportunity to ask Nathan Stewart, Brand Director for D&D at Wizards of the Coast, about the history and the future of the franchise.

Dungeons & Dragons has been around for a long time. What do you feel has contributed most to its longevity?

D&D has been a thriving brand for 40 years so understanding what is essential to the D&D experience is core to the future success. Fantastic adventures with your friends that bring you face to face with mind-blowing monsters would definitely be at the core. That makes for a great game night, but those adventures create something more for the players and that’s the bond of friendship. So many friendships were forged playing D&D together and those shared experiences have created bonds that go well beyond the gaming experience.

You took a unique approach with the new D&D set by letting others play the game and get their feedback. Was it hard to determine what the best feedback was?

The playtesting process was a great way to ensure we were making the best edition of the rules possible, but deciphering player feedback to make sure we were really making the game better took care and diligence. Sometimes you get obvious direction from the testers, but there’s also a lot of analysis of the data to help determine the right direction. Each packet released focused on a few key areas. If people were happier from playtest packet 1 to 2, why? What was making them happier? Through the responses to our questions and scouring through blogs & forums we identified what went well, what went wrong and what went so-so with the last round, and then we worked until the R&D team was confident they had the best solution based on all the data analysis.

What were some of the drawbacks to this approach?

As mentioned, the playtest process was great for ensuring quality, but it meant we didn’t have an exact timeline for the process. From a planning standpoint we didn’t know when we would be shipping new products. The answer from R&D was, “when we are done”. Once we were a little over a year into the process we started getting a better idea of timing but still didn’t have exact dates. Although our fans and retailers appreciated us taking the time to do it right, they still wanted the new edition, so staying committed to the process and keeping ourselves from rushing the product to market was key to staying true to our vision of quality.

What would you consider to be some of the best changes made with this new rule set?

The goal from the beginning has been to make an edition that appeals to players of all backgrounds, which means flexibility. We are story tellers and want to share those stories with all the players no matter what their play style. The best changes in the new rules allow us to focus on the experience and lets fans customize how they want to engage with it.

How are you integrating the new D&D set with your online tools?

We have some exciting announcements to make for PC/mobile tools coming soon, but can’t share more at this time.

Will we see any of the new rules integrated into D&D Online or the Neverwinter MMO?

Our emphasis is telling fantastic stories to all D&D players, no matter what platform they choose, so that our fans can share a cohesive entertainment experience. So while you won’t see explicit rules in Neverwinter or DDO, you’ll see the factions and villains from our big story arcs, and you’ll see a continuity between all of our games set in the Forgotten Realms, including new games we add to the mix. Moving forward the rules will be under the hood as the engine powering the adventures but the player experience will be focused on the entertainment.

We know that the Player’s Handbook, Monster Manual, and Dungeon Master’s Guide are all coming. Do you know what books will be released next?

Our two main adventures for the year, Hoard of the Dragon Queen and The Rise of Tiamat, will be released in a book format. These two Tyranny of Dragons adventures will fuel hours of entertainment for our tabletop players at home, in-store and at conventions. We have some other products yet to be announced and we’ll bring the adventure to life in lots of ways other than books.

What are the release dates for the upcoming releases that you can tell us about?

August 14th is the big date we are focusing on right now. The launch of the Tyranny of Dragons storyline is going to be huge. Fans can start playing through this epic story with initial products that support it: Hoard of the Dragon Queen, D&D Player’s Handbook, Neverwinter: Tyranny of Dragons and our in-store and convention play that will be kicked-off on Aug 14.

So far the feedback on the new Starter Set has been very positive.  It will be released next week, so be sure to pick up your copy.  It will include everything you need to play up to a level five character and get you prepared for the Tyranny of Dragons coming in August.