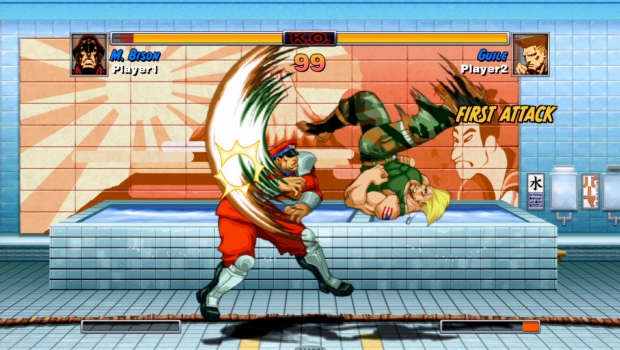 David Sirlin’s career has gone through a couple of shifts.  From competing in fighting game tournaments to balancing characters in fighters to creating his own line of board and card games. With the recent release of Yomi for the iPad, I knew that if I had the chance to interview him I couldn’t contain it to eight questions.  The first Q&A with him focuses on his fighting game days.

Who are you and what is your current position?

I loved video games ever since I was a kid. The Atari 2600 was my first game console, followed by the NES. I played in arcades all the time too. I grew up with gaming.

Most of your games seem to involve fighters. Is that your main area of interest?

It’s just an area I know a lot about. I was a tournament player in fighting games, I helped organize the Evolution Fighting Game Champtionships, I represented Street Fighter Team USA in an international tournament in Japan, I wrote the book Playing to Win, and I was lead designer of Street Fighter HD Remix (and Puzzle Fighter HD Remix, too). Fighting games aren’t my only interest, it’s just that there’s a whole lot to draw from there. I’m very influenced by the concept of asymmetry in games, meaning having a whole bunch of characters to choose from that all play differently.

How did you end up working for Capcom on the Street/Puzzle Fighter series?

I worked for Backbone Entertainment, and one of the things they did was ports and emulations of classic games. I worked in game design as well as pitch development (which means writing game design proposals good enough to land new clients). There was an opportunity to do a collection of classic Capcom games and the management asked if I would be the lead producer, since I loved Capcom games the most of anyone there. I said yes, and Capcom was extremely happy with that first collection, so we did more projects together. Street Fighter HD Remix and Puzzle Fighter HD Remix were also brewing in business development in the background during that time, so it was kind of natural to for me lead those projects once they became a reality.

Was it difficult to get the changes made to the characters?

I’m not sure how you mean the question. A lot of the difficulty comes in knowing what to change in the first place. I actually had a year or two of lead time where I knew that this project might happen, and I talked with tournament players from all over the country about what kind of imbalances they disliked, and what they’d do about it. I had to make it part of casual conversation though, and keep it secret why I was so interested in that sort of thing until we could announce the game.

You might have meant technically though. In that sense, it was enormously difficult. Street Fighter has a very old codebase and it’s confusing to modern programmers. I should say “mystifying,” I think. I was given the resources of “0 programmers” to work on changing characters. I am not a programmer myself, either. So it was initially hopeless. This was, to me, the most important thing to me in the world though. A chance to improve the balance of the game I loved, and it was now or never. I studied the code myself, looking for patterns. Lots of it is like a hex dump though, just pages of numbers and letters in grids. The rest is in assembly, which I can’t read at all.

I was so determined, that I got a Japanese book of all the hitboxes in the game (showing exactly where the secret rectangles are for each move, where exactly it can hit or get hit) and I looked for outliers. Moves with very unusual hitboxes. I think Ryu’s low fierce and Blanka’s low fierce were both examples that were unusual in some way. I looked through the hex numbers long enough to finally figure out which numbers corresponded to blanka’s low fierce. It was a major breakthrough when I was able to change that box and prove that it was actually different in the game. A couple programmers who sat next to me thought it was so pathetic what I was going through that they looked over the code a little bit to give me some pointers. I was able to read the assembly code long enough to figure out how to find the input commands for moves, so I changed Cammy’s spinning backfist to not overlap the motion of her Hooligan throw. Again, it was a breakthrough in showing that I did have the power to make some of the design changes I wanted.

Capcom was very interested in this and it lead Backbone to finally officially allocate about half of one programmer’s time to assist me. So bottom line: it was technically a struggle to make the changes, and that’s separate from the whole other part about knowing what changes to even make. In the end, I was able to do about 95% of what I wanted though, or more.

Game balance is kind of a thing I’m forced to care about. If a game doesn’t hold up to intense play, it’s just really disappointing. So you practice and practice and then at a high level, the game falls apart? That’s no good. The challenge of game balance becomes orders of magnitude more difficult when you have asymmetry—a cast of characters who all have to be fair against each other. So caring about game balance comes with territory. It’s not an interest to me in an of itself, but rather as a necessary component of making asymmetric games that don’t fall apart.

What are some of the biggest myths about balancing fighters?

As far as biggest myths…I’m not really sure. I’ve encountered beliefs all over the map, crazily extreme in multiple directions. Like to some, they think horribly balanced games like Street Fighter 3: 3rd Strike are “perfect” and that disastrous balance problems shouldn’t be fixed. Well, they should be fixed.

Other “myths” might be that balance is the only thing that matters, or that some insanely unreasonable level of balance is required to be “ok.” Really bad balance can ruin a game, but as long as matchups are mostly within an ok range (6-4 to 4-6, some 3-7 here and there) then it’s as good as can really be expected in a game with a cast of 10 or more characters / sides / decks. People who don’t play these types of games at all, but that theorize from the outside, sometimes claim anything less than perfect isn’t good enough. Well ok, but that means you’re doomed to play much less interesting games that aren’t asymmetric.

Another similar myth is “any character less than the very best character isn’t even playable!” That’s clearly crazy to any fighting game player, yet I’ve encountered it mysteriously often in the community for my own card games. There’s lots of reasons to play a character, and often the style of gameplay that character offers really matches up with your own personal skills, so you can win with them even more than some supposedly better character, and have more fun while doing it.

Are Ken and Ryu really that different?

They are somewhat different, sure. It depends on which version of Street Fighter we’re talking, but their slightly different fireball startup times really does change how they play. They also have different moves and combos from each other (again, depending on the version). They are certainly far LESS different from each other than any two characters in the fighting game Guilty Gear, but they are different enough that it’s kind of interesting to have both.

Soon Part 2 will be posted, where he answer questions about his own company Sirlin Games and the challenges he is currently facing in the board game industry.  For more about David Sirlin, be sure to check out his web blog, Sirlin.net.