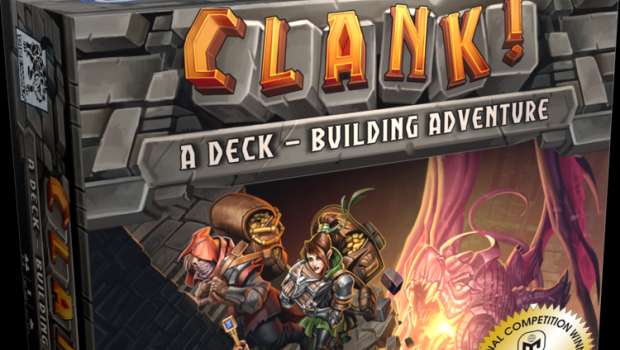 It’s hard to believe the number of deck-building games that have come from the original Dominion.  While it was great to play a game using just cards, integrating a true board into the gameplay has truly expanded how these games are played.  Clank! does this, and has earned a Mensa Select Award.

Renegade Game Studios is proud to announce that Clank! A Deck-Building Adventure has been award the prestigious Mensa Select Award during the Mensa Mind Games event this past weekend. Each year, five games are chosen by Mensa members from across the country as the top games of the year. The Mind Games competition has been held annually since 1990.

Clank! is a deck-building game that challenges players to sneak to the depths of a dungeon guarded carefully by an angry and protective dragon. Each adventurer must collect at least one artifact in order to escape, but they must do so as quietly as possible to avoid attracting the attention of the dragon. Each careless sound draws her attention, and each artifact stolen increases her rage. You can only enjoy your plunder if you make it out of the depths alive!

Designed by Paul Dennen and co-published with Dire Wolf Digital, Clank! was released in October 2016. Following an extremely successful launch, it has been reprinted numerous times and recently expanded with Clank! Sunken Treasures. This new expansion adds a double sided board, new underwater mechanics, and additional cards to continue the adventure.

“We’ve had the joy of watching many new players experience Clank! and have found that the social and the logical challenges presented by this game are very rewarding. The Mensa Awards do a great job of celebrating the use of games to explore all the facets of our mental abilities,” states Scott Gaeta, President of Renegade Game Studios. “We’re honored to be presented with this prestigious award for the fourth year in a row.”

In the past 3 years, Gravwell: Escape from the 9th Dimension, Lanterns: The Harvest Festival, and World’s Fair 1893 have all received Mensa Select Awards. Clank! is available worldwide at local hobby stores and online in a variety of regionally specific languages.

Renegade Games has published great games, and their library gets more and more impressive.  Be sure to head to their website to find out more about their games.